The Super Bowl is and has been an audacious stage for the promotion of nationalism and war.  But, this year, the tide turned against this controlled spectacle.

It caught even me off guard.  I had tuned in, and was live tweeting the event, expecting to see more over the top, in your face, symbolism and outright propaganda about the state and worship of war… and there was plenty of that but this year things changed.

It started as I expected, with the ridiculous idea of an interview, for a sporting event, with the president, Barack O’bomber, in the pre-game show.  But, even this showed some change.  Normally when they do this it is a love-fest and a completely scripted message from the president.

This year, however, showed a marked change.

Possibly due to the fact that CNN has become so unwatched that Larry King has left to Russia Today (RT) and recently stated that CNN would have better ratings if it showed cartoons, Bill O’Reilly of Fox was tapped for the interview.

Rather than the usual pablum, O’Reilly had Obama on his heels as he pressed him relentlessly on Obamacare, Benghazi and the IRS’s targeting of conservative groups.

I scratched my head as I went to grab my steak off the barbeque down here in the deep south of Mexico which I consider to be much safer than the US.  “That was strange,” I thought, “That was almost like a real interview and not the usual pre-scripted propaganda.”

Laughingly true to form, however, Obama got his one prediction totally wrong stating, “This game is too close to call, these teams are so even,” right before one of the biggest one-sided blowouts in Super Bowl history.

Then, commercial after commercial with the national anthem, US flag waving and “support the troops” themes inundated the programming all the way up to the giant American flag on the field, marching military bands and more state worship and I felt like things were getting back to normal.

The game started and other than the commercials there really wasn’t much talk about patriotism, the state and adoration for war by half time.  I tweeted the following prior to half time:

But, even the halftime show was very subdued after last year’s outright Illuminati-laiden affair with Beyonce. 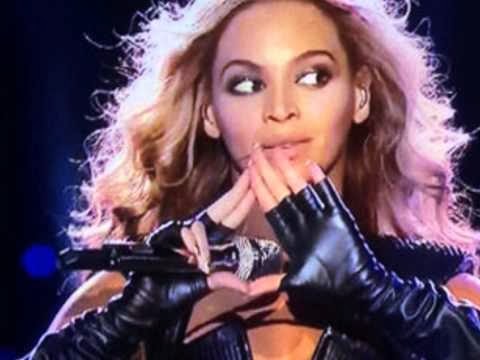 The internet went wild talking about all the Illuminati symbolism last year and this year it was clear that if they did it again they would not be able to get away with it and Bruno Mars’ performance barely had any occult symbolism.  In fact, it only had one all seeing eye pyramid (like the one on the back of the US $1 bill) and I didn’t even catch it the first time but came across it afterwards.

Of course, however, the music did stop for yet another salute to the troops … troops meaning hired murderers on welfare who have abandoned their families to go kill innocent men, women and children abroad.  But, other than that, there wasn’t much statist propaganda for the rest of the game.  I was quite surprised.

Then, as the game ended, this happened on live TV:

Now, of course, one man doing one small thing does not mean the world is awakening.  But, there is much more going on than just this man stating on TV that the US government was behind 9/11.

In an interesting aside, in TDV’s Week In Review, published prior to the Super Bowl, Justin O’Connell wrote, “Just imagine if the average American were exposed to real 9/11 questions during, say, a halftime or post-game Carroll interview. Would the entire facade about America “land of the free home of the brave” breakdown? The establishment can’t risk that…”

And he was right, the establishment can’t risk any truth or questioning of their official story on TV. But, Mathew Mills, the man in the video above made it happen anyway!  Mills explained how he got past the millions of dollars worth of security theater and onto the stage here.  Mills is involved with We Are Change, a group started by good TDV friend, Luke Rudkowski.

Changes are happening.  In fact, this is probably not the first time Malcolm Smith has heard questions about 9/11.  The coach of the Seahawks, Pete Carroll, is also a great skeptic of the official story of what happened on 9/11.

Here’s what happened, according to a couple sources: Late last spring, retired general Peter Chiarelli, who had just finished his term as the Army’s vice chief of staff, visited Carroll at the Seattle Seahawks headquarters. Chiarelli was expecting a pleasant meeting. After all, the pair had what important businesspeople tend to call synergies: Chiarelli—who grew up in Seattle—is a big Seahawks fan. His post-military work concerns traumatic brain injury research, a cause of some significance to the NFL. And both have plenty of experience leading groups of men on grand American stages.

The sit-down between Chiarelli and Carroll started off normally enough. They talked about the team, and then about head trauma. Chiarelli, who commanded the American forces in Iraq during Operation Iraqi Freedom II, talked about the brain injuries he had seen there. But Chiarelli’s mention of Iraq sent Carroll in another direction: He wanted to know if the September 11 attacks had been planned or faked by the United States government.

In particular, Carroll wanted to know whether the attack on the Pentagon had really happened. Chiarelli—who was the top-ranking Army official inside the Pentagon when American Airlines Flight 77 crashed into its western side—explained that it had. He said he had lost many colleagues. But Carroll didn’t stop there. He ran through the whole 9/11 truther litany.

“Every 9/11 conspiracy theory you can think of, Pete asked about,” said Riki Ellison, the former NFL linebacker who now runs the Missile Defense Advocacy Alliance and introduced Carroll to Chiarelli. Ellison, along with Seahawks offensive line coach Pat Ruel, was at the meeting as well. “And he didn’t stop at 9/11—he had lots of questions about the role of the military today.”

Slowly, thanks to the internet, people are getting access to real information and finally are beginning to question a lot of the government propaganda in public now.  The political and financial elites have taken notice with John Kerry recently stating, “This internet is making it hard to govern.”

Government, and governing, of course has the roots of the word in Latin from the words “guverno”, which means “to control” and “mentis”, meaning “mind”.

Government is a form of mind control and once they lose their ability to control what most people think they will lose their power.

This year’s Super Bowl had many indications that they are quickly losing that ability.  Once people awaken to the true facts about government humanity will go through a dramatic paradigm shift and transition to a much more peaceful and prosperous world.

You can make it happen in your own way, much like Matthew Mills.  Stand up to authority and speak the truth… or at least question the government.  There will be more and more Matthew Mills, Edward Snowdens, Bradley Mannings and Julian Assanges.  This will soon go exponential.

And it couldn’t happen at a better time because the US government and almost all Western governments are bankrupt and about to fail all on their own.  The more people who are aware of this the easier the transition will be.  Those who follow The Dollar Vigilante (subscribe here for in depth information on how to survive The End Of The Monetary System As We Know It) are ahead of the curve and will much more easily survive the coming Great Transition.  Those who remain asleep will be the most hurt.

Get ready for an interesting year as these transitions and awakenings continue.  2014 will not be boring.

Anarcho-Capitalist. Libertarian. Freedom fighter against mankind’s two biggest enemies, the State and the Central Banks. Jeff Berwick is the founder of The Dollar Vigilante, CEO of TDV Media & Services and host of the popular video podcast, Anarchast. Jeff is a prominent speaker at many of the world’s freedom, investment and gold conferences as well as regularly in the media including CNBC, CNN and Fox Business.