Economists will often argue that booms and busts are cyclical. Every depression or recession we’ve ever experienced in America has, usually within just a few years, been followed by booming periods of growth.

But, as the best and brightest of the financial world like to say, past performance is not a guarantee of future results.

According to a demographic study from economists at Cornell University and the Congressional Joint Committee on Taxation, the recovery that many Americans believe is taking hold right now may not actually be happening. In fact, it could take another 30 years or more…

Keep in mind that the study takes into account only the demographic factors over the next several decades and does not include additional government taxation, currency devaluation, and overall global economic supply & demand factors.

The next few decades could be uncharacteristically bleak, according to a new study.

Demographic factors — which have largely aided the U.S. economy in the past — could end up pushing incomes down for the next 30 years or more. If other factors don’t force incomes up, we may be at the beginning of the longest period of economic decline in American history.

Those numbers might sound small, but over time they would add up to a significant loss of purchasing power for the typical American and a long era of decline for the nation as a whole.

A typical worker earning $50,000 today would earn only about $48,400 by 2020 if his or her income fell by the amounts projected in the study. The worker’s income would fall to about $45,900 in 2030, $45,000 in 2040 and to less than $44,000 in 2050. In a society built upon consumer power and the idea that succeeding generations leap ahead of preceding ones—rather than fall behind them—four decades of falling incomes could be catastrophic.

The study only makes income projections relating to demographic changes.

Other changes could either offset those income declines, or exacerbate them. Future tax hikes or cutbacks in Social Security—some combination of which seems likely, to deal with mounting government debt—would reduce income even more, for instance.

It’s no secret that the middle class is dying a slow and horrible death, which will ultimately lead to impoverishment of the majority of our population. As of right now 100 million Americans are already living at or near poverty – and this is supposed to be an economic recovery!

Now take into account the continued and inevitable destruction of the US dollar. Over the last hundred years, since the establishment of the Federal Reserve, the US dollar has lost over 95% of its value. In another 30 years we can expect a further devaluation, if not an all out collapse. That reduces your purchasing power another 30% or so. In the future, you’ll be paying $10 for a gallon of gas or milk, but making less money.

And that purchasing power decrease doesn’t even take into account the increased demand on global resources for economies like China, India, Russia, and Brazil, which are adding more strain on supplies of oil and food commodities. Supply and demand alone will drive prices higher.

Finally, as the government (local, state, and federal) goes deeper into the hole, we can fully expect a number of austerity measures that will include increased taxation on individuals (think Obamacare, which has been officially labeled a tax by the U.S. Supreme Court), cuts in benefits like social security & disability, and increased regulatory fees and burdensome mandates on businesses.

Everything that is being done right now is working against us, on almost every level.

While there may be positive swings in economic growth, wages or real estate prices throughout the next thirty years, the reality is that Americans will continue to get poorer, until there is no middle class left.

We often look to the third-world for an idea of what real poverty looks like, but we don’t have to do that anymore.

This trend is now taking shape in the United States, and we’ll soon see slums like those in Detroit springing up all over the country to house the tens of millions of people who will be affected by this collapse over coming years. 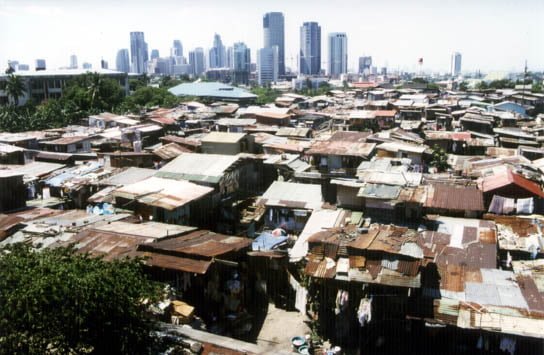 This is our future.

If we can weather the storm without riots, rebellion and bloodshed it’ll be a miracle.