This article was originally published by Tess Pennington at www.ReadyNutrition.com and is part of the Are You Ready? series of preparedness and survival guides.

This is Why We Prepare

Storms come on suddenly and have the possibility of turning into monsters.  If a person is not adequately prepared, they are gambling with their lives.  Prior to any type of disaster, a person should have at least two weeks of food, water and short term disaster supplies in their home for a unforeseen disaster.  The aftermath of this storm has the possibility of road blocks due to the snow and flooding coastal water.  If the roads are blocked, food and supplies will not be able to make it’s way into the disaster prone area until the snow and ice melt away as well as the downed power lines and debris are removed from the road.

On Februrary 9, 2010 the Northeast was hit with a major snow storm. This is what the store shelves looked like then. 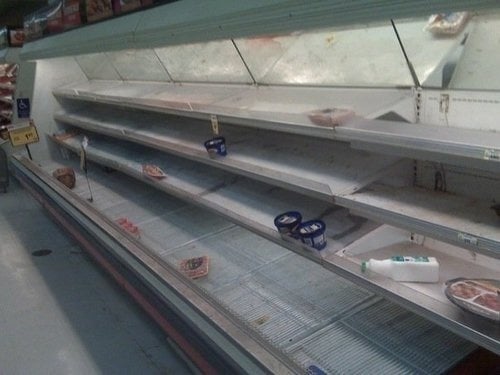 Let’s hope that many will be more prepared with this round of storms.  Although, this author has not endured a snow hurricane, per se, she has gone through multiple tropical hurricanes.  The need to be prepared for disasters is vital.  A person who waits until the last minute to gather supplies will be one who walks away unprepared and may be lucky enough to leave with a few picked over items.

Those that are not prepared should equip themselves with supplies and as much knowledge about the storm they will be experiencing as possible, prior to it occurring.  Although a snow hurricane is rare in some cases, it does happen.  Those living in the Northeast are typically used to winter storms, but not the severity of this type.

Suggestions for Preparing for a Severe Winter Storm

Some additional winter storm resources are:

Best of luck to those that are going through these torrential storm systems.  Stay warm and stay prepared!

This article was originally published by Tess Pennington at www.ReadyNutrition.com and is part of the Are You Ready? series of preparedness guides. For a complete emergency preparedness and survival plan visit the 52 Weeks to Preparedness.

More in Survival and Preparedness