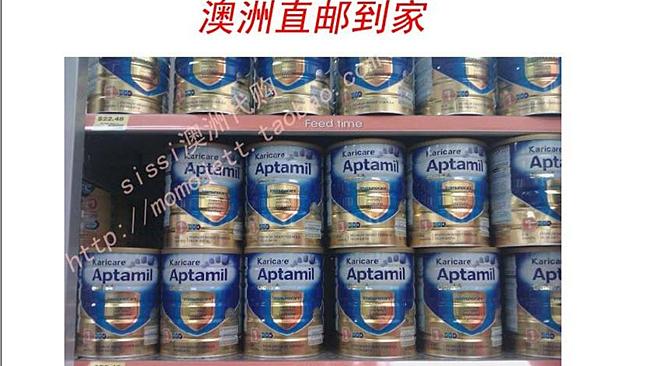 The empty shelves in the baby aisles of Australian supermarkets might lead you to believe that the continent has experienced a recent burst in population. That’s not the case, however – Chinese tourists are buying Australian infant  formula as fast as the shelves can be stocked.

This has led one large chain, Woolworth’s, to limit the amount of formula that can be purchased at one time to no more than 4 cans.

“We understand that mums need peace of mind that the supply of their chosen brand of infant formula is assured,” a Woolworths’ spokeswoman said. “Our priority is to ensure that infant formula is readily available to all of our customers.”

Meanwhile in China, cans of formula purchased in Australia for $22.49 are being resold for $37 per can. This is a profit of $90 on a case of six cans, and the buyer must add another $63 for express shipping.

Why are Chinese parents willing to spend so much money on the imported formula?

The official story is that food-safety concerns in China have moms and dads looking for better options.

A number of recent high-profile scandals involving tainted food products in China have shaken public confidence in the safety of domestic supplies. In 2009, two Chinese milk producers were executed for selling contaminated milk powder after infant formula and other products were found to have the industrial chemical melamine. Six children died and about 300,000 became ill, provoking a nationwide panic among parents.

With about 16 million births a year, China is one of the world’s largest markets for baby food and infant formula, representing around 23 percent of the $41 billion global market, according to a recent study published by Euromonitor International, a research firm in London.

Concerns about the safety of domestic supplies have led to a sharp rise in demand for imported formula among urban middle-class households, sending prices of foreign brands soaring in Chinese supermarkets. According to the United States Department of Agriculture, the retail price of a 28-ounce package of imported formula is 290 to 350 renminbi, or $46 to $56 — about 50 percent higher than most domestic brands.

(Just to emphasize a point, the FDA might want to note from the above segment: In 2009, two Chinese milk producers were executed for selling contaminated milk powder.)

The run on Australian baby formula comes in the wake of formula limits in New Zealand. Back in October, New Zealand was forced to put a “per customer” cap on the number of baby formula cans that could be purchased at one time as their supplies became depleted by Chinese customers as well.

Is China hoarding baby products merely because of the scare regarding domestically produced formula? The scare that occurred nearly 5 years ago? Or do the Chinese know something about the future availability of such goods that the rest of us don’t?