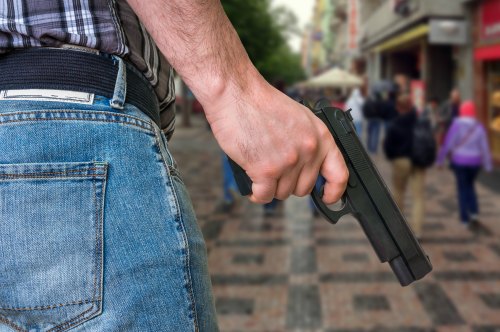 [Editor’s Note: A rising epidemic is growing in this country that no one seems to know how to quell. According to a recent study, there are more mass shootings in the United States than in any other country in the world. Equally as sobering is the fact that Americans tend to suffer from mental disorders more than any other country. Could this be coincidental?

While there is no universal definition of a “mass shooting,” one can surmise this country has a big problem and the numbers speak for themselves. Thus far, 2018 has seen close to 100 mass shootings occur across the country. The numbers are sobering to say the least and show that something is very wrong and has sprawled nationwide debates on every subject from gun control to protection.

The fact is, we have always had a false sense of security in this country and many of us are unprepared on how to handle a situation of an active shooter opening fire. The U.S. Department of Homeland Security believes in a “whole community” approach to preparedness and have created workshops to help others prepare. Civilian-based companies are also seeing the need for essential training in this matter and active shooter response training companies for schools, healthcare systems, houses of worship and businesses are trying to help others get prepared.

With mass shootings increasing, we should all have a plan in advance if faced with this type of devastating emergency. While the situation and location matter, acting deputy undersecretary, Bob Kolasky for the Department of Homeland Security is teaching a simple guideline for surviving a mass shooting: Run, hide and fight. His advice is based of studying actual cases and, while horrific in terms of imaging, the fact remains that it is up to you to prepare yourself for surviving the situation.

With that in mind, how does one survive a mass shooter? Writer, Jeremiah Johnson, who happens to be a retired Green Beret shares valuable advice on how to prepare, train and mitigate a mass shooting attack.]
Mass shootings are increasing in frequency and severity. While many are holding out hope that they will stop or that the government will handle the situation, our personal security and peace of mind continue to be under attack. This begs the question on what can each citizen of this country do to survive.

Firstly, if you’re in a state that permits you to carry, open or concealed weapons, then you have an opportunity to prevent something: that will be on you, on your state’s laws, and where you fit in between with whatever you have in your head and what your environment and social life/structure has placed in it.

While I was in the military, we learned drills to respond to a near-ambush, and a far-ambush (the latter also termed a “sniper”).  The actions are a little bit different, but we can find some tailoring to employ them for your use.  Let’s do a “near-maniac” and a “far-maniac” for our categories.

This could be loosely defined as a jerk who is starting to fire in your immediate vicinity…say within 30 feet (an approximation).  Much of this immediate action will be contingent on your situation: how many maniacs, what type of weapon(s) he or they are firing, and how the attack is being carried out.  For that “how,” I mean is it just a random spraying or is it a precise, calculated effort to place bullets into a target.  Is the maniac just shooting at anything, or is he more deliberate and calculating?  Let’s cover the basics.

A “pseudo-sniper,” usually these guys don’t have the training to effectively place a bullet in anything more than a mob targeted at random.  Nevertheless, it may be something you encounter in an open area, such as a football field or an athletic stadium of some kind, or in a public venue such as a fairground.  In that case, take these steps:

Whether a contrived false-flag operation or a genuine independent maniac, these mass shootings have been occurring more and more frequently.  Your best bet with things is to play the scenario in your mind and know what actions you will take when out and about with your family before the event occurs.  With practice and training, and if you live in a state where firearms are not an anathema to vampires of Marxism, you may be able to do some good and prevent a bad situation…at the very least, keep it from escalating and touching you and your family.  Fight that good fight to win!  JJ out!