Russian military vehicles have been photographed in the main square of Sevastopol, and there are fears that Ukraine is about to plunge into a very bloody civil war.  The pro-Russian eastern half of Ukraine is in a state of shock, and many living there are openly calling on Russia to militarily intervene to protect them against the protest groups that have seized power in Kiev.  Down in the Crimea, where approximately 60 percent of the population is ethnically Russian, militia groups have formed to protect their region from the “fascist scum running around in Kiev with swastikas“.  That quote is from a recent Time Magazine article, and it demonstrates the extreme level of tension that exists between the two halves of Ukraine right now.  Perhaps a peaceful resolution can still be achieved, but at the moment a civil war seems quite likely.  And if war does erupt, the truth is that it is going to be exceedingly difficult for Russia to stay out of it.

And Russia is not just sitting back and waiting to see what will happen.  They are actively moving military forces into position for a potential conflict.  Just check out this excerpt from an International Business Times article entitled “Russian Ships Arrive On Ukraine’s Crimean Coast As Fears Mount Over Russian Invasion In the Region“…

According to Russian news site flot.com, Russian military ships carrying soldiers have arrived on Ukraine’s Crimean coast in what some are claiming could be the early signs of a Russian coup in the hotly disputed autonomous region of the Crimea.

Russia’s large landing ship Nikolai Filchenkov has arrived near the Russia Black Sea Fleet’s base at Sevastopol, which Russia has leased from Ukraine since the fall of the Soviet Union in 1991.

The ship is reported to be carrying as many as 200 soldiers and has joined four additional ships carrying an unknown amount of Special Forces troops. Flot.com also reported over the weekend that personnel from the 45th Airborne Special Forces unit and additional divisions had been airlifted into Anapa, a city on Russia’s Black Sea coastline. In addition, it is believed that Russia’s Sevastopol base contains as many as 26,000 troops already, according to the German Institute for International And Security Affairs.

Posted below is a photograph that has been shared widely on Twitter of a Russian armored personnel carrier sitting right in the middle of the main square in Sevastopol.  Needless to say, this sends a very strong message to the new “regime” in Kiev… 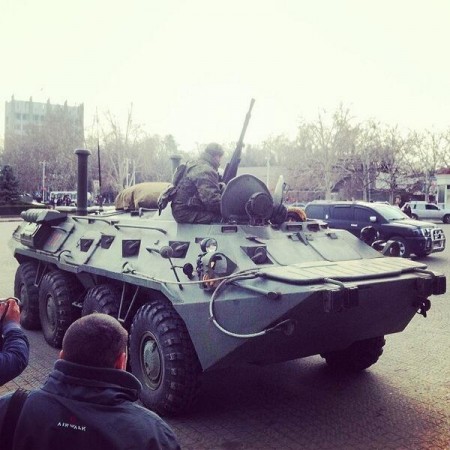 And according to the Guardian, officials have “installed” a pro-Russian mayor in the city.  In fact, this new mayor is actually a Russian citizen…

Authorities in the southern Ukrainian city of Sevastopol have installed a pro-Russian mayor as fears grow that the Kremlin may be stoking separatist sentiment in the region.

Sevastopol’s city council handed power to Aleksei Chaliy, a Russian citizen, during an extraordinary session on Monday evening while more than a thousand protesters gathered around city hall chanting “Russia, Russia, Russia,” and “A Russian mayor for a Russian city.”

Fears are spreading that separatists in Sevastopol, and the Crimean region of which it is a part, could use the power vacuum in Ukraine to seize greater autonomy and deepen ties with Russia.

It has become quite clear that Russia does not intend to relinquish control over the Crimea, and the overwhelmingly pro-Russian population down there does not want that to happen either.  In fact, many citizens down there see this as an opportunity for the Crimea to reunite with Russia…

So when the forces of the revolution took over the national parliament on Friday, pledging to rid Ukraine of Russian influence and integrate with Europe, the people of Crimea panicked. Some began to form militias, others sent distress calls to the Kremlin. And if the officers of the Berkut riot police are now despised throughout the rest of the country for killing dozens of protesters in Kiev this week, they were welcomed in Crimea as heroes.

For Ukraine’s revolutionary leaders, that presents an urgent problem. In a matter of days, their sympathizers managed to seize nearly the entire country, including some of the most staunchly pro-Russian regions of eastern Ukraine. But they have made barely any headway on the Crimean peninsula. On the contrary, the revolution has given the ethnic Russian majority in Crimea their best chance ever to break away from Kiev’s rule and come back under the control of Russia. “An opportunity like this has never come along,” says Tatyana Yermakova, the head of the Russian Community of Sevastopol, a civil-society group in Crimea.

It will be fascinating to see what happens in the days and weeks to come.

Of greatest concern to the west, of course, is the possibility of Russian military intervention in the rest of Ukraine.

At this point, western officials don’t think that Russia will intervene in Ukraine, but they certainly aren’t ruling that possibility out either…

There would be enormous risks – and Moscow would likely contemplate it only as a last resort. But it is not inconceivable that Russia could find a pretext—particularly if ethnic Russians in eastern Ukraine were violently suppressed in an uprising against decisions made by a new government. In such extreme circumstances, Moscow would probably prefer a partition that would install a Russian-friendly government in the East, arranged either by force or maneuvering behind the scenes.

If Russia does get militarily involved, it is a certainty that Ukraine will at least lose control of the Crimea.  In fact, one Russian official has already made that abundantly clear…

The Crimea region lies on the northern coast of the Black Sea. Russia’s massive Black Sea Fleet is stationed at Sevastopol and 60% of the region’s population are ethnic Russians.

Moscow earlier revealed that it would be ready to go for war over the Crimea region in order to protect the large population and army installations.

“If Ukraine breaks apart, it will trigger a war. They will lose Crimea first [because] we will go in and protect [it], just as we did in Georgia,” an unidentified Russian official told the Financial Times.

So if Russia does take military action in Ukraine, what will the West do?

Will the U.S. and the EU just sit on their hands and complain loudly?

Or will they also take military action?

This proxy war in Ukraine has already caused permanent damage to the relationship between the United States and Russia, and many believe that this conflict is planting the seeds from which World War III may eventually erupt.

Please keep the people of Ukraine in prayer.  This is a great tragedy for their nation.  And if the situation in Ukraine does descend into mass bloodshed, it could potentially set off a chain of events which would ultimately lead to global war.

Contributed by Michael Snyder of The Truth.