A Senior Russian official has leveled charges that the United States is violating the Biological Weapons Convention and doing so too close for comfort to the Russian border.

As quoted in The Moscow Times, July 20, 2013, Russia’s chief sanitary inspector, Gennady Onishchenko, has accused the U.S. of producing biological weapons in Georgia at a U.S. Navy facility that is run in concert with the Georgian government.

The facility, the Center Public Health Reference Laboratory (CPHR), is situated on a former Soviet military base and is located on the outskirts of Tbilisi. Here, the U.S. government is conducting activities in violation of the 1975 Biological Weapons Convention, Onischenko told Interfax on Saturday.

The facility opened amidst much fanfare on March 18, 2011. Andrew C. Weber, the U.S. assistant secretary of defense for nuclear, chemical, and biological defense programs, Georgian PM Nika Gilauri and U.S. Ambassador to Georgia, John Bass, were among the officials present at the inauguration of the lab, which is a mere hop from the Tbilisi airport.

The U.S. has invested over 150 million dollars in the lab which, according to the Georgian and U.S. officials, aims at protecting public and animal health through dangerous pathogens detection and epidemiological surveillance.

CPHR was built by the United States Defense Threat Reduction Agency, a part of the U.S. Department of Defense. Many concerns about this lab were raised in a 2011 article by Joni Simonishvili, entitled “Bio Weapons or Bio Health Reference Lab in Tbilisi Georgia?”

U.S. Senator Richard Lugar – a significant player in non-proliferation work – called it a storage lab for biological weapons in one of his US Senate trip reports after visiting Georgia.

Numerous indicators that the United States, a signatory to the Biological Weapons Convention, is violating this international treaty from nearly every perspective viewed was the subject of a presentation to the 7th Review Conference of the BWC in December of 2011. (Source)

The website for CPHRL reveals nothing as to the nature of the activities taking place at the lab. Here is a screenshot from Sunday, July 21, 2013. 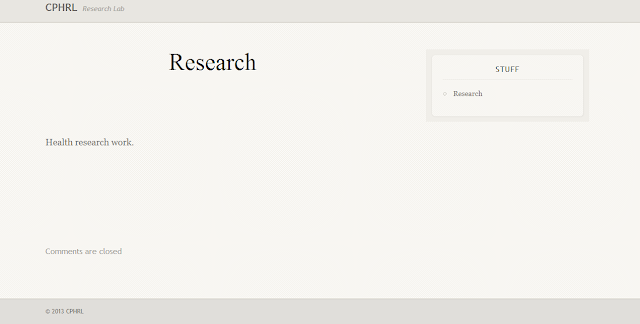 Janet Phelan is an investigative journalist whose articles have appeared in the Los Angeles Times, The San Bernardino County Sentinel, The Santa Monica Daily Press, The Long Beach Press Telegram, Oui Magazine and other regional and national publications. Janet specializes in issues pertaining to legal corruption and addresses the heated subject of adult conservatorship, revealing shocking information about the relationships between courts and shady financial consultants. She also covers issues relating to international bioweapons treaties. Her poetry has been published in Gambit, Libera, Applezaba Review, Nausea One and other magazines. Her first book, The Hitler Poems, was published in 2005. She currently resides abroad.  You may browse through her articles (and poetry) at janetphelan.com