Remember those Obamacare subsidies, the ones that were supposed to make healthcare “affordable” for Americans?

6.8 MILLION people received those subsidies under the ACA in 2014.

A nasty surprise is in store for about half of those people – an estimated 3.4 million Americans – when they file their taxes.

That’s because – OOPS – they received subsidies that were too generous. This means that the people impacted will either receive smaller tax refunds than they expected, no refund at all, or will actually OWE the IRS money.

Last Thursday, the Wall Street Journal reported that the tax preparation firm H&R Block did some number crunching and came up with the disturbing calculation:

“The ACA is going to result in more confusion for existing clients, and many taxpayers may well be very disappointed by getting less money and possibly even owing money,” the president of a tax preparation and education school told the Journal.

The reason this is happening (aside from the ACA being a seriously flawed policy in just about every way) is because the subsidies are based on PAST income. In other words, taxpayers got their subsidies prior to knowing exactly what their total income for 2014 would be. They had to estimate their income for the year when they signed up for insurance months ago – enrollments for 2014 began in October 2013. Many people didn’t know exactly what they’d earn in 2014. Experts say some guessed based on their income as far back as 2012.

Those who applied through the federal exchange received an average monthly subsidy of $264, according to the most recent figures reported by the Obama administration. They only had to pay $82 a month, on average, for coverage, Roughly 85% of total enrollees received help with insurance premiums. The administration last month said 2014 enrollment was 6.7 million.

Those who underestimated their earnings could owe thousands of dollars, though there is a $2,500 cap for those who remain eligible for subsidies. The threshold for eligibility is based on income – $45,900 for an individual and $94,200 for a family in 2014.

To add insult to injury, subsidy recipients will have to complete the mind-boggling IRS form 8962. To do this, they will use information on their insurance, subsidies, and income that will be supplied to them on Form 1095-A, which they should receive from their exchange by January 31.

If they were not enrolled in Obamacare for the entire year, they will have to break down the subsidy payments by month. 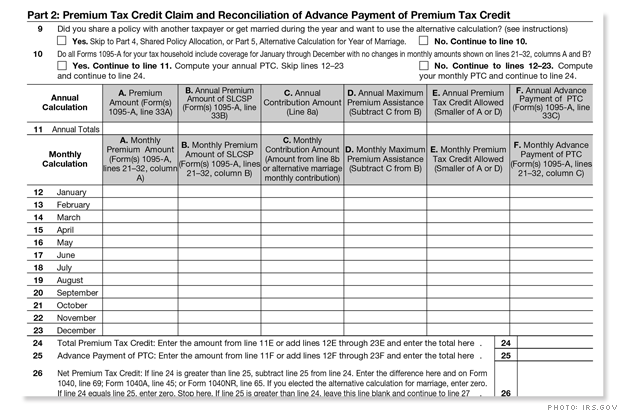 Timothy Jost, a law professor at Washington and Lee University, said things could get confusing:

“It will be very difficult for those individuals who received premium tax credits to prepare their taxes on their own and get this straight.”

Also concerning is whether the Form 1095-As will contain accurate information and whether the exchanges will send them by the end of January, said Jost, who writes about Obamacare for the Health Affairs blog.

And taxpayers can forget about calling the IRS for help. In November, IRS Commissioner John Koskinen said the upcoming filing season will be one of the “most complicated” ever. He also said that IRS funding reductions “will pose serious challenges to our customer service, enforcement efforts and information technology projects,” he said. Koskinen added that telephone service could drop from the 2014 service level of 71 percent to 53 percent in 2015, unless the IRS is provided the funds to hire staff to handle the volume of calls.

Oh, remember when some Obamacare navigators were caught telling applicants to lie about their income to get more subsidies and lower premiums? No one is sure how often that happened, but if people actually took that advice, they may end up paying dearly for it.

But all of this may not matter much come March, when the Supreme Court will decide whether the subsidies issued to residents of states that did not set up their own Obamacare exchanges are legal at all.

As Mac Slavo reported in November:

Should the Supreme Court rule against federal Obamacare subsidies the Affordable Care Act would fall apart almost instantly, as five million low-income Americans would see their health premiums jump nearly $3000 per year, making it too costly for just about everyone who depends on the subsidies.

“I think what’s important to remember politically about this is if you’re a state and you don’t set up an exchange, that means your citizens don’t get their tax credits.”

Some are promising to do what they can to repeal Obamacare and replace it with affordable, free-market options. One notable politician who is working to do just that is Mia Love, a Republican member of the U.S. House of Representatives from Utah who assumed office on January 3:

Let’s hope that by some miracle, the ACA is repealed as soon as possible, because premiums and penalties are going to increase significantly in 2015.