DHS’s ‘Visual Analytics for Command, Control and Interoperability Environments‘ or VACCINE as it’s commonly referred to, is being taught to school kids across the country. Teachers instructed by DHS are teaching K-12 students that spying on innocent Americans is ok.

“VACCINE’s mission is to educate current homeland security stakeholders and the next generation of talent… Our educational initiatives span the entire career development pipeline ranging from K-12 programs through undergraduate and graduate level work, to professional education and training programs.” (for more info. see the Teacher Tutorial section below)

Would you want your kids to be mentored by a DHS agent?

And if that wasn’t bad enough, DHS has also created a ‘Pathways Program‘ designed to indoctrinate students into accepting VACCINE, etc.

“The Pathways Programs offer clear paths to federal internships for students from high schoolthrough post-graduate school and to careers for recent graduates, and provide meaningful trainingand career development opportunities for individuals who are at the beginning of their federal service. As a student or recent graduate, you can begin your career in the federal government by choosing the path that best describes you and where you are in your academics.”

DHS will help kids see where they are in academics? Is this a sick joke?

DHS is targeting K-12 students who are interested in science, technology, engineering, and mathematics. 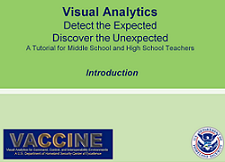 A three class period module on visualization and analytics has been developed for emergency management and homeland security elective courses for high school juniors/seniors.

DHS is targeting minorities to work on VACCINE during the summer. 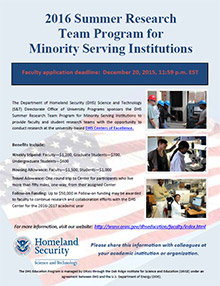 Minorities can learn about VACCCINE at Purdue University’s ‘DHS Centers of Excellence’ which trains the next generation of homeland security experts (spies).

“The purpose of (DHS) Summer Research Team (SRT) Program is to increase and enhance the scientific leadership at Minority Serving Institutions (MSIs) in research areas that support the mission and goals of DHS. This program provides faculty and student research teams with the opportunity to conduct research at the university-based DHS Centers of Excellence.”

“The DHS Centers network is an extended consortium of hundreds of universities generating ground-breaking ideas for new technologies and critical knowledge, while also relying on each other’s capabilities to serve the Department’s many mission needs. ….Each Center is university-led or co-led in collaboration with partners form other institutions, agencies, national laboratories, think tanks and the private sector.”

DHS has re-packaged VACCINE in schools across America calling it HS-STEM.

“In 2010, the VACCINE HS-STEM program will specifically recruit students in visualization sciences.”

The Committee on STEM Education (CoSTEM), comprised of 13 agencies—including all of the mission-science agencies and the Department of Education—are facilitating a cohesive national strategy, with new and repurposed funds, to increase the impact of federal investments in five areas:

2. Increasing and sustaining public and youth engagement with STEM;

DHS wants to use television to indoctrinate kids and parents about VACCINE.

In 2016, the DOE and DHS announced that its ‘Ready-to-Learn Television‘ grant competition would be used to indoctrinate kids and parents.

1. Facilitate school readiness and academic achievement by supporting the development andnational distribution of educational television and interactive media programming for preschool and elementary school children and their parents;

2. Develop and disseminate educational outreach materials and programs that are designed to deepen and extend the effectiveness of the educational television and interactive media and

3. Build social and virtual communities of parents, educators, and children devoted to using the media materials.

“Ready-to-Learn aims to take advantage of common mass media consumer technologies in order toreach children in low-income homes who may be lacking in educationally-rich learning opportunities and make it easier for parents, caregivers, and early learning providers to find trustworthy materials that they can use with the children in their care.”

DHS to use storytelling and interactive gameplay to indoctrinate our kids into accepting VACCINE.

“Experts in subject matter and pedagogy, instructional designers, formative researchers, and other educators will work side by side and on equal footing with creative and media production expertsin areas such as storytelling and interactive gameplay in order to merge their contributions into a unified and integrated effort.”

It’s like DHS has taken Nazi Germany’s playbook and re-wrote it to indoctrinate school kids and parents. The Nazi’s (DHS) only allowed teachers and professors to teach students about Nazi (DHS) ideology.

Philosopher Stephen Hicks description of how the Nazi’s indoctrinated school kids should serve as a warning to everyone.

“Students were trained in Nazi ideology, studied German history from a National Socialist perspective, learned political activism, and trained themselves to develop a selfless, obedient, duty-oriented moral character. The curriculum was revised, textbooks re-written, and teachers trained as servants of the cause. Early in the Nazi reign, teachers were declared to be civil servants and required to join the National Socialist Teachers League, swearing an oath of absolute fidelity to Adolf Hitler.”

Does this remind you of Common-Core or VACCINE?

This is part 2 of a four-part series.