Americans’ perception of President Obama’s economic policies are on the mend according to a new report from CNN.

“For the first time since President Obama took office,” says journalist Matt Egan, “a significant majority of Americans give the economy two thumbs up.”

The findings are based on a poll conducted by CNN/ORC.

According to the poll 52% of Americans described the economy as “very or somewhat good.”

By CNN standards this is considered a “significant majority.” So significant, in fact, that the network contends it is great news from Hillary Clinton’s Presidential campaign because it shows how successful Democratic programs have been.

And things are only going to get better from here.

On top of that, Americans think the sunny economy will keep going. Over two-thirds of those polled believe the economy will be in good shape a year from now, compared with 38% who say it will be in poor shape.

The findings are the result of several factors including more jobs, healthier economic growth and cheap gas.

But what if, for the sake of argument, the factors CNN cites are complete conjecture?

Jobs, jobs, jobs: It’s no secret that people feel better about the economy when they’re confident they can get a job.

After years of sluggishness, more than 2.95 million jobs were created last year, making it the best year of employment growth since 1999.

Michael Snyder recently noted that the unemployment numbers are a massive lie. One cannot cite job creation as a measure of economic health without also mentioning job losses and population growth rates. Since 2008, according to Snyder, our population has grown by 16.8 million people but there has been a net loss of 140,000 jobs. It’s also important to note that the jobs which have been created are most part-time or low wage. Moreover, the reason the official unemployment rate is going down is because the government considers millions of long-term unemployed workers to “no longer be in the labor force.” Currently, a record 101.6 million working-age Americans are not working.

Finally, if we look specifically at last year, net job gains are nowhere near what CNN says they were. Last year’s entire net gain, when we include all the data and not just the cherry-picked statistics, is about 218,000 jobs. Now, that is a “significant” difference in what CNN claims actually happened.

The average price of a gallon of gasoline has plunged 34% over the past year, according to Federal Reserve data.

Yes, gas is cheaper. But from a realistic perspective, the savings are not that much and they are most certainly offset by health care costs which have tripled for many working families. The average yearly gas savings are roughly $600, or about $50 a month. Sure, it helps, but not to the degree being touted by mainstream media. In fact, the lower gas prices may do more harm than good as hundreds of jobs are now at risk and defaults for oil and gas exploration companies loom. According to one analyst, the negative effects of lower gas prices are spreading like a cancer.

The government’s official statistics say the U.S. economy is growing again, but let’s get real.

That means our economy is not growing, but rather, has been shrinking for over a decade. 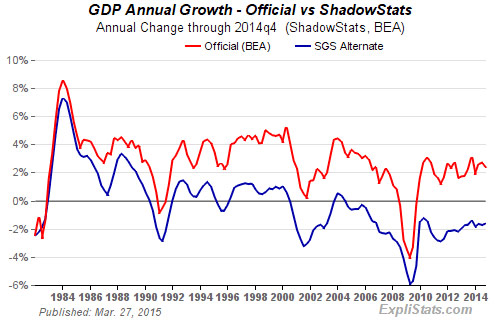 CNN goes on to cite other factors like improved consumer confidence and rising stock markets.

But as we know, consumer confidence has only improved because literal trillions of dollars have been injected into the marketplace in the form of credit for things like electronics, houses, cars and education. That tap is starting to run dry.

And when the credit locks up, so too will any remaining momentum in the economy.

Further, should the Federal Reserve stop injecting money into the economy we would very quickly see a reversal in stock markets.

So, while a “significant majority” of Americans think the economy is doing good and even more people think it’ll be better next year, the stark reality is more than likely the exact opposite.

The end game is close and a lot of very influential people are warning that the economy is in serious trouble. Former Federal Reserve Chairman Alan Greenspan, who has been credited as the architect of America’s modern day monetary policy, says that we will soon experience a significant market event and that something big is going to happen.

And he’s not alone, elite individuals all over the world are preparing exit strategies for what many believe will be breakdowns of civil order when the global economy finally does tank.

While they all have played their part in bringing about the current and continuing imbalance that is tipping the world towards social chaos, none of them want their own families to be caught up in it. Hence, they are hastening to buy up what they believe to be remote and relatively safe locations, where they can put a hideaway, retreat or survival station until the world regains its senses. New Zealand tends to come up a lot, but there are other hidden areas, too, where a few million dollars can still be a landing strip, a farmhouse or a homestead worthy of an “elite.”

And the government, especially here in the United States knows something is coming and they have been actively simulating the collapse of our economy and potential for widespread violence.

While the propaganda for why everything is fine and why the economy will only get better from here continues to convince millions, the facts show that things may not be as peachy as they would have us believe.

The media tells us one thing. But the actions from elite politicians, business leaders and officials suggest that America about to change in a major way.

Perhaps, just in case they are right, it’s time to finalize your preparedness plans. Because if things really are as bad as we and others have detailed over the years, then we’re about to experience an environment even more economically difficult than the great depression.

When Real Disaster Strikes: These Are The People Who Will Loot, Pillage and Kill You For Your Food

America Is About To Change In a Major Way: “Everything That Can Be Shaken Will Be Shaken”

Worst Case Scenario: Total Chaos… Followed By An International Intervention To “Save Us” From Ourselves

12 Survival Lessons from Ukraine: “Nothing Provides as Much Valuable Information as Real World Situations”