When most of us hear the word “arsenic”, we immediately think “poison” – and for good reason.

Arsenic is a naturally occurring semi-metal element widely distributed in the earth’s crust. It is found in rocks, soil, water, air, plants, and animals.

Natural activities such as volcanic action, erosion of rocks, and forest fires can release arsenic into the environment.

Approximately 90 percent of industrial arsenic in the U.S. is currently used as a wood preservative, but arsenic is also used in paints, dyes, metals, drugs, soaps and semi-conductors. High arsenic levels can also come from certain fertilizers and animal feeding operations. Industry practices such as copper smelting, mining and coal burning also contribute to arsenic in our environment. (source)

Arsenic is odorless and tasteless, and it enters drinking water supplies from natural deposits in the earth or from agricultural and industrial practices.

According to the EPA, certain regions of the U.S. have higher levels of arsenic:

Compared to the rest of the United States, western states have more systems with arsenic levels greater than EPA’s standard of 10 parts per billion (ppb). Parts of the Midwest and New England have some systems whose current arsenic levels are greater than 10 ppb, but more systems with arsenic levels that range from 2-10 ppb. While many systems may not have detected arsenic in their drinking water above 10 ppb, there may be geographic “hot spots” with systems that may have higher levels of arsenic than the predicted occurrence for that area.

In their report titled How politics derailed EPA science on arsenic, endangering public health, The Center for Public Integrity covered the political motivation and interference with improved drinking water standards.

Urine samples collected by the Centers for Disease Control and Prevention from volunteers reveal that most Americans regularly consume small amounts of arsenic. It’s not just in water; it’s also in some of the foods we eat and beverages we drink, such as rice, fruit juice, beer and wine.

The EPA has been prepared to say since 2008, based on its review of independent science, that arsenic is 17 times more potent as a carcinogen than the agency now reports. Women are especially vulnerable. Agency scientists calculated that if 100,000 women consumed the legal limit of arsenic every day, 730 of them would eventually get bladder or lung cancer from it.

After years of research and delays, the EPA was on the verge of making its findings official by 2012. Once the science was complete, the agency could review the drinking water standard.

The EPA was preparing to make their findings public in 2012, but an investigation by the Center for Public Integrity found that one member of Congress blocked the release of those findings and in turn, any new regulations:

Mining companies and rice producers, which could be hurt by the EPA’s findings, lobbied against them. But some of the most aggressive lobbying came from two pesticide companies that sell a weed killer containing arsenic.

The EPA had reached an agreement with those companies to ban most uses of their herbicide by the end of last year. But the agreement was conditioned on the EPA’s completing its scientific review. The delay by Congress caused the EPA to suspend its ban. The weed killer, called MSMA, remains on the market.

Turning to a powerful lawmaker for help is one tactic in an arsenal used by industry to virtually paralyze EPA scientists who evaluate toxic chemicals.

The following graph shows how many people out of 100,000 would eventually get cancer if they consumed the current EPA drinking water limit every day for these carcinogens. The risks from arsenic exposure are shockingly high compared to other known toxins: 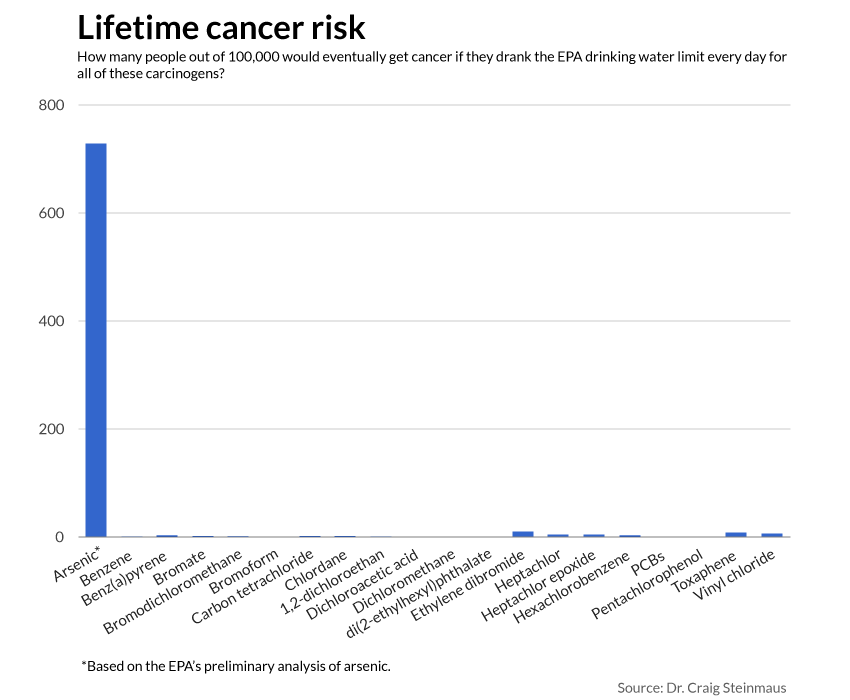 The immediate symptoms of acute arsenic poisoning include vomiting, abdominal pain and diarrhea. These are followed by numbness and tingling of the extremities, muscle cramping and death, in extreme cases.

The first symptoms of long-term exposure to high levels of inorganic arsenic (e.g. through drinking-water and food) are usually observed in the skin, and include pigmentation changes, skin lesions and hard patches on the palms and soles of the feet (hyperkeratosis). These occur after a minimum exposure of approximately five years and may be a precursor to skin cancer.

Other adverse health effects that may be associated with long-term ingestion of inorganic arsenic include developmental effects, neurotoxicity, diabetes and cardiovascular disease.  (source)

Clearly, the government will continue to interfere with the implementation of higher standards for water quality.

To avoid or minimize exposure, there are things that we can do:

1. Limit rice consumption: Studies have shown that all rice, organic and conventional, has a high level of naturally occurring arsenic and can also be contaminated by arsenic-containing pesticides. Limit or avoid using brown rice syrup as a sweetener. Avoid consumption of rice milk: Consumer Reports tested two common brands for arsenic and found that all samples exceeded EPA’s drinking water limit of 10 parts per billion. The range in rice milk was 17 to 70 parts per billion.

3. Limit fruit juice consumption: Arsenic-based pesticides were used on fruit orchards in the early 1900s, and soil contamination remains an ongoing source of arsenic in tree fruits and grapes. Testing shows that some samples of apple, grape, and pear juices and juice blends have moderate amounts of arsenic.

4. Buy organic chicken. Arsenic is sometimes administered in conventional chicken farming to promote growth, add pigment to flesh, and prevent disease among chickens kept in close quarters. The arsenic gets into the meat and also in the water supply near these industrial farms, which means there is more arsenic in your food and in the environment. The use of arsenic is prohibited in organic farming, so buying organic chicken helps reduce your exposure. (source)

5. Test the soil in your yard: If you have a deck, playset or garden beds made from pressure-treated wood sold before 2004, the soil in your yard could be contaminated with arsenic. Pressure-treated wood sold for home use prior to 2004 contained chromated copper arsenate, or CCA, which prevented insect damage and rot. It’s been banned since then because it was found that over time it released toxic arsenic into soil and even children’s hands as they played on the structures. (source)  Arsenic soil test kits can be used to see if your yard is contaminated.

Don’t count on the government to protect you and your family from arsenic (or any other) toxic substances. Political interests and corruption interfere with research and the development of truly safe standards.