Our slavery is ingenious because it’s so very subtle. Most people not only don’t see (much less feel) their shackles – they get angry when someone calls attention to them. Most people, in other words, still imagine themselves to be free. This despite the obvious fact that they must first beg – and obtain – permission before they may exercise any of their former natural rights. 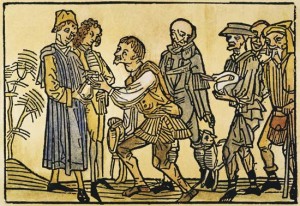 Even the elemental right to choose your spouse, for instance, is no longer a natural right; the state demands the couple seek its permission to marry. Exactly as feudal lords once demanded of their serfs. And serfs we have become.

One reason to do it officially – that is, to beg the state’s permission – is simply to have the legal standing in case, for example, your spouse falls ill. An officially anointed husband (or wife) has specific legal rights that a non-sanctioned (by the state) “partner” does not. And of course, there is the issue of taxes and the disposition of property following the death of a spouse.

The concealed carry handgun permit is exactly similar to the marriage permit. They are both usurpations of natural rights in that they force you to beg permission to exercise your (former) natural rights – and strictly define and delimit how you may exercise these ex-rights. It is the same as regards now-conditional property rights, the former right to travel freely, to speak (and even write) freely… and on and on. These things are now privileges that require permission.

As noxious as all that is, the alternative is even worse: Fail to get permission and your rights disappearcompletely, insofar as any obligation of the state to respect or even acknowledge them. To put a finer point on it, you can expect to be punished for any attempt to exercise your former natural rights.

They not only get you coming and going – they got you before you got going.

If your wife is severely injured or falls seriously ill, for instance, and has been taken to a hospital you have no legal standing to take decisions as regards her treatment – if you are not legally married in the eyes of the state. You may have exchanged vows – you may have done so in the presence of witnesses and clergy. Irrelevant – as a matter of law – absent the state’s permission slip. In which case, if your spouse is seriously ill and cannot make her wishes known, the wishes of her family – as defined by law, which means, her parents or other next of kin – take precedence over your wishes. And if there is no “legal” family – then the wishes of the state will decide. You are nothing more than a bystander. You don’t even have the right to see her in her room. If her father – or the doctor – does not like you, he may legally prevent you from seeing “your” wife – because technically, you are not her husband. 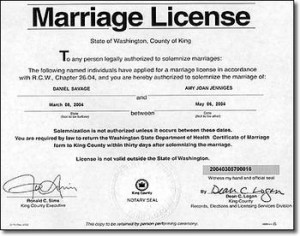 Thus, people beg the state’s permission. Much worse, they have accepted this as normal and reasonable. They do not  take umbrage – or even become mildly annoyed. Many – all too many – take pride in having begged for (and received) their permission slips. In having acquired a birth certificate (of ownership) for their children. A driver’s license, a Social Security number…. and so on.

Guns: At one time – and still within living memory – the natural right to possess and bear (carry, in modern terms) a firearm was explicitly and implicitly acknowledged and respected. Not only was there no law limiting any citizen’s right to possess and carry, it was taken as agiven  that free men need no permission to possess and bear arms. Before November 1963, one could even order a gun through the mails and have it delivered directly to one’s home. After November, 1963, prior restraint began to be exercised against everyone because of the actions of one. The former natural right to possess a firearm became a conditional privilege – requiring a permission slip . If one wished to bear – that is, carry – the firearm beyond the borders of one’s home, a permit was required.

Ignore  “the law” – and get caught exercising your natural right to carry a weapon on your person without having made the proper supplications first – and you will discover exactly how much credence the state gives your ex-rights. You will be charged as a criminal – for acting as a free man.

Because freedom is illegal.

As with the practical necessity of obtaining the state’s permission/sanction to wed whom you wish and have the union respected (somewhat) under the law – or to possess/carry a firearm –  it has become a practical necessity to – in effect – concede that you have no rights in order to be permitted the conditional use of any of them. You cannot operate – or even own – a car without the requisite permission slip. You may not legally even make improvements to “your” home without first obtaining a by-your-leave. Your food must be approved. You may only transact business if you have permission to do so – and only under certain conditions. It is not possible to live anymore without first having begged permission.

This is the evil genius of the system.  It gets people to acknowledge that they have no rights by getting them to beg permission to exercise them.

For if you have a right to something, then by definition you do not require permission to exercise that right. And more – the state (organized force) has no standing – under natural law – to use force to limit the exercise of that right in any way whatsoever. But the reverse is just as true. By having conceded that you need to beg permission, you become party to a binding legal contract – whether you see it that way or not is immaterial.

You have accepted the state’s rights – by giving up yours.

The satanic brilliance of the system we live under is that it has transformed all of our former natural rights into conditional privileges – and we have signed on the dotted line. Given our consent – by accepting the premise. The most vicious part of this devil’s deal is that few people are even aware of the flim-flam. They actually feel empowered when, for example, they obtain a CC permit. Or a permit to exercise their ex-right to free speech (in a “free speech zone,” of course). 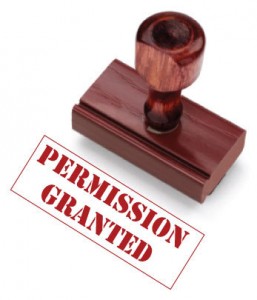 The system leaves free men but one alternative – to act as free men and damn the state to hell. This of course, is no easy thing. In fact, it is a very hard – a very dangerous thing.  As it was for the lone hero who stood in front of that tank in Tiananmen  Square back in 1989. As it was for the White Rose (just kids, really) resistance in Nazi Germany. They painted slogans like “Freedom!” on the walls – and paid for it with their lives.

Free men do not beg permission. They insist that their rights be respected. Come what may.