August 18, 2012 – RT recently aired a piece titled, “Homemade bombs beat high-tech? Afghan war failure looms,” in which the astronomical amount of money spent on military weapons systems is examined versus the apparent inability of the US to “win” in Afghanistan.

In all likeness the US’ inability to “win” reflects a failure to balance the weakening of armed resistance to occupation with the propping up of a suitable proxy government. And when fighters are taking up weapons simply to see off foreign invaders – something Afghans have been doing perpetually throughout their history – it would seem that the US, despite all it’s military prowess, would need to impossibly scour every crack and crevice to eradicate every man capable of picking up arms and fighting.

If this sounds like a familiar narrative, it’s because the United States fought a similar war in Southeast Asia spanning Laos and Vietnam. Dr. James William Gibson, author of the book “The Perfect War: Technowar in Vietnam,” was interviewed in 1987 by “Alternative Views” and gave an in-depth cautionary history of a war driven by a “production process” mentality, complete with quotas motivating soldiers, driving commanding officers, and directing policy makers, all within the backdrop of reasserting a slipping global imperial paradigm.

Gibson points out the obvious flaws of using a “production process” approach towoard war. Soldiers motivated to meet quotas for body counts will fabricate numbers, or worse yet, take innocent life in an increasingly desperate and degenerate bid to survive (missed quotas meant more time spent out in the field). Officers likewise will make tactically fatal decisions in pursuit of meeting these irrational quotas in their sycophantic bid to climb up the military hierarchy.

The vector sum is a war not based on the just cause of national defense, nor driven by actual achievable strategic objectives, but a war motivated by opportunistic interests attempting to profit from the “rules” set by policy – from the soldiers on the ground seeking the “payment” of survival, to the officers managing the conflict seeking advancement, to the corporations and their representatives at the top seeking profits and geopolitical corporate-financier hegemony. In this way, the war can take on a life of its own, a dangerous tropism.

The Vietnam and Afghan Wars were never wars of national defense. They were military adventures sold to the public as “necessary” for national defense. In reality, each in turn was a response to shifting geopolitical spheres of influence and the ruling elite’s desire to dominate them. In Vietnam, the goal was to reassert Western influence over the Vietnamese who were setting a dangerous anti-imperialist precedent for the world.

In Afghanistan, the goal appears to be a means of projecting US power against Iran, Pakistan, and even up to the gates of China itself. It has served as a point of geopolitical leverage, destabilization, reordering, and chaos in a region that may have otherwise moved forward together, shaping a multipolar global order that checked or negated the hegemony of Wall Street and London. 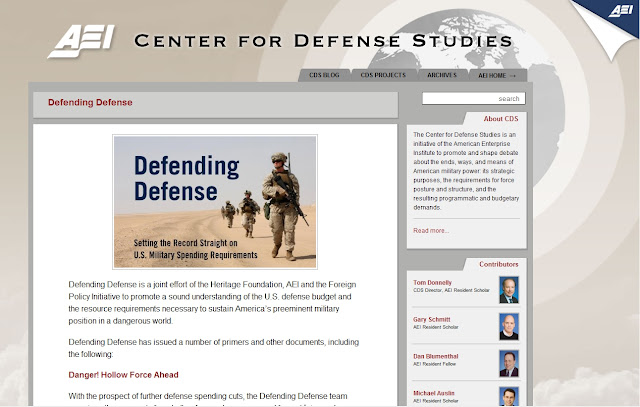 Image: The Fortune 500’s newly launched lobbying front, “Defending Defense.” It, in reality, is designed to defend only the bottom line of the military industrial complex and the immense, unwarranted power it has procured and projects globally.

It too has taken on a life of its own, with profiteers and opportunists seeking its preservation, even expansion to justify increasing bottom lines. For example, “Defending Defense” is a lobbying front assembled by the American Enterprise Institute – a think-tank with Fortune 500 interests fully represented upon its board of trustees, advisory council, and “national council.” The lobbying effort not only cites current wars the US is fighting, but cites future potential wars that require yet more money to be shifted from productive peaceful progress, to the pursuit of hegemonic megalomania – because it is not just about war profits, it is about the power derived in the pursuit of global preeminence.

The goal of propping up a proxy government in Vietnam failed, leaving millions dead, with Americans bled dry both literally and financially in the process. The military industrial complex, however, came out only stronger.

Today, these same corporate-financier interests are doing it again. And when asked the question, “have we learned anything in Vietnam?” many people imagine it is posed rhetorically to our leaders.

These leaders have learned the perfect balance of war profiteering, managing public perception, and eliminating political dissent. They have learned that the war must be fought against the people at home just as vigorously as it is fought abroad.

On the battlefield, they have mastered the art of motivating officers seeking promotions, willing to say, do, or believe anything in order to proceed up the next rung. They’ve managed to push soldiers just enough to keep them in line and on mission, but not too much to where widespread meaningful dissent forms. And as Dr. Gibson pointed out in his 1987 interview, in the “production process” of war, soldiers are easily replaced, so with today’s repeated tours of duty, we see merely the system maximizing return on investment.

Indeed, our leaders have learned much from Vietnam. They are on their way to perfecting the “technowar.”

Continue Reading
You may also like...
Related Topics:IED, military, Vietnam