The Orlando mass murderer, Omar Mateen, worked for G4S, one of the largest private security employers in the world. G4S has some 625,000 employees spanning five continents in more than 120 countries. As a private security company it provides services for both governments as well as corporations. Some of its well-known contractors are with the British Government, the United States, Israel, Australia and many more. G4S providers a range of services in the areas of corrections, policing, and security of important facilities. In the corporate sector it has worked with such well-known companies such as Chrysler, Amtrak, Apple, and the Bank of America.

A statement from G4S, published by The Independent June 12 says that:

“We are shocked and saddened by the tragic even that occurred at the Orlando nightclub. We can confirm that Omar Mateen had been employed with G4S since Sept 10 2007. We are cooperating fully with all law enforcement authorities, including the FBI, as they conduct their investigation. Our thoughts and prayers are with all of the friends, families, and people affected by this unspeakable tragedy.”

Mateen worked with the company since 2007. G4S provides security personnel for the Department of Homeland Security, US Customs and Border Protection at the US-Mexico border, and helps transport undocumented immigrants from urban areas.

Mass killings like the one in Orlando directly benefit private security firms like G4S by increasing fears and demands for higher security services. Estimates are that over $200 billion is spent on private security globally with higher amounts expected yearly. The industry currently employs some 15 million people worldwide.

G4S offers security guards, alarms, management and transportation of cash and valuables, prison management, and electronic monitoring of offenders in 120 countries worldwide. They are the second largest private employer in the world. Their annual revenue in 2014 was $10.5 billion. Increasingly G4S operates in “complex environments” and accepts jobs national armies are not trained to do like land mine clearance, and military security in active war zones.

Chevron Oil in Nigeria contracts with G4S for counter insurgency operations that deploy armed groups of fast-response mercenaries both on land and on delta water patrol boats mounted with machine guns. G4S maintains a similar operation in South Sudan. G4S also provides surveillance equipment to checkpoints and prisons in Israel. 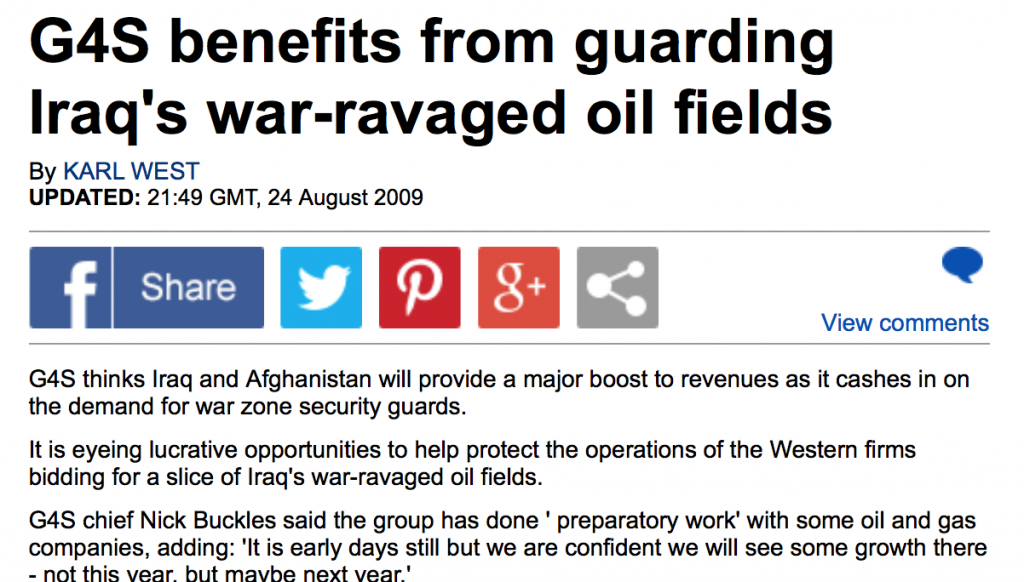 G4S has been plagued with problems in the last decade, most noticeably with the botched contract at the 2012 Olympic Games in London. They failed to provide the 10,000 plus trained employees they had promised under contract. Instead G4S had roughly 2,000 people properly trained, with many more getting only a few weeks’ worth of preparation. The result led to the British Military being called in to provide security with some 13,000 troops alongside G4S.

In June of 2014, G4S was accused of violently removing protesters from outside its own offices in London, a claim the company denies, and a few months after that G4S had to pay $100,000 for unlawfully restraining youths in a secure training facility. In 2011, a double amputee was improperly secured in one of G4S’s ambulance services and died when the unsecured wheelchair tipped over backwards as he was being transported to the hospital.  It was found that the G4S staff was not sufficiently trained to move patients safely from their homes to hospitals. And as far back as 2004, a 15-year-old died when three G4S employees at Rainsbrook Secure Training Center restrained him. None of the officers were charged in that incident.

G4S is a transnational security company in direct service to the global corporations and the transnational capitalist class. G4S protects capital and assets around the world and is increasingly taking a private military style approach as needed. As a multi-billion-dollar public company major investors come from the financial core of the transnational capitalist class including; Blackrock, UBS, Vanguard, Barclays, State Street, Allianz, J.P. Morgan Chase, Credit Suisse, and FMR. Even the State of California and New York have holdings in G4S. Nine of the thirteen largest most connected money management firms and banks in the world have direct investments holdings in G4S. Omnicom, the largest public relations and propaganda firm in the world, handles media for G4S and undoubtedly is currently in full crisis management mode to protect the company and minimalize links to Omar Mateen. 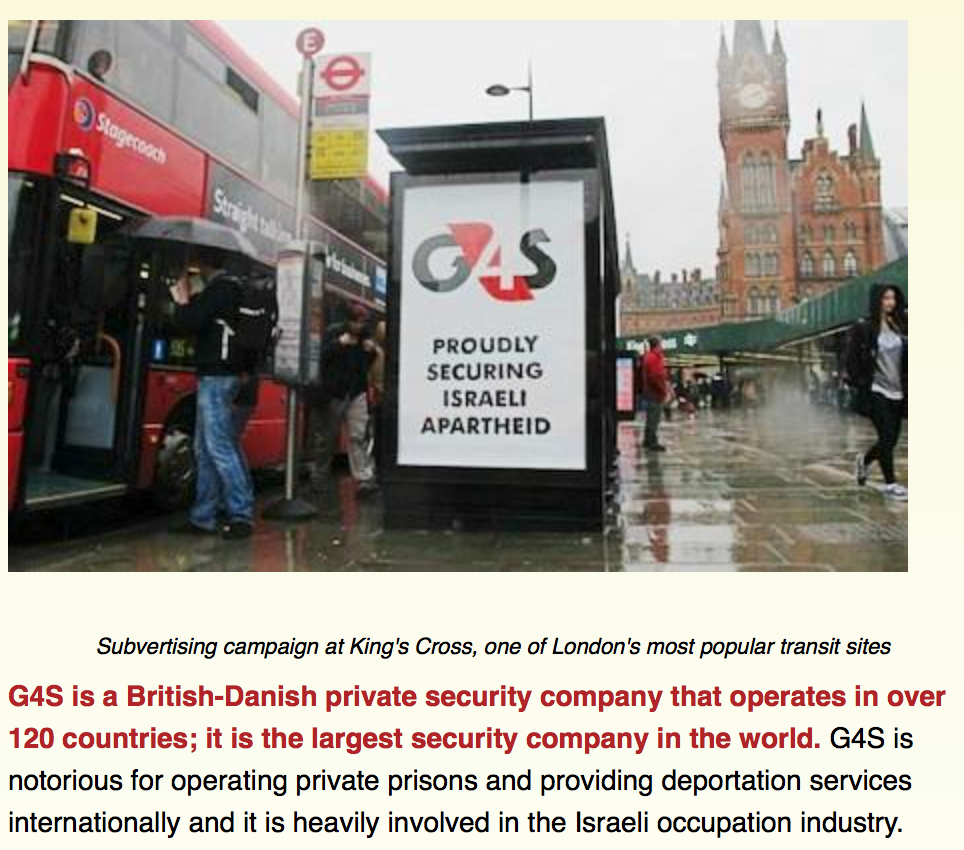 G4S is a part of neoliberal imperialism that is leading to the substitution of and privatization of state police. Inside G4S’s 625,000 employees are undoubtedly a number of reactionary individuals with extreme racist, homophobic, and xenophobic feelings similar to Omar Mateen. These folks are armed walking time bombs that can individually or collectively unleash disruption and chaos on humans anywhere in the world. The resulting chaos and fear will be used to justify even more demands for private security, including even martial law, all resulting in improved profits for G4S.

Peter Phillips is a Professor of Political Sociology as Sonoma State University, president of Media Freedom Foundation/Project Censored and Research Associate of the Centre for Research on Globalization (CRG).

Contributed by Global Research of Centre for Research on Globalization.

The Global Research website was established on the 9th of September 2001, two days before the tragic events of September 11. Barely a few days later, Global Research had become a major news source on the New World Order and Washington’s “war on terrorism”. The site publishes news articles, commentary, background research and analysis on a broad range of issues, focusing on social, economic, strategic and environmental issues.

The Global Research website was established on the 9th of September 2001, two days before the tragic events of September 11. Barely a few days later, Global Research had become a major news source on the New World Order and Washington’s “war on terrorism”. The site publishes news articles, commentary, background research and analysis on a broad range of issues, focusing on social, economic, strategic and environmental issues.