If one thinks that the Centers for Disease Control (CDC) and the National Institute of Health (NIH) are merely tax-supported guardians at the gate protecting the public’s health and welfare, then one is seriously deluded and naive. These two rogue organizations are proving to be as greedy, cunning and evil as Goldman Sachs and they, as well as Bill Gates, are preparing to usher in an Ebola pandemic accompanied by mandatory vaccinations and quarantines enforced through the use of lethal force.

When it comes to Ebola, one only has to follow the publicly available data trail in order to understand what is coming regarding what will prove to be the scourge of the 21st century.

The present data trail tells us that the CDC owns the illness and all variants known as “Ebola”. Since the CDC owns Ebola, anyone attempting to treat Ebola, within the United States, must pay a royalty to the CDC. The data trail also reveals that NIH owns the Ebola-related vaccines developed by Crucell and these vaccines were clinically tested on two groups of human volunteers in 2006! This means that an Ebola vaccine has been available for eight years rendering the present stories about vaccine development by Monsanto and GSK to be a cover story.

We also now know that the Bill and Melinda Gates foundation has put $560 million into the Global Fund which will be in charge of globally distributing and managing the disbursement of not only the Ebola vaccine, but the soon-to-be released HIV and TB vaccines as well. The fact that the U.S. Army Medical Research Institute of Infectious Diseases (USAMRIID) is involved suggests that either the Ebola virus, or the vaccine, or both, have been weaponized.

It is time for a “common sense” quiz. Do you think that these aforementioned entities are going to expect a return on their collective investments? If the obvious answer is “yes”, then it is a foregone conclusion that millions of Americans are going to be victims of this Hegelian Dialectic and subsequently infected with the virus in order to set the stage for enormous profits derived from the implementation of the mandatory vaccine and the forced incarceration for the non-compliant.

Health Conditions Used As a Tool of Political Subjugation

Executive Order 13295 was amended by President Obama on July 31, 2014. Subsection (b) was replaced with the following:
“(b) Severe acute respiratory syndromes, which are diseases that are associated with fever and signs and symptoms of pneumonia or other respiratory illness, are capable of being transmitted from person to person, and that either are causing, or have the potential to cause, a pandemic, or, upon infection, are highly likely to cause mortality or serious morbidity if not properly controlled. This subsection does not apply to influenza.”

The later interpretation of Executive Order 13295 finds that anyone with Asthma, temporary upper respiratory illness and pneumonia can, and will be, quarantined. Asthma? Asthma is not contagious in any form. It is genetic, but not contagious. However, an estimated 10% of the population has asthma in some form. Considering the fact that is not contagious but widespread, it is likely that this Executive Order provides a means for administration to eliminate a  chunk of dissidents by enforcing the asthma, upper respiratory infection and pneumonia patient quarantine policies of this executive order. None of these conditions have nothing to do with Ebola, however, the potential for political abuse should be apparent. Additionally, all health records are now sent to the IRS under Obamacare policies and procedures. This is strongly suggestive of prior planning along these lines.

Operational Details of the Coming Quarantine and Subsequent Martial Law

DHS will be in charge of the coming quarantines and martial law implementation. Yes, this means that the military will be subservient to the DHS dictates. The simple reason for this development is that Obama trusts the DHS a lot more that he trusts the military. Remember, Obama has seen fit to fire over 260 senior command officers.  One of my former military sources has introduced to me, in the very early hours, of December 21, 2013, a General who was fired on December 14, 2013. The fired General’s  job, among other duties, was to coordinate the various national guard units into a cohesive fighting force and to uniformly respond to a national threat (i.e. a pandemic outbreak). The performance reviews of this general had been stellar. However, he had seen an increasing Department of Homeland Security usurping of his authority over the past couple of years. As he related to me, the major problem started when he was ORDERED BY DHS TO STAND DOWN AND TURN OVER CONTROL OF THE NATIONAL GUARD EMERGENCY RESPONSE OPERATIONS PLANNING TO DHS.  When he refused to sign off on the transfer of operational protocols, without the President’s or a Joint Chief’s signature ordering him to do so, he was fired. If he had been given these orders from the chain of command he said he would have uniformly transferred National Guard authority to DHS. HE WAS FIRED BY DHS! SINCE WHEN DOES DHS RUN THE MILITARY?  As he was fired he stated that he and his family were threatened if he went public. Further, my primary military source states that DHS will be in control of the American military when the Ebola crisis begins.

In the upcoming martial law scenario, the use of foreign, UN troops will be employed. The ground work for this development has already taken place. 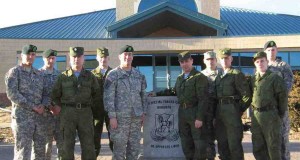 The extra-constitutional “agreements”(that means illegal agreements) were inked in Washington, D.C., at the fourth annual meeting of the illegally created “U.S.-Russia Bilateral Presidential Commission Working Group on Emergency Situations.” This extra-governmental organization, formed under the Obama administration, is one of almost two dozen similar “working groups” bringing together top U.S. and Russian officials. These two bodies are cooperating on everything from the drug war and agriculture to terror, science, “rule of law” (could that be code for martial law?), health, environment, energy, nuclear issues, education, culture, media, business, arms control, and more, according to the U.S. State Department. The Senate has not ratified any of the international deals, as required by the Constitution of the United States. And as such, this is an illegal agreement. However, this is not just an illegal agreement, IT CONSTITUTES TREASON AGAINST THE AMERICAN PEOPLE.

The agreement calls for Russian troops to engage in policing activities at American public events on American soil which has already taken place in Colorado Springs, CO.

An occupation force is being mobilized.

Also, in early June of 2014, I wrote an article which exposed the presence of UN military vehicle sightings around the United States. The appearance of these vehicles is no coincidence. It is my contention, and the collective belief of my military sources, that the UN (e.g. Russian soldiers) will be used to counter any dissident American military response.

You may also recall that I both written on, and broadcasted about, the use of local law enforcement to use DUI type of roadblocks to enforce the mandatory vaccinations back in the H1N1 scare of 2009.  Former Kansas State trooper, Greg Evensen, stated the same on my talk show. This was apparently a beta test for what is coming in 2014-2015.

On September 9, 2014, I wrote an article entitled The Psychological Reasons Why American Soldiers Would Fire On American Citizens. The article reviewed three landmark studies, Solomon Asch,Stanley Milgram‘s Obedience study  and  Phillip Zimbardo’s Stanford University Prison Study, which demonstrated that with minimally applied pressure, about  two-thirds of all Americans would put someone to death because an “authority figure” told them to do so.  When it comes to enforcing the quarantine zones, coupled with dealing with political dissidents, about 65 to 70% of American soldiers will likely fire on American citizens when told to do so. However, this also means that 30-35% of American soldiers, National Guard and police will not do so. Certainly, the presence of the blue-helmeted UN occupation forces (e.g.  Russians) will likely enhance the resistance in the American military to the rollout of brutal martial law.  I think it is likely that mandatory enforcement of an Ebola vaccine could trigger a civil war with dissident military forces leading the way. This is why I believe that we have Russian troops training on our soil.  Is the starting of a civil war the real goal of the Obama administration?

These scenes, depicted below, will soon be common place in the United States after the introduction of Ebola and the quarantining of segments of the population. When healthy people are quarantined, they are effectively sentenced to death because it is merely a matter of time until the virus reaches them.

The following video shows the resulting Ebola quarantine chaos as police fire on desperate crowds in the sealed-off Liberian capital zone. Do you think that Americans, armed with guns are going to accept the death sentence of a quarantine zone, or, are they going to try and fight their way out?

This certainly does explain the use of foreign troops who will not hesitate to fire upon American citizens and resistant American soldiers. All of my military sources believe that a military led uprising is the only way to avoid the decent into martial law once the crackdown happens. The trigger event will be mandatory vaccinations coupled with the quarantining of segments of the population.