A former colleague of President Obama’s, who worked with him at the University of Chicago, claims that Perfesser Obama once told him, “I don’t believe people should be able to own guns.”  (See here.)

These are the words of John Lott, Jr. in his new book, At The Brink.

Lott – a tireless defender of self-ownership – which he clearly understands is rendered moot when people are denied the right to defend themselves – met Obama shortly after finishing up the research that would find expression in his seminal work, More Guns, Less Crime. In this famous book, Lott established that the safest places to be – statistically, in terms of one’s odds of becoming the victim of a criminal wielding a gun – are places where citizens’ right to possess guns for self-defense has not been rescinded. And, conversely, that the least safe places – the places where a citizen is most likely to become a victim of “gun violence” – are areas where citizens have been rendered defenseless against criminals wielding guns.

Barry knows this too, of course. It is why you literally could not swing a dead cat in the orbit of the Dear Leader without striking a man with a gun. But these men (and some women, too) are not the “people” Barry doesn’t think “should be able to own a gun.”

“People” is synonymous in the mind of this creep with us – the lowing masses (as he regards us).

We should not be allowed to own guns.

“People” never means people vested with state power. They can be trusted. 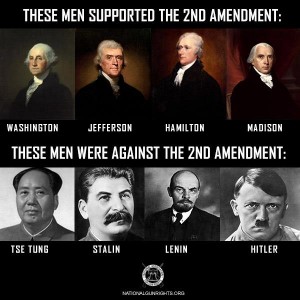 They have special rights. Such as the “right” of badged people – you know, cops – to carry guns almost anywhere, anytime – in bars and restaurants where alcohol is served,  for example – even when not “on duty” and not wearing their sacred costumes. In “gun free” zones. In DC, Chicago. New York City.

We of course are not possessed of  these special rights. Or of any rights at all, for that matter. At least no rights they are bound to respect.

That is the opinion of Barry Obama – who lives in the Emerald City, where he and his are armed to the proverbial teeth with automatic-fire machine guns (and much more) but no mere plebe may possess so much as an ancient Derringer. To merely walk within the near-orbit of Obama’s home and be found in possession of such is to risk a lifetime in prison – or summary execution. But our homes – and ourselves – are unworthy of being defended. Indeed, we must be rendered defense-less. At their mercy.

That is the whole point, you see.

NYC Caudillo Michael Bloomberg is of the same opinion. Here is a video of one of us – the subhumans unworthy of self-ownership and thus, the right to defend ourselves – inquiring of Bloomberg why it is – if guns are bad and must be banned – he is surrounded by men with guns?

The journalist – Jason Mattera – asks: “In the spirit of gun control, will you disarm your entire security team?” Bloomberg’s armed thugs immediately form a cordon and loom menacingly. Bloomberg sneers, “I’ll get back to you on that” as he slinks backward into his armored limousine. 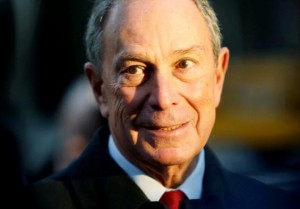 The arrogance, the contempt for us cattle is palpable – radiating off the reptilian skin of this creature like a malignant aura.

And that is the key thing to take away from all this. They despise us.

And, they fear us.

Which is why they wish so fervently to disarmus.

It is not about guns. Obama, Bloomberg, Feinstein – all of them – love guns. Their guns.

It is about control. Of us.

“Gun control” – as they style it – is merely an expression of Lenin’s pithy description of government as being all about Who Does What to Whom.

About what they intend to do to us.

Lenin –  and Obama and Bloomberg and Feinstein – apparently never read Frederic Bastiat, who vaporized their pretensions with a handful of well-chosen words:

“If the natural tendencies of mankind are so bad that it is not safe to permit people to be free, how is it that the tendencies of these organizers are always good? Do not the legislators and their appointed agents also belong to the human race? Or do they believe that they themselves are made of a finer clay than the rest of mankind? ”

Yes, Barry and Michael and Diane do, indeed believe that they themselves are made of a finer clay than the rest of mankind.

If they did not so believe – if they really did believe in their nostrums – that “people” should not able to own guns, then they would include themselves in that number. But of course, they do not. Because they are  not “people.” That’s us. They are special people – better people than we are. Wiser, smarter. Competent to possess arms – entitled to possess arms. To special rights – including the right to defend themselves. 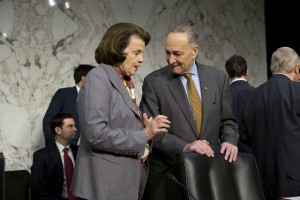 Our selves don’t matter to them – other than asthings for them to order about, control, regiment and dominate.

We are as cattle to them. We don’t have rights. How can cattle have rights?

Their law for us is simple: Do as we order. Submit. Obey.

It is why they cannot abide our having guns – while at the same time, knowing they must possess the only guns.