Since they are new at this, apparently they’re not very good at covering their tracks, because Republican Representative Steve Stockman of Texas has identified a flurry of tweets against the 2nd Amendment as fraudulent. The accounts sending the tweets have been traced back to computer generated spambots. The accounts have not interacted with other accounts and two of them follow only one person, Obama’s former digital strategist, Brad Schenck.

According to Stockman, he received 16 tweets after Obama’s call for people to tweet their congressmen in support of strict gun control laws…and ten of those were fake.

“Obama’s anti-gun campaign is a fraud,” Stockman said. “Obama’s supporters are panicking and willing to do anything to create the appearance of popular support, even if it means trying to defraud Congress,” he added. “I call upon the president to denounce this phony spam campaign.” (source)

So, all the stuff we keep hearing from the mainstream media about most of the population being pro-gun control? Just another deceitful illusion brought to you by the “fine” folks at the Obama administration. The person portraying himself as an upstanding citizen concerned about guns is most likely some pimple faced guy in a hooding, typing feverishly at his laptop in his mother’s basement.

Two days after his inauguration, the President launched his “Cyber-Warriors for Obama Project”, geared towards manipulating public opinion through social media. Douglas Hagmann interviewed a DHS insider, who brought to light the plan:

“…One section with the word “targets” had a list of religious web sites, web sites I recognized as Christian. Another section was a listing of conservative Internet sites. There was another tab with the label “problem sites” that seemed quite extensive. I looked at that section, and it was broken down further into “birther” sites, “pro-gun” sites, “anti-abortion” sites, just to name a few.

There was also a section of the usual news sites, like CNN, ABC, you know. Numerous e-mail addresses were conspicuous under each news organization, which also included Fox…

The first page of the binder had bullet points labeled “objectives” and instructions for the cyber-assets. There was also a very detailed non-disclosure agreement with the word “DRAFT” typed in big, light grey letters across the body of the two-page agreement. The agreement and the instructions were typed on white paper with a warning, printed in red on each page, that the document was not to be copied or disseminated.

The instructions seemed very specific. Infiltrate web forums, collect screen names, avatars, and posters’ tag lines, and attempt to resolve these to their actual identities. I read one paragraph that listed circumstances when the “asset” was only to monitor but do not disrupt without authorization. There was another section titled “Divert, Disrupt and Destroy,” listing “how to’s” in certain cases.

There was also a section on maintaining a social media presence, and another on the most effective use of Twitter.

Lastly, there was a “reference section,” which included statistics, specific language to use to marginalize different posters, and effective methods to discredit people while maintaining a sense of legitimacy.”

The chilling thing about all this?

There are 3575 people being employed by the Obama administration to dispense disinformation and sow discord in the Patriot movement. They have been taught how to create “personalities” and infiltrate groups as officers of distraction. If you are active in forums, on social media such as Facebook, or as a commenter on alternative news sites, you’ve most likely seen a recent uptick in trollery.

It’s just another day at the office for a cyber warrior.  The Reich Ministry of Public Enlightenment and Propaganda has nothing on Obama’s Cyber Warriors. 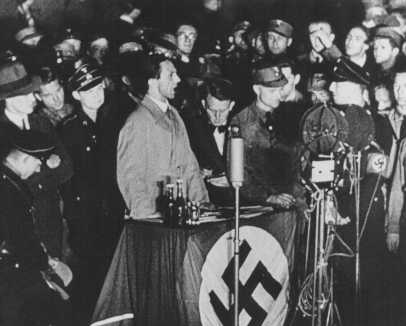