Once upon a time, a system was designed in which “the people” elected delegates to go to Washington DC. These members of Congress had the specific duty of representing the wishes of their constituencies when laws were being voted upon.

The success of last weekend’s March Against Monsanto should have made it very clear that a great many people wish to see, at the very least, labels on toxic GMO foods. The fact that this success was covered up by the media does NOT mean that the members of Congress were unaware of it – just the opposite. Our success was frightening, and that is why it was covered up.

Despite that, the day before the event, an amendment to the farm bill that would have allowed the individual states to pass laws protecting consumers from unlabeled GMOs was quietly shot down in the Senate with a vote of 71-27 against this right. The timing of this betrayal, right before a long weekend, goes along with the general modus operandi of sliding through things that will meet with objections from the public when they are otherwise distracted. 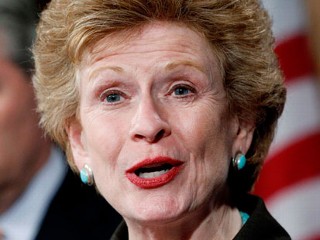 The failure to pass this amendment was due in part to Monsanto mouthpiece Sen. Debbie Stabenow (D-Mich.), the chair of the Agriculture Committee. Stabenow, incidentally, received over three quarters of a million dollars from agribusiness interests ($739,926 to be exact) in agribusiness donations. Stabenow utilized the propaganda that is being dispersed by the likes of Monsanto and the Gates Foundation to argue her point:

Sen. Debbie Stabenow (D-Mich.), the chair of the Agriculture Committee, spoke on behalf of the biotech giant seizing the opportunity to focus primarily on the myth that genetically modified ingredients feed the hungry people of the world, ignoring the fact that 64 countries now require GMO labeling.

“This particular amendment would interfere with the FDA’s science-based process to determine what food labeling is necessary for consumers,” Stabenow said.

“It’s also important to note that around the world now we are seeing genetically modified crops that have the ability to resist crop diseases and improve nutritional content and survive drought conditions in many developing countries,” she added.

Unable to make the connection with how allowing states to label GMO foods would interfere with corporate biotech operations abroad, she instead took the opportunity to show that the chair of the Agriculture Committee is marching lockstep with the Gates Foundation.

“We see wonderful work being done by foundations like the Gates Foundation and others, that are using new techniques to be able to feed hungry people,” she said. (Source)

This puts Stabenow right up there on the list with Senator Roy Blunt (R- Mo), the inextricably-linked congressman from Monsanto’s home state of Missouri who slipped the rider in for the Monsanto Protection Act last March. But Stabenow and Blunt are not the only enemies. Monsanto is the number one donor in the agricultural lobby, having spent nearly 6 million dollars in 2012, ($5,970,000) as well as more than $925,000 directly to political candidates. ($541,854 as Monsanto, $384,890 as Scott’s Miracle Gro, which is an agent for Monsanto’s “Round-up”. ) Any politician who took money from them and then voted in favor of them is equally guilty of betraying their offices and the trust placed in them by voters.

There is simply no excuse for voting against the individual state’s rights to allow consumers to make informed choices about the food they purchase. The sponsor of the failed bill, Senator Bernie Sanders (I-Vt) of Vermont, said:

“…the concept we’re talking about today is a fairly commonsense and non-radical idea.

“All over the world, in the European Union, in many other countries around the world, dozens and dozens of countries, people are able to look at the food that they are buying and determine through labeling whether or not that product contains genetically modified organisms.”

Sanders also noted that in the past he has helped pass laws in his home state of Vermont that would require GMO labeling but hasn’t seen those laws actually be enacted over fears that Monsanto would sue the state. This bill would allow states to do what they want without fear that the company that brought us agent orange could end up having more power than an entire state government. (Source)

The saying goes, “The friend of my enemy is also my enemy.” By this rationale, those who are in the back pocket of Monsanto are the enemies of those of us who demand proper oversight of the evil corporation through the checks and balances that are SUPPOSED to be in place to protect consumers. Therefore, it is patently clear that those in Congress who vote in favor of Monsanto are the enemy.

Let’s out the politicians who voted against the amendment last Friday that would have allowed the states to choose whether or not GMOs should be labeled. As long as these politicians are in office, GMOs will NOT be labeled at a national level, because these politicians will not allow legislations to pass that might harm the bottom line of their puppet-master, Monsanto. Real Farmacy put together a list of the US Senators who voted AGAINST our right to know what we are eating:

Despite the vast campaign donations the politicians receive from special interest groups, the recent grassroots movements like Occupy Monsanto and March Against Monsanto have proven that activism works without the huge budget. Even though Monsanto has a kennel full of obedient pet congress members, we can defeat the biotech enemy by spreading information. Teaching the public about the dangers of consuming GMOs, the environmental and health tolls of Monsanto’s farming methods, and the unscrupulous business practices that are designed to put small farmers around the globe out of business, is our most powerful weapon.

This is a call to action. Use the list above to make it clear that we will not stand idly by while our elected representatives betray us for the benefit of Monsanto.