Mark Hamill, the star of Star Wars, walked around San Diego Comic-Con on Sunday dressed as “Orange Vader.” The character he created for the event combined features of Donald Trump and the infamous Star Wars villain, Darth Vader.

And it was pretty funny regardless of the fact that it was done to mock the president. It’s also likely to upset those on the more right end of the political spectrum, as the back of his costume, which emulated Trump’s style compared America to the Death Star, according to The Daily Mail.

On the back of Hamill’s white T-shirt were the words, “Make the Death Star Great Again.” 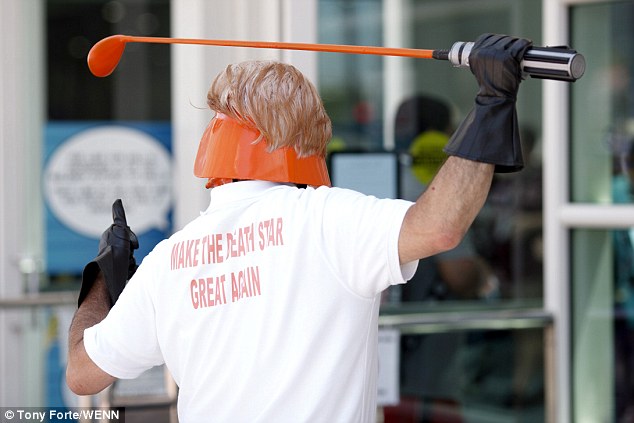 Let’s be honest, the golf club/lightsaber was a nice touch too. Hamill spent the majority Comic-Conic Con in his unique costume, imploring fans on his social media to try and find him and take a picture. Using the hashtags #DarthDonald and #OrangeVader to promote his final look at the convention, the Joker voice actor joked with his followers about the outfit.

When one fan asked in shock if he had really taken his picture, Mark quoted Han Solo in Star Wars: The Force Awakens and said: “It’s true… ALL of it.”

Hamill has often taken to social media to criticize Donald Trump and his policies.

Contributed by The Daily Sheeple of www.TheDailySheeple.com.