Oil is the driving force of the Libya economy. Oil and gas production account for 65 percent of the country’s GDP, 96 percent of exports, and 98 percent of government revenues. As such, developments in the oil sector directly affect the overall economy and show up almost immediately in the growth of real GDP. Libya’s turbulent political transition to democracy has sent oil production on a rollercoaster ride—and taken its economy along with it. In the coming year, Libya’s transition will depend on whether a political agreement can be reached between the government and militia leaders to avoid an economic collapse.

The dominance of oil in the Libyan economy became painfully evident after the uprising that overthrew the Qaddafi regime in 2011. The ensuing civil war disrupted production facilities and pipelines, causing a dramatic fall in oil production from an average of 1.7 million barrels per day (mbd) in 2010 to less than 0.5 mbd in 2011. This resulted in the total collapse of the economy. Real GDP dropped by 62 percent, and because of the dependency of the rest of the economy on the oil sector, non-oil real GDP also declined by 52 percent.

In the space of one year, nominal GDP was more than halved from $75 billion in 2010 to $35 billion.  To the surprise of many observers, the economy bounced back in 2012 as oil production recovered much faster than had been expected, reaching a near pre-uprising level of 1.4 mbd. Overall real GDP jumped by over 100 percent in 2012, with non-oil real GDP growing by 44 percent. Nominal GDP in the year reached $81 billion, some 8 percent above the 2010 level. It is clear from this episode that as long as oil production and prices remain at their current levels, the Libyan economy would experience growth similar to, or above, the rates seen during the Qaddafi regime. The economy seemed to be making a strong comeback. 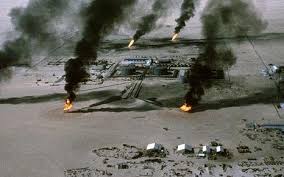 The optimism was unfortunately dashed in early 2013 as militias and labor groups targeted oil facilities as a way to achieve their political and economic demands. What began as a series of sporadic labor strikes for higher wages in the oil industry soon spread throughout the eastern half of the country which has the majority of the oil reserves. Furthermore, the militias and labor groups took over a number of key oil terminals on the coast so that exports were cut. And to make matters worse, by the end of 2013 separatists in the eastern region declared their “independence” and formed an autonomous government, known as the Cyrenaica political bureau.

They seized government-controlled oil fields and announced the creation of their own oil company to export crude oil.  Oil production steadily declined from 1.4 mbd at the beginning of 2013 to only 0.3 mbd by the end of the year. Real GDP, which was projected to grow by over 5 percent during the year, in fact fell. Export revenues were hard hit too. In the first half of 2013 the country earned $27 billion from exports, but in the second half this went down to $13 billion. By the end of the year, after six months of port closures, the few terminals still under government control were exporting a mere 110,000 barrels a day, which was even lower than what the country had been exporting when the civil war was raging in 2011. With oil production and exports down sharply, the growth rate of the economy naturally turned negative in 2013.

Estimates of the International Monetary Fund (IMF) and the World Bank indicate that real GDP fell by 5-6 percent during the year. The main reason that it did not fall more was that, unlike in 2011, the government maintained its expenditures using international reserves held in the Central Bank of Libya (CBL)—which at the end of 2012 stood at $120 billion—and the foreign assets of the Libyan Investment Authority (LIA). This type of financing of government’s expenditures was not possible in 2011 because of the UN-imposed freeze on Libyan foreign assets. 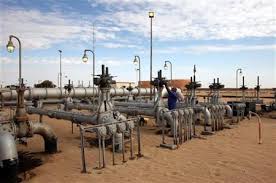 In 2013, the transitional government passed a $57 billion budget, representing an increase of 14 percent compared to the previous year. It is noteworthy that in 2013 government spending reached 70 percent of GDP—the highest it’s ever been in Libya and the highest among all the oil producers in the Middle East and North Africa (MENA) region. With revenues amounting to only $40 billion, the government had no choice but to use its international reserves to plug the fiscal deficit. It is reported that starting in the summer of 2013 the CBL was losing $7 billion a month of its foreign exchange reserves.

Economics will not determine which of these two scenarios will come to pass in 2014, politics will. If the national dialogue that is currently underway leads to a political settlement and a national unity government is formed, there is some hope that the economic collapse can be avoided as oil starts flowing again. But as long as oil production, which is the lifeblood of the Libyan economy, is held to ransom to achieve political gains, the odds of an economic collapse remain high. Even if a complete economic collapse is averted by additional government spending, it is quite certain that the economy will be in relatively poor shape in 2014.

This will leave the next government the major task of reviving the economy and transforming it into one where the private sector plays a leading role rather than the government. The longer a political settlement is delayed, the more difficult it will be for the next government to do this and put Libya on a sustainable high-growth path that creates sufficient jobs for its young and expanding labor force. Failure to get the economy right will lead to more instability and more uprisings.

Contributed by Contributing Author of ISN.