You can’t help but wonder about this one. Why would three Arab countries publicly warn their citizens to get out of Lebanon when these types of events have gone on for years?

Yeah, the Syria factor is big, but this smells fishy to me.

One reason for the alert is that the major Gulf Arab states are almost all in on the whole staged plan. Whatever they’ve been promised for cooperating with the US, NATO and Israeli plans, you can be sure big time blackmail and strong arming is involved. Wish they’d wise up, because it will end in total betrayal anyway. That’s OK though if it takes out this wicked house of Saud and all their bought off minions.

Whatever we conjecture, this announced “spillover”, no doubt staged, is a clear signal.

You couldn’t have a more strategic move than taking Lebanon. Israeli (and NATO) military would be perfectly placed for an attack on Syria. With both of those nations neutralized, the Iran war is just a (nuclear) stone’s throw away.

Here’s the article from BBC News: 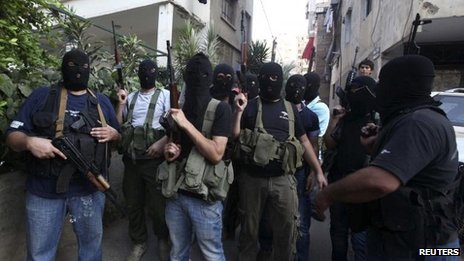 ‘Three Arab states have urged their citizens to leave Lebanon amid signs that the conflict in Syria is spilling over into its western neighbour.

Saudi Arabia, the United Arab Emirates (UAE) and Qatar urged immediate action after a string of kidnappings of Sunni Muslims by a powerful Shia clan.

They were retaliating for the abduction of a clan member by rebels in Damascus.

The rebels say the man was fighting for the Syrian government on behalf of Lebanon’s Shia Hezbollah movement.

That claim has been denied by his family.”  Source

Like the plain as day announcements by the CFR, Rockefeller Foundation, PNAC and a host of insider think tanks and foundations, this march into the Middle East and how it would be carried out has been long foretold. One very telling document that talks specifically about how to encircle and take out Syria using Lebanon is a study published in Israel entitled A Clean Break: A New Strategy for Securing the Realm.

Interestingly enough, the Think Tank that came up with this “Clean Break” Report as it became known, is the following:

“The Institute for Advanced Strategic and Political Studies (IASPS) is an Israel-based think tank with an affiliated office in Washington, D.C. It was founded in 1984 by its president, Professor Robert Loewenberg.[1] According to the institute its mission is “to call attention to the Redirection of Western peoples by Science & the Open Society-History: Policy in the Era of the Convergence of Western Elites and Islam.”

And head of this Israeli based “think tank A Clean Break: A New Strategy for Securing the Realm (commonly known as the “Clean Break” report) is a policy document that was prepared in 1996 by a study group led by Richard Perle for Benjamin Netanyahu, the then Prime Minister of Israel.[1] The report explained a new approach to solving Israel’s security problems in the Middle East with an emphasis on “Western values”. It has since been criticized for advocating an aggressive new policy including the removal of Saddam Hussein from power in Iraq.

According to the report’s preamble,[1] it was written by the Study Group on a New Israeli Strategy Toward 2000, which was a part of theInstitute for Advanced Strategic and Political Studies. Former United States Assistant Secretary of Defense Richard Perle was the “Study Group Leader”, but the final report included ideas from James Colbert, Charles Fairbanks, Jr., Robert Loewenberg, Douglas Feith, David Wurmser, and Meyrav Wurmser.” (Wikipedia)

So let’s get this straight. The sitting US Assistant Secretary of Defense is the head of an Israeli based think tank which comes up with an “aggressive new policy” to protect and expand Israel in the Middle East that just happens to get adopted and followed? With the US paying the bills in lives and money?

Look up the PNAC report and you’ll find almost the same names and same recommendations, some even saying it’s a later edition of the same report.

Of course you do. You and dozens of others in power are Israelis. Not very subtle, Wolfy boy and co.  The world is on to your ilk.

More on the “Clean Break” Report

“The encirclement of Syria and Lebanon has long been in the works. Since 2001, Washington and NATO have started the process of cordoning off Lebanon and Syria. The permanent NATO presence in the Eastern Mediterranean and the Syrian Accountability Act are part of this initiative. It appears that this roadmap is based on a 1996 Israeli document aimed at controlling Syria. The document’s name is A Clean Break: A New Strategy for Securing the Realm.

The 1996 Israeli document, which included prominent U.S. policy figures as authors, calls for “rolling back Syria” in 2000 or afterward. The roadmap outlines pushing the Syrians out of Lebanon, diverting the attention of Damascus by using an anti-Syrian opposition in Lebanon, and then destabilizing Syria with the help of both Jordan and Turkey. This has all respectively occurred from 2005 to 2011. This is also why the anti-Syrian March 14 Alliance and the Special Tribunal for Lebanon (STL) were created in Lebanon.

As a first step towards all this the 1996 document even calls for the removal of President Saddam Hussein from power in Baghdad and even alludes to the balkanization of Iraq and forging a strategic regional alliance against Damascus that includes a Sunni Muslim Arab “Central Iraq.” The sectarian nature of this project is very obvious as are its ties to opposing a so-called “Shiite Crescent.” The roadmap seeks to foment sectarian divisions as a means of conquering Syria and creating a Shiite-Sunni rift that will oppose Iran and keep the Arab monarchs in power.” Source

Just Lining up their Ducks

Apparently the “Clean Break” report, meaning a clean break from slow, past policies into an aggressive hegemonist mode, predates the very similar PNAC report which now appears to be a “signing on” to the program by a larger group of Neocons, which no doubt made its way into the various power factions for their imprimatur and marching orders.

Specifically, approving the carrying out of the 9/11 “New Pearl Harbor” atrocities to get the ball rolling.

Nice to know, I guess. The end result is the same. A bunch of scum sucking arrogant power mad bastards playing chess with the lives of humanity.

Know them by their fruits.

Anyway, the Lebanon phase is apparently now about to get underway in earnest.  I’d be surprised otherwise with all the West is throwing at their planted “insurgents” in Syria and how Lebanon would so strategically figure into their plans. What hellish bastards these people are, playing with lives like it’s a game.

Lies eventually fold and implode, just like their own disappearing, pulverized twin Masonic towers on 9/11.

But know this: Our realization of what’s happening can precipitate their deserved demise even faster.

Keep liberating. Everything we do, or don’t do matters.

No pressure..;).. Just be free and it all follows!