When we think of killer robots we often think of them  having a somewhat humanoid form. Super sized and with super strength prowling the streets, replacing the human law enforcement contingent that currently stalk our neighborhoods.

This miniature tank, only one metre long and made by Qinetiq North America, is one of a host of unmanned air, sea and land vehicles that are being used by militaries across the globe.

More than 90 countries now operate such systems, and it is an industry which will be worth $98bn (£58bn) between 2014-23, says research company IHS.

Kitted out with either a grenade launcher or a machine gun, the firm’s latest version MAARS – Modular Advanced Armed Robotic System – is certainly lethal, but independent it is not.

It relies on a soldier controlling it remotely, and only operates up to distances of about 800m (2,600ft).

However, many critics worry that marrying advances like these in robotics and miniaturisation, with developments in artificial intelligence (AI) could lead, if not to the Terminator, then perhaps to its crude precursor.

Others argue that such AI developments would take many decades, and that for the foreseeable future there will need to be a “human in the loop”, overseeing such systems.

Israel’s Harpy drone, makes its own decisions about attacking. Currently it is set to attack only enemy radar but the technology is already installed that could expand its scope of operations. 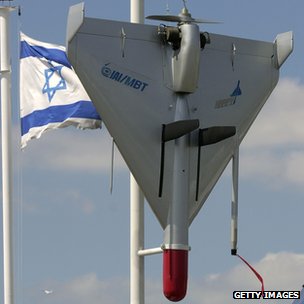 This is what its manufacturers, IAI, call a “fire and forget” autonomous weapon – or a “loitering munition” in military jargon.

Once launched from a vehicle behind the battle zone, Harpy – effectively a guided missile with wings – loiters over an area until it finds a suitable target, in this case enemy radars.

Crucially, once a radar is detected it is the drone itself that decides whether or not to attack.

True, Harpy is only launched if its operators suspect there will be enemy radars to be attacked, but automation like this is likely to become more common.

Yet the real obstacle to the more widespread use of what some call “killer robots” is getting them to tell friend from foe.

This problem is not deterring the Defence department.  The US defence department’s own 25-year plan published last year, says that “unmanned systems continue to hold much promise for the war-fighting tasks ahead”.

It concludes by saying that once technical challenges are overcome, “advances in capability can be readily achieved… well beyond what is achievable today”.

Contributed by Chris Carrington of The Daily Sheeple.

Chris Carrington is a writer, researcher and lecturer with a background in science, technology and environmental studies. Chris is an editor for The Daily Sheeple. Wake the flock up!

Chris Carrington is a writer, researcher and lecturer with a background in science, technology and environmental studies. Chris is an editor for The Daily Sheeple. Wake the flock up!