Philanthro-crony-capitalist corruption in the U.S. has reached levels that put Lower Slobovia to shame.

Granted, the fantasy of philanthrocapitalism is appealing: take a bunch of fabulously successful entrepreneurial billionaires, grant their foundations tax-free status, and then unleash them on the world as philanthropists who will solve problems by applying the incentives of capitalism.

Since we know Lower Slobovia is corrupt, we know how this goes. Dictators, corporations, cartels, etc. who need favors from Lower Slobovia make huge “donations” to the Paytoplay Foundation, and like magic, their favors are granted by the government of Lower Slobovia.

Sadly, there is no corrupt Lower Slobovia or corrupt Paytoplay Foundation. There is however a corrupt USA and corrupt Clinton Foundation, which you can read about here: Putting the Clinton Foundation in Context: Corruption Plain on the Face of It (Amy Sterling Casil)

“I am not only qualified to assess the Clinton Foundation, I am also in a position that enables me to do so without fear of harming people in need. Any nonprofit professional in the U.S. can look at the Foundation’s own statements, tax filings and financial reports and see there is something wrong. No one who works for a nonprofit right now should do so because of the Clinton penchant for revenge and clear signs there are problems in tax and law enforcement that could lead to harm of their organization or clients. Ethically, they ought not comment because they will put their organizations or those they are charged to serve at-risk.

Since I don’t work in the nonprofit field any longer and know I will never be able to return to it, I am free to write these articles. There are only two things I can identify at which the Clinton Foundation excels: putting cash in the bank and spending it.

As a side note, my organization was contacted regarding building actual housing in Haiti after the 2010 earthquake. We had only a few meetings before being told “don’t bother, the Clinton Foundation will be leading the efforts.” This effort ended up being about 20 moldy, substandard trailers laced with formaldehyde, provided by the same company that also constructed substandard, poisonous emergency housing after Hurricane Katrina. You will read articles to this day in major publications that blame Haitians. The company that did this to our country in New Orleans, and to Haiti, is owned by Berkshire Hathaway/Warren Buffett.” 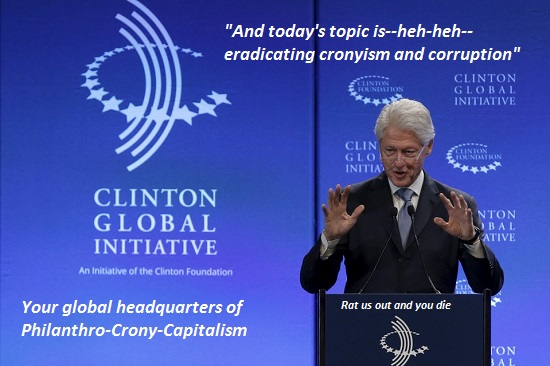 It’s time we crush the putrid roach motels of philanthro-crony-capitalism, Starting with the Clinton Foundation. But don’t stop there–crush them all, from the Trump Foundation to the Ford Foundation and all the way down the line.

Here’s an idea: you make money, you pay the taxes on that income, and you do what you want with the remaining dough, just like any other citizen–no tax breaks for self-serving Crony Philanthropy:

Here’s another idea: you want to establish a charity or foundation? Fine, but the books are completely transparent 24/7 on the web, or your corrupt philanthro-crony-capitalist fraud is shut down. Every donation, every expense, every paycheck, every travel voucher–every one, posted on the web for all to see. If the foundation is caught keeping anything secret that should have been transparent, you go to jail–yeah, you, the founder.