For most Americans the crisis is over. For the people of Syria, war rages on and the fight for survival continues.

According to The Daily Mail, over 120,000 people are without food, water, medicine and essential services in Syria’s capital city of Damascus. Many are starving to death. Humanitarian aid has been slow to come amid complications with Syrian leadership, continued fighting in the country and the sheer size of the population requiring assistance.

This is what it looks like when a country’s entire infrastructure is completely destroyed and its safety nets fall apart.

People searching for resources as far as the eye can see… 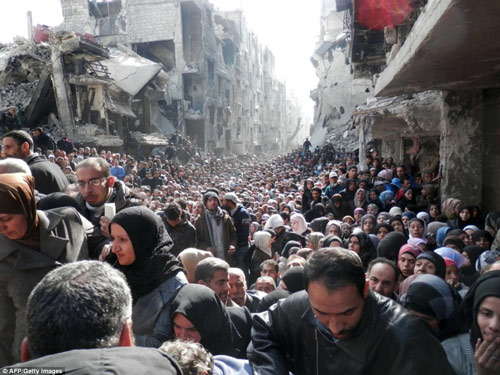 (Pictured: Tens of thousands of people gather on a bombed-out street in the hopes of finding food)

Hundreds of men, women and children fight to get to the front of the queue as a refugee camp in Damascus receives food parcels after being cut off for months.

Today the United Nations Relief and Works Agency (UNRWA) called on rebel forces and Al-Assad’s troops alike to allow ‘safe and unhindered humanitarian access’ to thousands of civilians in Yarmouk, a Palestinian district in the Syrian capital.

Yarmouk has seen some of the worst fighting in the capital, leading to severe food shortages and widespread hunger.

‘The images are at once epic and personal. Row upon row of gaunt faces, serried ranks of grimy, raged figures; the delicate, hunger-ravaged features of children waiting in line for an UNRWA food parcel; the face of a mother creased in grief for a deceased child; tears of joy as a father is reunited with a long-lost daughter.

‘These are the vignettes of inhumanity that have become the regular fare of nightly news bulletins. They are UNRWA’s daily reality.’

Video: “The Devastation is Unbelievable”

The people coming from within Yarmouk appear suddenly near this distribution point. It’s like the appearance of ghosts.

These are people that have been trapped in a situation not only without food, medicines, clean water, all the basics… but also probably completely subjected to fear because there was fierce fighting going all along.

The devastation is unbelievable.

We’ve often discussed what James Rawles refers to as the golden horde – a mass gathering and/or exodus of people searching for resources in the aftermath of a mega-disaster.

The people of Syria have seen everything from supply lines to utility access completely cut. Some have lost their homes as a result of bombings.

While we certainly can’t prepare contingency plans for every possible scenario, a well developed preparedness plan can go a long way. It should include everything from supply stockpiling and self defense, to evacuation plans and secondary living arrangements.

As we’ve seen with disasters here in the United States, within 72 hours of an emergency event the majority of people will run out of food. The Federal Emergency Management Agency is often overwhelmed in limited-scope disasters like hurricanes. Can you imagine the severity of the crisis if it was a region- or nation-wide collapse of infrastructure?

It would be absolutely horrific for the non-prepper.