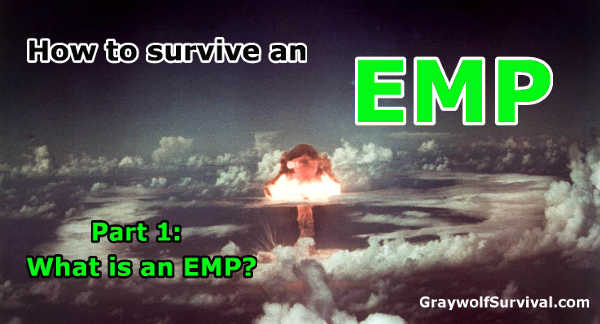 This seems to be a prepper’s favorite “Doomsday scenario”. Many books have been written about it:

Youtube has hundreds of videos on the subject. The internet is filled with web pages telling you want you should or should not do in case of one.

But how much do you really know about one? How much does anyone know?

In this Part 1 of the ‘How to survive an EMP attack‘ series, I will attempt to explain what an EMP is. I’ll tell you what we know about them, and more importantly, what we DON’T know,  how a nuclear EMP is different than a solar or CME (coronal mass ejection) EMP, and try to dispel some myths surrounding them.

According to Wikipedia, an EMP is:

also sometimes called a transient electromagnetic disturbance, is a short burst of electromagnetic energy. Such a pulse may occur in the form of a radiated electric or magnetic field or conducted electrical current depending on the source, and may be natural or man-made. The term “electromagnetic pulse” is commonly abbreviated to the acronym EMP (which is pronounced by saying the letters separately, “E-M-P”).

In layman’s terms, it is an intense burst of electromagnetic energy caused by an abrupt and rapid acceleration of charged particles. This can cause all kinds of problems with electronic equpiment and devices. In some cases, it can even cause physical damage to things such as buildings, airplanes, power lines, etc.

There are three things that we know cause EMPs: a bolt of lightning, a nuclear explosion (or EMP type weapon), and solar storms.

I’m hoping everyone is familiar with lightning. A lightning strike produces a surge in electric current in nearby wires and cables. This surge of electricity can damage your electronics that you may have plugged into the wall sockets of your home. That is the reason it is highly recommended that you have your computer, TVs, etc. hooked up through a surge protector.

EMPs by high altitude detonation or CMEs are caused by the release of charged particles within the Earth’s ionosphere. The ionosphere is the shell of electrons and electrically charged particles surrounding Earth. This “shell” is found from about 30 miles to 500 miles above the Earth. The size of the ionosphere can fluctuate some based on varying factors I won’t get into here.

Anyway, a huge downward surge in particles in the ionosphere would create massive electrical currents which could “short out” all sorts of electrical power grids, transformers, and other equipment dependent on electricity.

EMPs have happened before and will happen again

The Earth has experienced EMPs before. The four that will I mention here (2 from CME and 2 from nuclear detonation) are usually the most referenced.

The first is the Carrington Event of 1859, which was the first documented event of a solar flare impacting Earth. The event occurred at 11:18 a.m. EDT on Sept., 1 and is named after Richard Carrington

, the solar astronomer who witnessed the event through his telescope.

The second event is the Star Fish Prime tests. In 1962, the US government launched a 1.4 megaton nuclear warhead about 250 miles into the atmosphere over the Pacific Ocean. The pulse results were much stronger than expected. It damaged street lights and microwave links in Hawaii, 900 miles away. The EMP was so intense that it was not accurately measured because “it drove much of the instrumentation off scale”.

Here’s a long video on Star Fish Prime from the archives:

The third event was a Soviet EMP test called “Test 184”. It happened around the same time as the Star Fish Prime tests. Not many details have been released from this. Although the warhead was not as powerful as the one from Star Fish Prime, it was exploded about 180 miles over the populated area of Kazakhstan.

What is known is that the EMP from Test 184 knocked out a 600-mile underground power line (shielded) that was buried 3 feet underground. It caused fires to the power station that the line was connected to. It also damaged diesel generators. (Most of the details have not been released and/or have remained classified.)

For the record, the nuclear warheads used in both above mentioned tests were not designed for EMP-related events. Hence the results from both would be considered highly ineffective today.

The final event I’ll mention here is a CME that hit Canada on March 13, 1989. A powerful solar flare set off a major power blackout that left six million people without electricity for about nine hours.

According to NASA, the CME disrupted electric power transmission from the Hydro Québec generating station and even melted some power transformers in New Jersey. NASA scientists have concluded that this event was only about a 1/3 the strength of the Carrington event.

The types of EMP pulse

Scientists from the International Electrotechnical Commission (IEC) have classified EMPs into 3 categories. 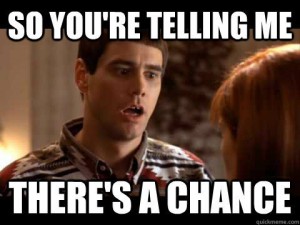 The other main difference between a nuclear EMP and a solar EMP, is that while a nuclear EMP may never happen, it is only a matter of time until a solar EMP does hit Earth. The Sun releases CMEs quite often. (Depending upon the Sun’s cycle, it could release up to 3 a day, or as few as one every 5 days. But these may or may not be strong enough to have dire consquences for Earthlings.) Most are usually pointing off in a direction that does not effect Earth. But we have been hit by a few, as mentioned above. We have also had some near misses, like the one in July of 2012. At some point in the future, Earth will be hit again.

Now you should have an understanding of what an EMP is. In part two of this series, I will look at what these types of pulses mean to us, what they are capable of doing, and what all we still do not know about them. Essentially: What you can expect if we’re hit by an EMP or CME.

There are many references out there that can help you understand EMPs/CMEs and even prepare for them. We’ll have several other related articles in the near future but to really dig into it, you’ll need to read real books and not just short blog articles. Here are a few suggestions:

What would happen if terrorists detonated a nuclear device high above the United States? What about if the Sun emitted a large coronal mass ejection that resulted in a damaging geomagnetic storm? In either case, electrical power could be lost for months. Shortages would quickly ensue—food, water, and fuel would disappear within days. Widespread panic and suffering would be unavoidable. Are you prepared for these large-scale disasters?

This book will help you to prepare for two end-of-the-world-as-we-know-it (TEOTWAWKI) events: the EMP attack and the solar storm. Each threat is carefully studied with analyses of its likelihood and potential impacts on our nation’s critical infrastructures. Practical preparations are outlined, including steps to meet the fourteen basic needs in the absence of modern utilities, and the use of Faraday cages and uninterruptible power supplies to protect personal electronics.

EMP Survival: :How to Prepare Now and Survive, When an Electromagnetic Pulse Destroys Our Power Grid

Even unplugged electronics can be damaged. Only electronics stored in a faraday cage are protected.

Fuel, communications, power, water, and food will be unavailable within hours when emergency fuel runs out. Gas pumps and even pipelines rely on electronics. Mob violence from mass evacuation of uninhabitable metropolitan areas will be a significant security issue within days. This book describes the risks and details how to prepare and survive.

Guilty Knowledge: What the US Government Knows about the Vulnerability of the Electric Grid, But Refuses to Fix (Center for Security Policy Archival Series)

Over the course of a decade, a stream of credible scientific reports from various government agencies, congressionally-mandated commissions and federal research organizations have warned of the grave vulnerability of our nation’s most important asset: the electric power grid. For millions of us, life in 21st Century America would be all but impossible without access to electricity. As this compendium of the government’s own studies makes clear, the protracted unavailability of the power required for all of our critical infrastructures poses a truly existential threat to our country and its people—unless we take practical and relatively low-cost steps to prevent it.

A Nation Forsaken: EMP: The Escalating Threat of an American Catastrophe

There have been warnings from scientists and other experts for years that the Nation’s electrical grid system and other critical infrastructures that have almost complete dependency on electricity and electronic components are highly vulnerable to an electromagnetic pulse (EMP) event either from natural or man-made causes.

However, Congress and the administrations of previous and current presidents largely have ignored those warnings. Events such as the September 11, 2001, terrorist attack on the United States and then the devastating Hurricane Katrina that revealed vulnerabilities to those infrastructures heightened that concern. Due to the lapse of time and a relatively calm period since those disasters, policymakers have been lulled back into complacency rather than take preventative action against what could be the biggest threat to US national and economic security in our lifetime.

The threat from an EMP attack on our critical infrastructures either from an impending solar storm of serious intensity – expected between 2012 and 2014 – or a high-altitude nuclear explosion are threats that could have long-term catastrophic consequences for our society and our way of life.

In 2008 a congressional commission studied the consequences of an EMP attack not only the power grid itself but also the consequences to every sector of our economy: telecommunications, banking, transportation, food, manufacturing, construction, and energy.

While these critical infrastructures continue to face such an impending crisis, Congress has basically ignored its own commission report and instead has treated the threat of an EMP event as a political football to be punted whenever expedient for their own gain. To date, still nothing has been done to protect the nation.

Michael Maloof breaks down that threat in his book A Nation Forsaken. He even outlines how our own military is similarly vulnerable to an EMP event due to its 99 percent dependency on the nation’s electrical grid system for electricity and communications, raising the high prospect that it may not be able to function to defend the nation in its time of greatest need.

While an EMP event on our civilian infrastructure could be serious, it can be managed if government at the federal, state, and local levels gives a high priority to undertake preventative action to lessen its impact to recover from such an event. Now is the time for Congress to act and stop forsaking our nation.

A police officer in Oklahoma, James is a gun enthusiast and certified police instructor. In his off time, he is a single father who enjoys playing with his kids and watching football.

Contributed by Graywolf of Graywolf Survival.