As the State of Connecticut went through the process of gearing up to push more gun bans and bans on high capacity ammunition magazines, it was estimated that The Constitution State had at least “2.4 million” of the offending magazines within its borders. But now, after the new forced registration law set in, only about 38,000 high capacity magazines were registered. So, where did they all go?

It seems that Connecticut’s set up for future gun confiscation is failing despite that officials are trying to claim that it is a great success. 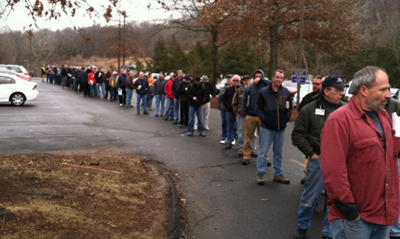 Foolish citizens in Connecticut throwing away their rights as they lineup like cattle for the state’s new registry policy.

Back in 2011 as legislators were mulling over new anti-Second Amendment proposals, the state’s Office of Legislative Research looked into several questions being asked by lawmakers eager to fashion a new gun ban. Lawmakers needed to know how many so-called assault weapons were in the state, how many high capacity magazines were manufactured and how many held in private hands, how many crimes were committed by people using these things, and the like.

One of the findings made by the OLR was that gun owners in the state owned at the very least 2.4 million high capacity magazines–and likely many hundreds of thousands if not millions more.

The final numbers are not yet in but the numbers that are known are fairly complete, if not exact. Thus far, it appears that only some 38,290 high capacity ammunition magazines have been registered.

38,000 is a far cry from the millions of high capacity magazines that the state estimated existed within its borders.

So, where did these millions of magazines go?

All that can be said is that it appears that gun owners in Connecticut are not quite the sheep that jackbooted government officials may have imagined they were. After all, if there really were millions of high capacity magazines in the state–and it is very likely that there are–and they have now gone unregistered, that means that thousands of gun owners have refused to bow to this un-constitutional, anti-Second Amendment law.

Despite that the state is trying to paint a happy face on the grim edifice of this anti-American law, it appears that millions of Connecticut gun owners have thus far simply refused to abide by this law.

Of course, it goes without saying that this law is just the first step to gun confiscation in Connecticut. Everywhere such wide-ranging registration laws have been instituted, gun confiscation has followed.

So, good on the many Connecticuters who have refused to follow this un-American, anti-Constitutional law.