There’s all this talk of “controlling” guns – that is, taking them away from everyone (except those wearing government costumes, ‘natch) but very little about controlling thugs. You know, the violent cretins who create the reason – the necessity – for owning a gun in the first place.

In gun-free DC, a thug produced a knife (not “controlled”) and proceeded to repeatedly stab his helpless (because disarmed) victim. This thug was not controlled.

Nor were the five thugs in Tulsa, OK who barged into the home of 66-year-old Bill Zachary and murdered the unarmed – and thus, helpless – older man. (News story here.)

Violent recidivism – the fancy term for thugs who continue to be thugs, committing one violent crime after the next – is absolutely uncontrolled. Here are some Department of Justice (sic) stats:

These offenders had accumulated 4.1 million arrest charges (italics added) before their most recent imprisonment and another 744,000 charges within 3 years of release. 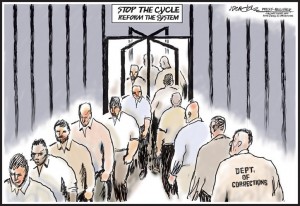 The revolving door of justice spins – meanwhile, the powers-that-be fixate on confiscating the revolvers of people who have never raised a finger at another human being.

The problem, in a nutshell, is not the guns. Everyone – anyone – with a room temperature IQ knows this, even if they will not admit this. The problem is thugs with guns (and without guns, too).  Thugs. Violent predators. Control them – by removing them from circulation – and there will be no need for “controlling” guns. 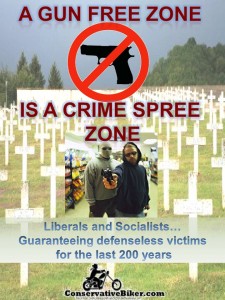 The average citizen could have a closet full of black rifles – and dozens of pistols – and the chances of anyone coming to harm are microscopic.

Yet, rather than impose draconian penalties upon people who have done something awful to fully deserve it, the efforts of our Dear Leaders are concentrated upon inflicting horrendous punishments and proscriptions upon people who have done – wait for it, now – absolutely nothing to warrant it. New York – which routinely releases murderers and rapists and people convicted of multiple brutal assaults (including rape) upon helpless people after serving picayune prison sentences of a handful of years (if that) now threatens – no, promises – to imprison honest citizens whose only “crime” is to be found in possession of the means of defending themselves against the thugs recirculated among them – thugs who are without doubt emboldened in their thuggery because they know the honest citizens have been cowed into helplessness, having surrendered their arms. Maryland, Colorado – perhaps the entire nation – seems ready to follow suit.

No, it is criminal.

Punishing people who haven’t done anything because others have (or might) … while failing to adequately deal with those who have done something. Awful things. Horrendous things. Multiple things. Can anything conceivably be more criminal? Bad things will happen. This cannot be prevented. But once they do happen, to not act to prevent a similar thing from happening again – ever – that is the sine qua non of criminal negligence.

The typical violent thug has a lengthy record of thuggery – and these are just the handful of incidents known to us by dint of the thug’s having been caught/prosecuted/convicted – which criminologists will tell you constitutes a mere fraction of the typical thug’s activities. For every assault conviction on the thug’s record, the thug probably committed a dozen others. Same for rapists – and killers. These data are not in question. 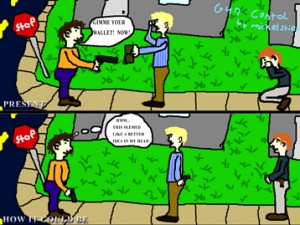 Yet nothing is done.

Or rather, much less is done to control thugs than what’s being proposed (and already enacted)  as far as “controlling” their victims – actual and potential. Raped women are being told they may not posses a gun to defend themselves against rapists. Elderly people are threatened with prison – for using a gun to ward off thugs barging into their homes… .

It is an outrage – the world turned’ upside down. Here’s how to set it right:

Rescind every law denying honest citizens their natural right to possess a gun – any gun.  Impose severe penalties upon any person convicted of using a gun to threaten or harm another person (excepting self-defense). Invade a home with a gun in your hand? Mandatory 25 years in prison, without any chance for parole. In addition to whatever time is levied for the actual home invasion. Actually use the gun – whether the gun was fired or not – 50 years. Shoot someone with it – life.

Or better yet, death.

It is time – long past time – to take out the trash.

“Gun crime” would become a non-problem within a handful of years as the human predators who have rendered American cities and towns uninhabitable are systematically and efficiently – and fairly –  dealt with. People who have preyed upon innocent victims deserve to be dealt with. It is right to deal with them. They have earned their punishment. And we – the rest of us – have a right to be free of them.

Yet the thugs – the violent predators among us – will not be dealt with. Because our Dear Leadership would rather deal with us. The Dear Leaders – Bloomberg, Obama, Schumer, Feinstein, et al – regard us as far more dangerous than the thugs who prey on decent people. Because these Dear Leaders – being secure in their protective bubbles, surrounded by their armed praetorians – understand that thugs are not a threat tothem.  And they could not possibly care less that they are a threat to us. 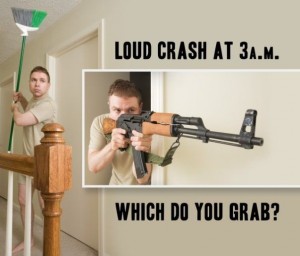 Perhaps worse, though, is the depressing fact that the Dear Leadership can count on tremendous support from a large number of emotionally and intellectually crippled average people – people who have more sympathy for predatory thugs than they do for people – friends and neighbors, fellow citizens – who have never done harm to anyone. They are endlessly willing to give a second (and third and fourth) chance to  known thugs who are “getting their lives together.” Who will – statistically – almost certainly ruin yet another victim’s life once released (again).  But these same people have “zero tolerance” for their fellow citizens who haven’t harmed a soul – but who have asserted their right not to be defenseless against the much-loved thug class.

How about zero tolerance for thuggery? And even better – zero tolerance for those who coddle thugs, who insist on giving them the benefit of every doubt, indulging every excuse  . . . while demanding that non-thugs be treated worse than the system treats the real thing?

Let’s put people who commit violent acts in jail – instead of threatening non-violent people with jail.

It makes too much sense to ever happen, I know.