Cops are the enemy.

A harsh – and global – statement, certainly.

Consider the nature of the job. It is to enforce the law. By definition. It is not to protect any specific individual – you or me – from harm. It is certainly not to serve – other than asautomata  who . . . enforce the law. Whateverthe law is, it must be enforced. The cop will tell you so himself. He is merely doing his job – and his job is . . . to enforce the law. Period. “The law is the law.” We have all heard it. It does not matter whether the law is itself outrageous, or simply stupid. He may even freely confess it.

Consider that for a moment.

In  a doctrinal way, the cop is exactly like the people who were – rightly – strung up at Nuremburg after WWII, who stated – truthfully – that they were just following the orders issued by the lawfully constituted authority. They were not merely thugs. They were duly appointed thugs. They did not do the awful things they did at random, on their own nickle – so to speak. They were told to do it – agreed to do it – and went ahead and did it. Any questions they may personally have had about the rightness or wrongness of what they were doing were put aside. 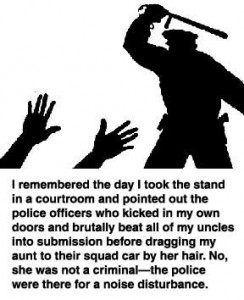 And it is no great leap to go from abusing your fellow man in a small way to doing it in a big way. The principleof the thing is what matters. And the principle is now very well-established indeed.

The rest is merely follow-up. A cop who will pull a gun on you for refusing to wear a seatbelt will do much worse when the time comes. When he is ordered to.

When the law demands it.

So, what sort of man volunteers for such work? Whochooses to enforce the law – whatever the law happens to be?

The answer is – must be – a thug. A person who is both unthinking – and brutal. But worse than merely a thug. Because a mere thug beats you up because he wants your money – or just for the pure sick joy of it. But what sort of person does the same things because he’s told to do them? Who does them, even when he personally may not want to? When he has doubts about the rightness of the thing? But who is nonetheless willing to literally kill a fellow human being over it – if the law tells him he must?

Place yourself for a moment in a cop’s shoes – as distasteful an exercise as that may be.

You are told to man a “safety” checkpoint at which it will be your job to threaten everyone who happens to be on that particular road with lethal violence if they do not stop their vehicle, produce identification and submit to an interrogation as to their comings and goings. These innocent people – who have given you no reason to suspect them of having done anything wrong  – must submit to your orders, must obey your commands. If they passively decline to do so – if they merely assert their ancient right as human beings to be left in peace – you will apply force. You will bash open their window if they decline to roll it down. You will drag them through the window if they refuse to comply with your orders to exit the vehicle. If they in any way attempt to fend off your brutal, unprovoked assault – you may kill them.

You are told to break up a “protest” – even though the “protestors” are entirely peaceful and merely exercising their right to air a grievance. Yet you join the thug scrum, with billy clubs and truncheons.

You are ordered to kick in the door of a private residence and drag the occupant out of his bed at gunpoint – because this person is alleged to be in possession of a substance the state has arbitrarily declared to be “illegal.”

You will shoot him to death if he “resists.”

You spend several hours each day manning a radar gun, issuing your fellow human beings stiff fines you know many of them cannot afford, which will place a great burden on their ability to pay the rent or put food on the table for their families, for conduct you yourself do routinely (e.g., “speed”) and which you know perfectly well to be harmless. But if they object, you will pile on.

What sort of person signs up for such work?

The foregoing is merely a small sampling of countless scores of similar examples we’re all well-familiar with. A cop’s work is to arrest and cage people who do not obey the law.  Nothing less. And their human rights be damned. If they object, if they resist, the cop has license under the law to assault them.

It is a fair summary – as awful as it may be to deal with it, emotionally – even intellectually. 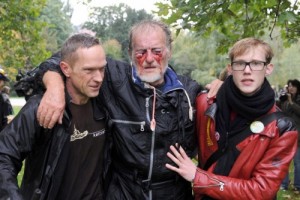 It is simply not possible for a morally decent person to choose  this line of work – or at least, to continue in this line of work, having come to grips with the nature of the work. Because it is a line of work that requires the surrender of one’s humanity. Of the thing that makes a human being other than an animal. That is, your ability to choose to do the rightthing – and to do it.

If the law so commands it.

Just as the law commanded in Nazi Germany and Soviet Russia. As it is commanding here.

A guy might be a friendly neighbor – and seem like a good person. And in a way, he might be a good person – to his family, those he knows personally. But when he puts on that costume, he will threaten harmless, innocent fellow human beings with lethal violence, cage them, rob them of their dignity, violate their rights as human beings – if the law so commands it.

This person, this cop, will demand immediate submission to a literally  endless litany of tyrannical edicts – or else. Exactly like a a member of the GRU, or the NKVD.

And such people are lauded by this society asheroes for this! (Just as they were lauded as heroes – literally – of the old Soviet Union.)

For abusing middle-aged women half their size. Old men. Shooting people’s dogs in the name of “officer safety.”

Would it not be heroic to refuse to do such things?

Of course, few cops are willing to step up in this manner. To be real heroes –  by taking a stand for right, and with their fellow human beings as opposed to being the strutting – but simpering – tools of a malevolent system they are too afraid to question.

Much less take a meaningful stand against.

A system that rewards them for brutalizing others. 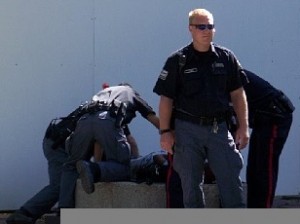 Do cops do some good (honest, morally clean) work? Certainly. But it is increasingly incidental. It does not negate the everyday abuses they routinely commit. If an abusive husband who beats his wife daily one day rescues her from a burning car, does that make him any less a cretin?

I, like many others, instinctively want to support police. Rather, I want to support those who try to keep the peace. The police were at one time at least nominally in the peace-keeping business. To a great (or at least much greater extent than today) they left people who were not actual criminals (thieves, those who committed physical assaults, murderers, etc.) alone. There were, of course, petty infractions one had to mind – but generally, the average person could live his life with little, if any, significant worry about the law – or its enforcers. It took quite a bit to justify a cop unholstering (much less using) his weapon. People did not get threatened with lethal violence for politely declining an order to “buckle up for safety” – because such an order would have been inconceivable in the America of the not-so-distant past. Anyone much over 40 will remember this rapidly receding world. Cops had some sense of proportion – and would have felt ashamed to do the things they are now called upon to do routinely.

And which they do all-too-willingly.

Imagine: A Fourth (and Fifth) Amendment that was respected by the cops – and if not by them, then by thecourts, certainly. Cops used to have to have a reason – not a hunch, but a specific cause – to stop you, much less force you to submit to a search. If they could not produce a substantive reason, then they had to leave you alone – and if they did not live you alone, then whatever they did to you would have consequences. For them. 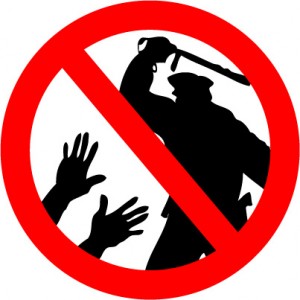 Now, it is the reverse.

The courts have conferred upon cops essentially limitless and unaccountable authority – which means, open season on us. They are empowered to do literally anything, for any (or no) reason at all, beyond their desire to do so. Beyond, it is the law.  The cop is merely doing his job.

And if we have nothing to hide, why worry?