Markets crash not from “bad news” but from the exhaustion of temporary stability.

Yesterday I made the case for a Financial Singularity that will never allow stocks to crash. We can summarize this view as: the market and the economy are not systems, they are carefully controlled monocultures. There are no inputs that can’t be controlled, and as a result the stock market is completely controllable.

Today I make the case for a crushing stock market crash that isn’t just possible or likely–it’s absolutely inevitable. The conceptual foundation of this view is: regardless of how much money central banks print and distribute and how much they intervene in the markets, these remain complex systems that necessarily exhibit the semi-random instability that characterizes all complex systems.

This is a key distinction, because it relates not to the power of central banks but to the intrinsic nature of systems.

One of the primary motivators of my work is the idea that systems analysis can tell us a great deal about the dysfunctions and future pathways of the market and economy. Systems analysis enables us to discern certain pathways of instability that repeat over and over in all complex systems–for example, the S-Curve of rapid growth, maturation and diminishing returns/decline.

One ontological feature of complex systems is that they are not entirely predictable. An agricultural monoculture is a good example: we can control all the visible inputs–fertilizer, seeds, water, pesticides, etc.–and conclude that we can completely control the output, but evolution throws a monkey wrench into our carefully controlled system at semi-random times: an insect pest develops immunity to pesticides or the GMO seeds, a drought disrupts the irrigation system, etc.

The irony of assuming that controlling all the visible inputs gives us ultimate control over all outputs is the more we centralize control of each input, the more vulnerability we introduce to the system. 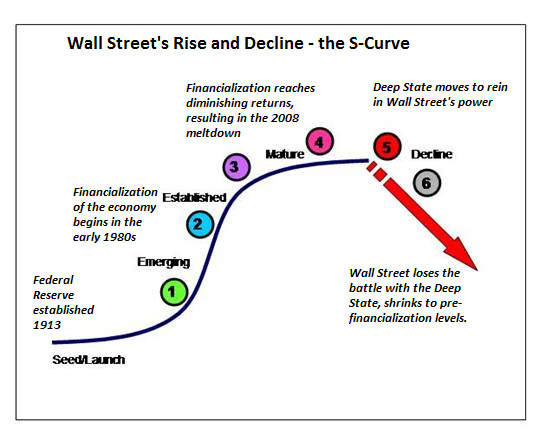 Those arguing that central banks (and their proxies) can control the stock market have the past six years as evidence. Those of us who see this heavy-handed control as increasing the risk of unpredictable instability have no systems-analysis model that can pinpoint the dissolution of central bank controlled stability. As a result, we seem to be waiting for something that may never happen.

Despite its inability to predict a date for the collapse of stability, I still see systems analysis as providing the most accurate and comprehensive model of how complex systems function in the real world. If the economy and the market are indeed systems, then we can predict that any level of control will fail no matter how extreme, and it will fail in an unpredictable fashion that is unrelated to the power of the control mechanism.

Indeed, we can posit that the apparent perfection of central-bank engineered stability (i.e. a low VIX and an ever-rising market) sets up a crash that surprises everyone who is confident that central-bank monocultures never crash. In the real world, manipulated stability is so vulnerable to cascading collapses that crashes are probabilistically inevitable.

That raises the question; why not crash now? After all, all the good news is known and priced in, and all the bad news has been fully discounted. Why shouldn’t global stock markets crash big and crash hard, not in two years but right now?

As I noted in The Coming Crash Is Simply the Normalization of a Mispriced Market, this line from songwriter Jackson Browne captures the ontological falsity of permanent market stability: Don’t think it won’t happen just because it hasn’t happened yet.