Watts, who runs the groups Moms Demand Action and Everytown for Gun Safety, and is funded by billionaire former Mayor of New York Michael Bloomberg, complained that an op-ed in the New York Times by Bethany Mandel was accompanied by a photo of a woman of color.

Interesting that the New York Times paired this op-ed by a white woman based on her anecdotes of fear and paranoia – instead of actual gun safety data – with a photo of a woman of color… https://t.co/gDayS7DcsX

The op-ed describes how Mandel’s mother used a gun to protect her from a would-be intruder when she was a child and how that event inspired her to own a gun to protect her family. Mandel and her husband Seth are Jewish and were targets of anti-Semitic “alt-right” trolls during the 2016 election.

Hi Shannon – my address was published by the Daily Stormer with a target literally put on my back. My local police department still drive by my house several times a day. Not exactly tinfoil hat paranoid over here.

Because your privilege in feeling that a gun will make you safer is in part because you are white. CDC data actually shows the opposite about gun ownership.

Mandel then recounted her “privileged” upbringing, which involved poverty, her mother passing away when she was 16 and her father’s suicide when she was 19.

Come on now Neon, I just took my mom off life support at 16, had my father hang himself when I was 19 and grew up in a single wide trailer in Northrup's Trailer Park in upstate New York. Besides that I've been truly #blessed.

Watts was not interested, insisting Mandel’s skin color was the major determining factor in her life, not her any of the hardships she worked through. In a tweet she eventually deleted, Watts repeated her claim that race makes it safe for Mandel to protect her family with a gun, and if Bethany disagrees it’s because she does not “believe in racism.” 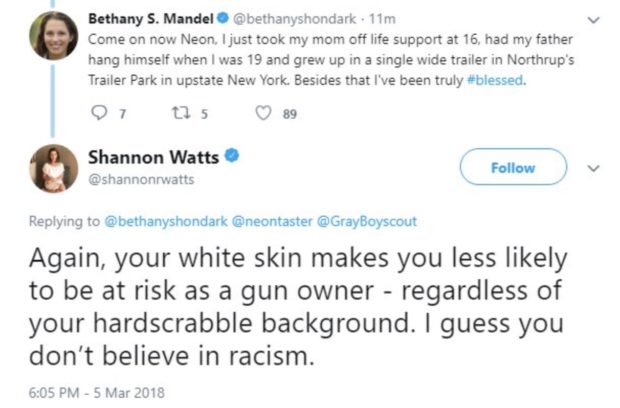 Watts remained disinterested in the concept of defending one’s self from threats by owning a weapon, preferring a dog instead.

I get doxxed every week. I got a dog. https://t.co/oVPSIZTEDA

She then tried to one-up Mandel’s concern for her family by citing her own.

My family and I are threatened with death by your followers – actual gun extremists – on a routine basis and will be again because of your tweet.

Over 50 women are shot and killed by intimate partners every month. Rhetoric about guns endangers women; it doesn’t make them safer. https://t.co/BzH4RkjJeo

Contributed by Derek Hunter of The Daily Caller News Foundation.