On Monday, the price of U.S. oil dropped below 38 dollars a barrel for the first time in six years.

The last time the price of oil was this low, the global financial system was melting down and the U.S. economy was experiencing the worst recession that it had seen since the Great Depression of the 1930s.  As I write this article, the price of U.S. oil is sitting at $37.65.  For months, I have been warning that the crash in the price of oil would be extremely deflationary and would have severe consequences for the global economy.  Nations such as Japan, Canada, Brazil and Russia have already plunged into recession, and more than half of all major global stock market indexes are down at least 10 percent year to date.  The first major global financial crisis since 2009 has begun, and things are only going to get worse as we head into 2016.

The global head of oil research at Societe Generale, Mike Wittner, says that his “head is spinning” after the stunning drop in the price of oil on Monday.  Just like during the last financial crisis, we have broken the psychologically important 40 dollar barrier, and there are concerns that we could go much lower from here… 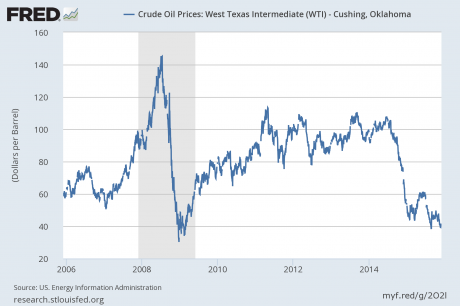 One analyst told CNBC that he believes that we could soon see the price of U.S. oil go all the way down to 32 dollars a barrel…

“We’re in a tug-of-war between a heavily shorted market and a glut of oil in the U.S. and globally, as Saudi Arabia continues to produce oil at elevated levels to maintain market share,” said Chris Jarvis at Caprock Risk Management, an energy markets consultancy in Frederick, Maryland.

“Couple this with a strengthening dollar as the market anticipates a U.S. rate hike this month, oil is heading lower with a near term target of $32 for WTI.”

Analysts at Goldman Sachs are even more pessimistic than that.  According to Business Insider, they are saying that we could eventually see the price of oil go below 20 dollars a barrel…

At OPEC’s meeting on Friday, member countries decided to set its production level at 31.5 million barrels per day, and did not agree on what the new limit should be.

After OPEC’s meeting, commodity strategists at Goldman put out a note saying that oil prices could plunge another 50% in the coming months, as the oil market tries to rebalance the supply and demand situation.

That may sound really good to you, especially if you fill up your gas tank frequently.  But the truth is that plunging oil prices are exceedingly bad for the U.S. economy as a whole.  In recent years, the energy industry has been the primary engine for the creation of good jobs in this country, and now those firms are having to lay off people at a frightening pace.  Not only that, CNBC’s Jim Cramer is warning that many of these firms may actually start going under if the price of oil doesn’t start going back up soon…

Cramer made his remarks after the Organization of the Petroleum Exporting Countries decided not to lower production on Friday.

“This was a devastating blow for the U.S. oil industry,” Cramer said.

On Monday, we witnessed another benchmark that we have not seen since the last financial crisis.

I watch a high yield bond ETF known as JNK very closely.  On Monday, JNK broke below 35 for the first time since the financial crisis of 2008.  Just like 40 dollar oil, this is a key psychological barrier.

So why is this important?

As I discussed last week, junk bonds crashed before stocks did in 2008, and now it is happening again.  If form holds true, we should expect U.S. stocks to start tumbling significantly very shortly.

Meanwhile, another notable expert has come forward with a troubling forecast for the global economy in 2016.  Just like Citigroup, Raoul Pal believes that there is a very significant chance that we will see a recession next year…

In July, Pal predicted that the Institute of Supply Management’s (ISM) manufacturing index would break the key level of 50 late in 2015.

“I use the ISM as a guide to the global business cycle, not just the US cycle,” Pal told Business Insider.

What amazes me is that so many people out there cannot see what is happening even though the next great crisis has already started.  The evidence is all around us, and yet so many choose to be willingly blind.

Instead of fixing our problems after the last crisis, we just papered them over with lots of money printing and lots more debt.  And of course all of this manipulation just made our long-term problems even worse.  I really like how Peter Schiff put it recently…

What’s happening is pretty much what we would anticipate. I don’t see from the data any real economic recovery, certainly not in the United States.

The bills are going to come due. Right now interest rates are being kept at zero which makes it possible to service the debt even though it’s impossible to repay it… at least we can service it. But once interest rates go up then we can’t even service it let alone repay it.

And then the party is going to come to an end.

Indeed – the party is coming to an end, and a new financial crisis is playing out in textbook fashion right in front of our eyes.

Hopefully you are already prepared for what is coming next, because it is going to be extremely painful for the U.S. economy.