Germany’s international broadcaster Deutsche Welle (DW) published a video report of immense implications – possibly the first national broadcaster in the West to admit that the so-called “Islamic State” (ISIS) is supplied not by “black market oil” or “hostage ransoms” but billions of dollars worth of supplies carried into Syria across NATO member Turkey’s borders via hundreds of trucks a day.

The report titled, “‘IS’ supply channels through Turkey,” confirms what has been reported by geopolitical analysts since at least as early as 2011 – that NATO member Turkey has allowed a torrent in supplies, fighters, and weapons to cross its borders unopposed to resupply ISIS positions inside of Syria.

In one surreal scene from the DW report, anti-Syria terrorists are seen walking across the border and literally shot dead just on the other side by Kurdish fighters.

Local residents and merchants interviewed by Germany’s DW admitted that commerce with Syria benefiting them had ended since the conflict began and that the supplies trucks carry as they stream across the border originates from “western Turkey.” The DW report does not elaborate on what “western Turkey” means, but it most likely refers to Ankara, various ports used by NATO, and of course NATO’s Incirlik Air Base.

While DW’s report claims no one knows who is arranging the shipments, it does reveal that the very torrent of trucks its film crew documented was officially denied by the Turkish government in Ankara. It is a certainty that Turkey is not only aware of this, but directly complicit, as is NATO who has feigned a desire to defeat ISIS but has failed to expose and uproot ISIS’ multinational sponsorship and more importantly, has refused to cut its supply lines – an elementary prerequisite of any military strategy.

ISIS Menace Was NATO All Along 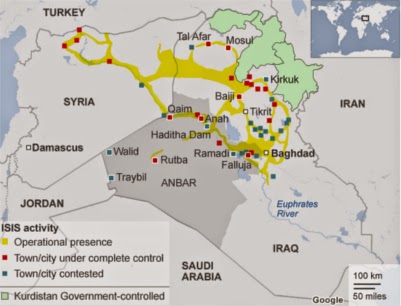 Image: Even by looking at the Western media’s maps of ISIS’ territorial holdings it is obvious it is not a militant force springing up in Syria or Iraq but rather an invasion force originating from NATO territory.

ISIS supply lines leading from NATO territory should be of no surprise.

As reported since as early as 2007, the US and its regional accomplices conspired to use Al Qaeda and other armed extremists in a bid to reorder North Africa and the Middle East. It would be Pulitzer Prize-winning journalist Seymour Hersh in his article, “The Redirection: Is the Administration’s new policy benefiting our enemies in the war on terrorism?” that explicitly stated (emphasis added):

To undermine Iran, which is predominantly Shiite, the Bush Administration has decided, in effect, to reconfigure its priorities in the Middle East. In Lebanon, the Administration has coöperated with Saudi Arabia’s government, which is Sunni, in clandestine operations that are intended to weaken Hezbollah, the Shiite organization that is backed by Iran. The U.S. has also taken part in clandestine operations aimed at Iran and its ally Syria. A by-product of these activities has been the bolstering of Sunni extremist groups that espouse a militant vision of Islam and are hostile to America and sympathetic to Al Qaeda.

Of course, these “extremist groups” who “espouse a militant vision of Islam” and are “sympathetic to Al Qaeda,” describe the “Islamic State” verbatim. ISIS constitutes NATO’s mercenary expeditionary force, ravaging its enemies by proxy from Libya in North Africa to Lebanon and Syria in the Levant, to Iraq and even to the borders of Iran. Its seemingly inexhaustible supply of weapons, cash, and fighters can only be explained by multinational state sponsorship and safe havens provided by NATO ISIS’ enemies – primarily Syria, Hezbollah, Iran, and Iraq – cannot strike. DW’s report specifically notes how ISIS terrorists regularly flee certain demise in Syria by seeking safe haven in Turkey.

One of NATO’s primary goals since as early as 2012, was to use various pretexts to expand such safe havens, or “buffer zones,” into Syrian territory itself, protected by NATO military forces from which “rebels” could operate. Had they succeeded, DW camera crews would probably be filming convoys staging in cities like Idlib and Allepo instead of along Turkey’s border with Syria.

With the documented conspiracy of the US and its allies to create a sectarian mercenary force aligned to Al Qaeda, the so-called “moderate rebels” the US has openly backed in Syria now fully revealed as sectarian extremists, and now with DW documenting a torrent of supplies originating in Turkey, it is clear that the ISIS menace NATO poses as the solution to, was in fact NATO all along. What is  revealed is a foreign policy so staggeringly insidious, few are able to believe it, even with international broadcasters like DW showing ISIS’ supply lines leading from NATO territory itself.