Editor’s Note: At the time this threat was released, officials rebutted it with, “There is no credible threat that members of a militant gang known as the Black Guerrilla Family are planning attacks on NYPD cops.” Now just a few weeks later, and that exact scenario went down and during an anti-terrorism drill no less. What are the odds? 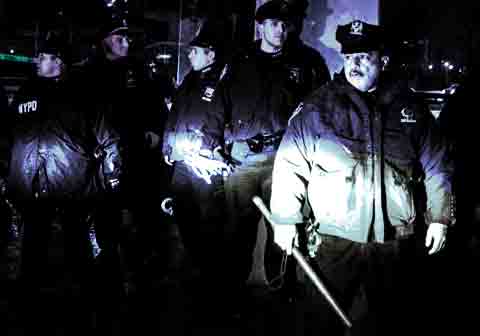 While outrage continues to brew over the non-indictment of the officer that choked Eric Garner to death for selling “loose” untaxed cigarettes on the streets of New York, the NYPD is digging in, as the above New York Daily News image suggests.

Amid anti-police sentiments, the NYPD has claimed that members of the “Black Guerilla Family” are threatening to shoot on-duty police officers in New York. The group is known as an “ideological African-American Marxist revolutionary organization composed of prisoners” set up in the sixties, with inspiration from black leaders including Marcus Garvey.

The New York Daily News carried the exclusive, and included a photo of document with the typed warning:

“On 05 Dec. 2014 @ approx 1846 hours, OC#(redacted) forwarded a credible threat to Detectives assigned to Homicide Section in reference to Officer Safety. The threat has been verified and is currently being disseminated to lower command. Sources state that 10 BGF members (Black Gorilla Family) have began preparing to shoot an on duty police officer. Further info will be made available as it becomes ready.”

An undercover NYPD cop learned of the hit put out on officers Friday evening — three days after a Staten Island grand jury decided not to indict Officer Daniel Pantaleo in Garner’s death. Mullins confirmed late Saturday night that the gang was gunning for officers.

Union leaders ordered all officers, on duty and off, to take extra precautions.

“Please WEAR your VESTS and carry your firearm off-duty along with additional magazines,” Mullins said in an alert. “Your priority is to go home at the end of your tour!”

However, a previous report also carried police statements claim that their was NO credible threat of attempts to kill on-duty officers:

There is no credible threat that members of a militant gang known as the Black Guerrilla Family are planning attacks on NYPD cops, officials said Sunday.

“We are aware of the reports of this anonymous general threat against police. However, at this time there is no information to indicate that this is a credible threat against the NYPD,” a Police Department spokesman said.

So is this just a bunk warning? Is the NYPD being targeted, or not?

It is difficult to know. Regardless, like a lot of phony, dubious (or at least foggy) terrorism threats that have been publicized over the last decade and a half, the threat against NYPD officers gives reason enough to double down the police presence in the Big Apple, and perhaps shines a sympathetic light on the department at a time when many people targeted them with anger after the decision not to indict Officer Daniel Panteleo for an egregious case of excessive police power caught on video.

Public opinion over police behavior has understandably been at the center of the national conversation.

After all, in the wake of the grand jury decision in the Eric Garner case, it was reported that some cops were caught boasting on social media sites comments like “Let us kick some thug ass,” interpreting the decision as virtual free reign on police force.

The possibility of direct violence targeting police yet again underscores the breadth of the divide engulfing the country over police violence, with particular focus on incidents against unarmed black men as seen in Ferguson and beyond.

Over the weekend, protests in response to the Eric Garner grand jury decision turned violent a coast away in Berkeley, California, with police firing rubber bullets, smoke grenades and flares at demonstrators.

The divide deepens, and continues.

Rise of the Warrior Cop: The Militarization of America’s Police Forces

Police State USA: How Orwell’s Nightmare is Becoming our Reality