The scenario that best fits the facts is a spontaneously initiated “drastic political protest” by the captain that went awry.

At long last, a plausible scenario of what happened to Flight 370 has emerged. By plausible I mean that the scenario fits all the known facts.

The key piece of evidence has finally been released by Malaysian authorities: Pilot Spoke to Air Controllers After Shutoff of Data System (NYT.com).

Given the strong political views of the captain and his mastery of the Boeing 777, all evidence points to the captain as the pilot who turned off the communication links and was in command of the aircraft thereafter.

Malaysia Airlines Flight 370 search grows as pilots face increased scrutiny (CNN.com)
Though early reports on the captain were limited to neutral comments by peers that he was a nice guy and a devout family man, the strength of his opposition to the current regime in Malaysia is now coming to light:

Captain Zaharie Ahmad Shah, a father-of-three, was said to be a ‘fanatical’ supporter of the country’s opposition leader Anwar Ibrahim – jailed for homosexuality just hours before the jet disappeared.

It has also been revealed that the pilot’s wife and three children moved out of the family home the day before the plane went missing.
Anwar Ibrahim is a broadly popular democracy icon and former deputy prime minister whose prosecution on a charge of sodomy is seen by many Malaysians as political persecution.

‘Colleagues made it clear to us that he was someone who held strong political beliefs and was strident in his support for Anwar Ibrahim,’ another investigation source said. ‘We were told by one colleague he was obsessed with politics.’

What makes this significant is the Malaysian authorities’ attempts to suppress this possible motive.

Malaysian officials initially appeared keen not to direct any suspicion towards Zaharie or his co-pilot, 27-year-old Fariq Abdul Hamid, who was last week revealed to have invited two women passengers into the cockpit and smoked on an earlier flight to Phuket.

But evidence of the way the plane’s transponder and communication systems were disabled and the way the plane was expertly flown over the Indian Ocean apparently using navigational waypoints meant only a skilled aviator could have been at the controls. Investigators were also baffled by why, if hijackers took over the plane, there was no Mayday call or signal from the two pilots to say the cockpit had been breached.

Thus we have motive and clear evidence that it was the captain, not the co-pilot, who was in command of Flight 370. Enraged by the Soviet-style show-trial and imprisonment of his political hero, the captain may have “sabotaged the flight as a form of drastic political protest.” Flight 370: Was Hijacking The Pilot’s Political Revenge?

Now add in that neither the co-pilot nor the captain requested each other, and it seems increasing likely that the captain was making it up as he went along, applying his deep knowledge of the aircraft and navigation to sketch out a makeshift initial plan that was dynamically modified along the way.

I think we can easily trace a plausible series of steps the captain initially took, and then speculate knowledgeably about the challenges and decision trees that arose later in the flight.

The first challenge would be to render the co-pilot unable to contest his control of the aircraft. The easiest way would have been to dissolve a sedative in a beverage and coax the co-pilot into drinking the Mickey Finn.

The “mumbling co-pilot” heard by the airline pilot flying to Japan who radioed Flight 370 offers tantalizing (if scant) evidence of this. (Interestingly, that pilot was confident he spoke with the co-pilot, not the captain.)

Alternatively, the co-pilot fought for control of the aircraft, one explanation of the abrupt climb to 45,000, well above the aircraft’s designed ceiling.

If there was a struggle, clearly the co-pilot lost that battle or had already been incapacitated by other means.

Another explanation for the climb to 45,000 feet and the subsequent drop to 23,000 feet is that the captain sought to deprive the passengers of oxygen for long enough to render them unconscious but not long enough to kill them.

Given the profile of the captain that is emerging, I see little evidence of a personality who would set out to kill everyone on board, including himself. I believe the evidence strongly suggests a political motive, to embarrass the Malaysian government and perhaps to do so by seeking asylum in another country.

Once again, the key here is to understand the incomplete nature of the captain’s plan: after the initial phase was successful–turning off the ACARS and transponder, incapacitating the co-pilot, and moving beyond the range of Malaysia’s military radar– a number of destinations might have occurred to the captain. It’s important to note that flying was not just the captain’s vocation, it was also his hobby. I think it is safe to say his life revolved around aviation and flying.

Data showing the number of plausible runways where the plane could have touched down – which need to be at least 5,000ft – offer a baffling number of potential locations.

According to a map drawn up by U.S. radio station WNYC, there are 634 locations which could fit, from Australia to the Maldives to Pakistan.

However, the true number is likely to be even higher, as estimates of how far the plane could have traveled have been increased since the calculations were carried out. 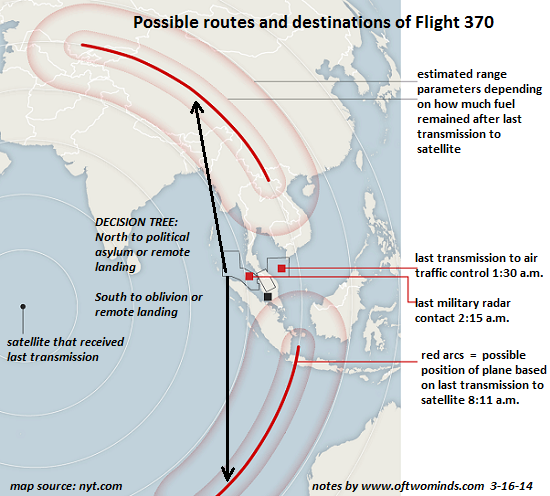 If the co-pilot had regained control of the aircraft, either alone or with the aid of crew and passengers, he would have first turned on the ACARS and transponder and sent a Mayday signal. Since this didn’t happen, we can be confident that the captain was in command of Flight 370 for the duration of the flight–roughly 7.5 hours.

While we don’t know if the aircraft landed at some point, we do know the last ping to the satellite was at 8:11 a.m., roughly 6 hours after the last military radar contact.

Here are some other points to consider:

The fact that the Malaysian authorities withheld the sequence of events in the cockpit strongly suggest that they quickly identified the potential for a political motivation for the flight deviation and sought to suppress speculation along this line of inquiry.

This also explains why they withheld the military radar data for three days, and their continuing reluctance to share information or come clean about what they know. They fear the truth, and with good reason.

The captain’s home flight simulator suggests that he may well have practiced all sorts of landing scenarios, just out of curiosity or to sharpen his skills in outlier situations. Think about it: if you already have over 18,000 hours in the cockpits of advanced aircraft, you’re not going to practice conventional landings you could do in your sleep. That would be beyond boring to someone of his experience.

Given the few hours the captain had to assemble his plan, it is likely that once the initial phase was successful, he might have changed his mind, perhaps more than once.

Given his long experience in aviation, I think it very likely that he knew that the primary and military radars in the region were usually turned off at night. Off-the-record confirmations of this have come from Thailand and Indian officials with knowledge of radar covering the Andaman and Nicobar islands.

Thus it is not surprising there were no primary radar sightings in the region: most or perhaps all of the radars were turned off.

It’s also worth noting that most of the primary radars in the region have limited ranges–100 miles or less appears to be average. It is more than possible to thread a flight through the gaps in coverage, even if the radars were active.

Let’s assume my speculation is accurate and the captain had no intention of crashing the 777 and killing all on board. As I noted in my first entry on Flight 370, if that was his intention (or simply suicide), why fly for hours? Despite his best intentions, he may have encountered some problem that he responded to incorrectly; it’s even possible that he missed his intended destination or became confused about his location.

The scenario that best fits the facts is a spontaneously initiated “drastic political protest” by the captain that went awry, despite his intentions and experience.

One last thought: since the U.S. must monitor potential airborne threats and nuclear explosions virtually everywhere on the planet (with the exception of Antarctica), why wouldn’t the U.S. have wide-aperture thermal imaging assets in space? And if the U.S. has space-based thermal imaging assets, would they be so low quality that the heat signature from two large jet engines would not show up? That seems unlikely.

Since it has long been known that the U.S. has “wired the oceans for sound,” (SUBMARINES, SECRETS, AND SPIES – NOVA/PBS) it’s also likely that the sound of a large aircraft hitting the water would also have been detected, regardless of the remoteness of the location.

All of which is to say that it seems probable that the global and space-based intelligence gathering assets of the U.S. recorded some sort of signals that could provide clues to the final resting spot of Flight 370.