Why are role-playing actors being hired to portray biological/chemical attacks at political events this summer? Could it foreshadow a false flag attack, or are they just standard training exercises?

Companies like IIF Data Solutions are contracted by government agencies to supply “crisis actors” for mass casualty drills. IIF Data, who boasts a senior staff with “more than 250 years cumulative experience serving with DOD agencies,” states on their website:

Besides providing role players for large annual drills like Vigilant Guard, they also work with more local training events. They are currently hiring actors for potential biological attacks at political events this summer. Below is a table outlining the scenarios and fake injuries needed for the drills: 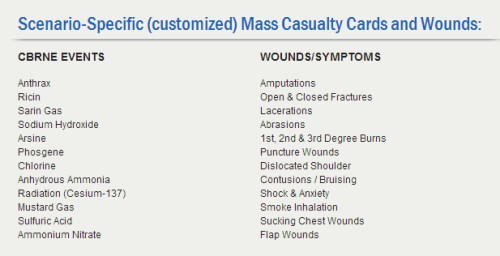 IIF is now hiring for these political events this summer:

What does this have to do with the potential of a real attack at these events?  Well, nearly all major “terror” attacks including 9/11, the London Tube bombings on 7/7, and the Boston Marathon bombing all had drills taking place the same time depicting the exact attack scenario that played out.

And evidence has emerged that “crisis actors” were used at tragic events like the Boston Marathon bombing and the school shooting in Sandy Hook Connecticut.

What are the chances that the same woman (actor) was available to CNN to describe the mother of the Sandy Hook shooter and then reappear as a witness for two separate events that unfolded in Boston?

Could it be that crisis actors are being used for live mass casualty events in addition to training drills? This would seem to indicate either foreknowledge of these events, or at least for information control following these events.

Foreknowledge would mean that these events are false flag operations by insiders (perhaps with “250 years cumulative experience serving with DOD agencies”) in order to shape the propaganda of the aftermath.

If IIF actors did indeed play a role in real mass casualty events in the past, could IIF drills be an indicator of the type of attack that could happen in the future?

Be vigilant, and remember this article should a tragic chemical or biological attack occur this summer.