Georgian-American business executive Irakly Kaveladze is suing Berkeley professor emeritus George Lakoff for claiming on MSNBC that he was a “major person who has been responsible for money laundering from Russia and other post-Soviet countries.”

Kaveladze was caught up in a money laundering investigation in 2000 but was never convicted of a crime. Kaveladze denied any wrongdoing at the time and said the investigation was a “witch hunt.”

LOS ANGELES — Irakly “Ike” Kaveladze, the so-called “eighth man” at a controversial 2016 meeting between top associates of President Donald Trump and a politically connected Russian lawyer, has sued a California linguist for criticizing him on a cable television show this month.

He sued him “for criticizing him.”

In his complaint, Kaveladze accuses George Lakoff of libel and slander for comments he made in an MSNBC interview with Chuck Todd, in which Lakoff called Kaveladze “the major person who has been responsible for money laundering from Russia and other post-Soviet countries.”

In the complaint filed Tuesday in California’s Orange County, where Kaveladze resides, he claims he is “a law-abiding American citizen, father and businessman” who “seeks by this action to dispel the cloud created by Lakoff’s baseless and scurrilous accusations.”

A lawyer for Lakoff, a professor emeritus of cognitive science and linguists at University of California, Berkeley, appeared to welcome the litigation, saying in an email that “we look forward to demonstrating the accuracy of Dr. Lakoff’s statements.”

“This is the United States of America,” said the attorney, Travis LeBlanc. “We will vigorously defend against this baseless lawsuit attacking Dr. Lakoff’s First Amendment rights.”

Lying about people on television with impunity is not a “right” guaranteed by the First Amendment. Our nation has libel laws and they’re being applied by juries more than ever.

Here’s Lakoff’s appearance on MSNBC, his money laundering comments are after the 5 minute mark:

You can see from Lakoff’s Wikipedia page he’s a cultural marxist who pushes BS straight out of the Frankfurt School.

All their ideas revolved around psychoanalyzing normal Americans as though they’re somehow sick in the head because they hold traditional values and don’t want their society to fall to a Bolshevik revolution.

On the other hand, liberal stooges who hate their parents and want to see everything their ancestors created destroyed in furtherance of their Bolshevik revolution are the peak of mental health.

Lakoff has publicly expressed both ideas about the conceptual structures that he views as central to understanding the political process, and some of his particular political views. He almost always discusses the latter in terms of the former.

Moral Politics (1996, revisited in 2002) gives book-length consideration to the conceptual metaphors that Lakoff sees as present in the minds of American “liberals” and “conservatives”. The book is a blend of cognitive science and political analysis. Lakoff makes an attempt to keep his personal views confined to the last third of the book, where he explicitly argues for the superiority of the liberal vision.

Lakoff argues that the differences in opinions between liberals and conservatives follow from the fact that they subscribe with different strength to two different central metaphors about the relationship of the state to its citizens. Both, he claims, see governance through metaphors of the family. Conservatives would subscribe more strongly and more often to a model that he calls the “strict father model” and has a family structured around a strong, dominant “father” (government), and assumes that the “children” (citizens) need to be disciplined to be made into responsible “adults” (morality, self-financing). Once the “children” are “adults”, though, the “father” should not interfere with their lives: the government should stay out of the business of those in society who have proved their responsibility. In contrast, Lakoff argues that liberals place more support in a model of the family, which he calls the “nurturant parent model”, based on “nurturant values”, where both “mothers” and “fathers” work to keep the essentially good “children” away from “corrupting influences” (pollution, social injustice, poverty, etc.).Lakoff says that most people have a blend of both metaphors applied at different times, and that political speech works primarily by invoking these metaphors and urging the subscription of one over the other.

Lakoff further argues that one of the reasons liberals have had difficulty since the 1980s is that they have not been as aware of their own guiding metaphors, and have too often accepted conservative terminology framed in a way to promote the strict father metaphor. Lakoff insists that liberals must cease using terms like partial birth abortion and tax relief because they are manufactured specifically to allow the possibilities of only certain types of opinions. Tax relief for example, implies explicitly that taxes are an affliction, something someone would want “relief” from. To use the terms of another metaphoric worldview, Lakoff insists, is to unconsciously support it. Liberals must support linguistic think tanks in the same way that conservatives do if they are going to succeed in appealing to those in the country who share their metaphors.

You’re an evil fascist if you want to preserve your society and not let cultural marxists and their liberal stooges tear it down. That’s what all these cultural marxists’ fake philosophies boil down to. 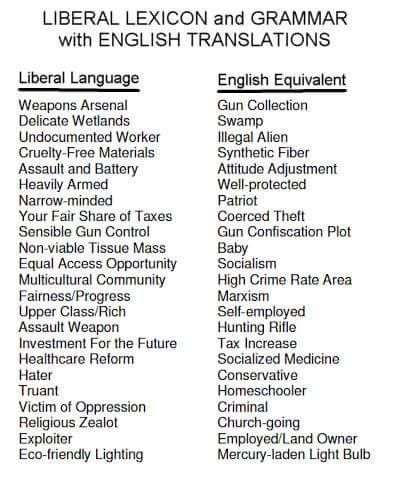 “If I’m not allowed to lie about people with impunity to further my political aims, I’m being oppressed and the First Amendment is being undermined.”

It’ll be quite interesting to see how this case plays out.