Ebola is on the move. Traditionally found in circulating in Africa it has now been discovered in fruit bats in Bangladesh S.E. Asia.

Ebola is a Filovirus that causes a hemorrhagic fever. The internal organs break down and liquify, and as well as bleeding from every orifice blood seeps through the pores of the skin. It is highly contagious and has a mortality rate of some 80%.

Ebola is categorized as a level 4 bio-hazard and as such is only researched in a handful of labs around the globe. It was first categorized in 1976 and is one of only two members of a family of RNA viruses (riboneucleic acid) called the Filoviradae. There are 5 known strains of Ebola, 4 of which are known to infect humans.

Ebola Reston has so far only infected non-human primates.

Until now the reservoir for Ebola has proved elusive. Bats have for sometime been considered to harbour the virus, though studies had not found a significant enough promotion infected to assume it was the primary reservoir. New research by EcoHealth Alliance has shown that around 4% of 276 Rousettus fruit bats tested in Bangladesh carried the antibodies for the Ebola virus. The research has been peer reviewed by the journal ‘Emerging Infectious Diseases’ which is published each month by the Center for Disease Control. (CDC) 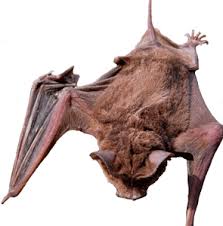 Although more research needs to be done, it seems that the Rousettus fruit bat is a reservoir for this deadly pathogen, that in itself is not too surprising, the shocker is that its been found circulating in bats outside of the African continent.

Other research is looking into the link between fruit eating bats, and non-human primates that consume the same fruits. Many primates are taken and eaten as bushmeat in Africa and that may also suggest a causal link.

The appearance of Ebola out of Africa has long been predicted but until now was not proven. It seems that has changed. More and more people are exposed to infected bats and primates as the disease fans out, and on this occasion at least, arrives on a separate continent. More exposure to Ebola infected creatures will inevitably lead to more cases of Ebola in humans. In Africa most of the sporadic outbreaks have been in low population density areas. The Ugandan outbreak last year is a good example of this. Bangladesh is a highly populated low lying strip of land in S.E.Asia, it could also be the gateway that allows Ebola to move into further into Asia and to countries beyond.