Debt can be substituted for income, but not for long. Central banks have been playing a game for six long years: by lowering interest rates and making credit available, the central banks have encouraged households, enterprises and governments to substitute borrowed money (debt) for income.

This works as a stop-gap, but debt accrues a funny thing called interest that eventually eats the borrower alive. Income is (supposedly) the driver of stock valuations, the financial foundation of rental property and the ultimate arbiter of solvency: households, enterprises and governments whose income cannot meet their debt and spending obligations are insolvent and eventually declare bankruptcy.

The reality that all that really matters is income incentivizes gaming income. Corporations and their officers/stockholders benefit greatly when net income appears to rise smartly, as rising income boosts stock prices and the value of stock options.

So it’s no wonder that S&P 500 Profits Are 86% Higher Than They Would Be Without Accounting Fudges. Fudging operating income with accounting trickery pays such huge dividends, why not indulge in a bit of financial flummery? The chances of anyone questioning the sleight of hand is nil, since the entire financial sector relies on systemic flummery for its profits.

Following the income leads us to wonder how the 99% of households whose income is declining in real terms can borrow and spend more every year. 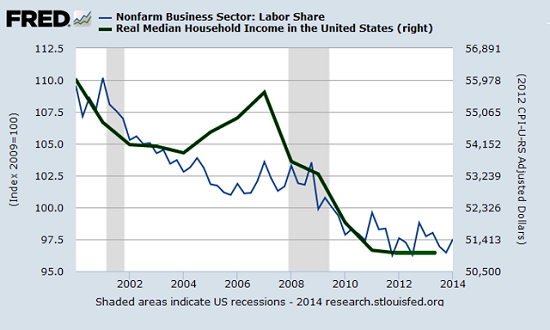 Following the income leads us to wonder how OPEC oil exporters will manage with $250 billion less income in 2015, after suffering a $200 billion decline in 2014.That’s a total of $450 billion of income that’s vanished in a few years.

Since OPEC accounts for about 40% of global oil production, that means oil producers globally will earn $1 trillion less than they did in 2012.

Such primary industrial income has a multiplier effect, which means every $1 of oil income that vanishes means $3 down the spending chain vanishes as workers earn less or are laid off, the stores that depended on oil workers’ spending take a hit, and so on down the line.

Thus the reality is the loss of income isn’t merely $1 trillion–it’s more on the order of $4 trillion, as the multiplier effect subtracts income from everyone in the food chain who depends on oil revenues in a secondary or tertiary role.

Income matters for another reason. Most households, enterprises and governments spend the vast majority of their income in one way or another. If income declines by 5%, that may not appear like much. But if the household, enterprise or government spends 98% of its income on debt service and essentials, that 5% decline puts them in the red by 3%.

It may be possible to borrow more to fill that gap–in essence, borrowing money to pay the interest on previous debt–but this is a financial Black Hole, as there is less income to service rising interest payments.

Once the gravity of insufficient income pulls the household, enterprise or government over the event horizon of insolvency, implosion is inevitable.

So when you read about ever-rising corporate profits, ask if that’s pro forma or actual net income. When the government claims its deficits are declining, check whether its debts are rising faster than the media is reporting.

When your neighbor seems to be spending more, ask if they’re making more net income, or simply borrowing more.

Six long years of lies has persuaded many that the lies can be sustained for another six years–or even sixty years.