On Steve Quayle’s “Q Alert” page, he recently posted the following warning from an Arizona resident:

Hi Steve,
I live in Az and just went to get my drivers license renewed. They handed me a paper with my photo on it and said my new license would be mailed in about 2 weeks. It says it is an ENHANCED DRIVERS LICENSE or EDL. A cursory internet search reveals at least 6 other states are implementing it and that it has a microchip in it that can be read up to 30 feet away. Contains your fingerprint and biometric data and is linked to multipledatabases. In other words it is a REAL ID just under a different name! The American people wholeheartedly rejected the REAL ID yet they are going forward with it anyway by giving it a different name. Please get the warning out.
JK
in Az

Official Existence of the EDL Program

I have searched the local media archives in Arizona and cannot confirm the authenticity of this report. However, the Department of Homeland Security (DHS) has validated the existence of  this program with an admission that the Enhanced Drivers License is indeed a reality in a July, 28, 2014 report. Additionally, an extensive search revealed that Arizona Revised Statutes section 28-3153(D) provides information and the rationale for the existence of the EDL.

I live in Arizona and there was no media coverage of this whatsoever.  It is as if someone just placed this law into Arizona’s Revised Statutes. This was totally done by stealth and history shows that this is a very bad development!

In effect, this, virtually unpublicized national and soon-to-be global ID card will serve as a permission slip to do all of the ordinary things that you presently have the right to do as an ordinary American citizen. Of course, if you are one of the governmental traitors who have perpetrated this fraud upon the people of the United States, and your intention is to eliminate U.S. sovereignty by requiring American citizens to become a part of a global identification system, then this is a requisite step in this treasonous give away of our country.

The National ID and soon to be Global ID system is being sold to the rank and file of Congress as a means to control terrorism and to further prevent illegal immigration. Showing ID’s to board a plane on 9/11 did not prevent the destruction of the Twin Towers now did it? And we have drones and satellites which can read the inscription on a dime from the upper reaches of the atmosphere and we can’t identify and stop foreign nationals from crossing our borders? Our government does want to stop illegal immigration. And now we are being asked to swallow the myth that only an ID can prevent illegal immigration. Only a member of Congress who is more focused on becoming enriched at their insider-trading potential would be distracted enough to fall for this ridiculous excuse. And when one considers that a bi-partisan group of congressman are trying to simultaneously create a path to citizenship for all illegal alien residents, this justification of requiring a Global ID to solve the immigration issues of this country is based wholly on deception.

History Speaks and America Should Listen

If the average citizen is not concerned with the soon-to-be required national ID card, then they should carefully reconsider their position. Global ID cards have played a draconian role in the history of human persecutions and genocides within the 20th century. History clearly teaches that the prevalence of national ID cards should concern all persons who wish to prevent a future national genocide similar to what happened in Rwanda and in Nazi Germany from occurring in America. 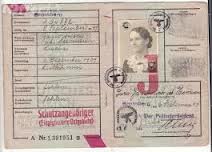 In Nazi Germany (July 1938), only a few months before Kristallnacht (i.e., the night of the broken glass) in which Jewish businesses were targeted by the infamous “Brown Shirts” for destruction, the notorious “J-stamp” was introduced on national ID cards and then later on passports. The use of the “J-stamp” ID cards by Nazi Germany preceded the yellow Star of David badges which led to the subsequent deportation of Gypsies, Jews, homosexuals and political dissidents to the infamous Nazi death camps. In Norway, where yellow cloth badges were not introduced, the J stamped ID card was used in the identification of more than 800 Jews deported to death camps in Eastern Europe.

Identification cards, in Rwanda, were the key factor in shaping, defining and perpetuating ethnic identity which ultimately led to subsequent ethnic cleansing. Once the 1994 genocide in Rwanda began, an ID card with the designation “Tutsi” constituted a death sentence at any checkpoint. No other factor was more significant in facilitating the speed and carnage of the 100 days of mass killing of an estimated one million people in Rwanda.

The Media Propaganda Has Begun

The Wall Street Journal is participating in this media blitz in which they call for an immigration bill that would force every American worker to possess a biometric ID card in order to work.

Since Ron Paul has left Congress, a formidable obstacle to the imposition of this police state measure has been removed. The imposition of a national/global ID system is part of a larger plot to relegate our American citizenship to a greatly diminished global status.

Americans Will Be Part of a Global System 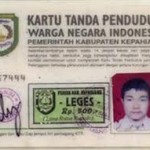 The government of Indonesia has created a multi-modal biometrics identification system that they refer to as a national Electronic ID Card (e-KTP). Indonesia has been successful in enrolling 103 million of its 172 million citizens into their version of the J-Stamp card.

The government of India is on the path towards issuing biometric identity cards to its 1.2 billion people. Indians are assigned a 12-digit ID card containing microchips of individual Identity cards through what they are calling  “The National Population Register” (NPR). The NPR program is mandatory and will soon be a prerequisite to work and buy food.

Even President Obama’s native country of Kenya has a national ID card, in accordance to the Registration of Persons Act, in which all Kenyan citizens who are 18 years or older need to appear before a registrar of the court to obtain the ID, which consists of taking a photograph and submitting their fingerprints to a national registry.

In fact, over 100 countries presently require compulsory identity cards and they are all about to be merged.

History has clearly demonstrated that there can be no question that the National/Global ID Card is a clear and present danger to every American who would be foolish enough to possess one. Obama is already on record of declaring his power to assassinate American citizens. He has used drones to this end and these drones contain facial recognition systems which could hunt down and kill his political enemies as he has done with three U.S. citizens that we know of.

And before coincidence theorists, who deny the validity of any conspiracy theory, state that no president would ever be capable of doing that to the American people, one should ask why would Obama has insisted on an unrestrained and unconstitutional detention authority over American citizens under the NDAA.

My advice is to all Americans is to immediately work towards becoming self-sufficient to such a degree that it appears to others that your life depends on it, because it does. I have spoken with a couple of Arizona governmental employees who have knowledge of this program and they both said that this ID program is a first step to tie gun ownership into your EDL.  This is the first step towards gun confiscation and this sets  a very bad historical precedent which will be the subject of a future article which will examine the link between a national/global ID card and gun confiscation.