As you read this, the United States is experiencing the worst drought it has seen since the Dust Bowl ds of the 1930s.  As you read this, nearly half of all corn crops in the United States are in “poor” or “very poor” condition.  As you read this, 38 major wildfires are ripping across the central and western United States.  The brutal wildfires in Oklahoma have been so bad that they have made national headlines.  The price of corn has hit a brand new record high this summer and so has the price of soybeans.  More than half of all the counties in this country have been declared to be “natural disaster areas” by the U.S. Department of Agriculture at this point.  Things are so bad for ranchers that the CEO of Smithfield Foods is projecting that meat prices will rise by “significant double digits” in the months ahead.  Sadly, this drought is projected to continue throughout August and into September.  As you will read about below, some meteorologists are even openly postulating that there may not be enough moisture to avoid another drought next year.  Yes, things are really bad this year, but when you step back and take a look at the broader picture they become truly frightening.

According to the U.S. Drought Monitor, as of July 31st close to two-thirds of the continental United States was experiencing at least some level of drought…. 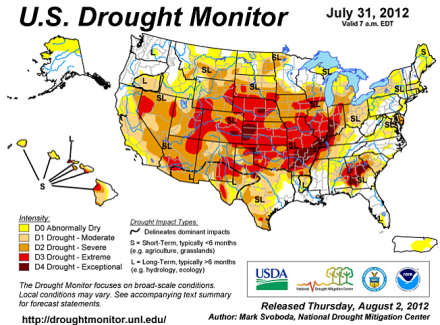 Keep in mind that brown is “severe drought”, red is “extreme drought” and dark brown in “exceptional drought”.

This is truly a historic drought.  We have never seen anything like this in modern times in the United States.

The week before, this is how the U.S. Drought Monitor described conditions in the center of the country….

There had been some hope that rain would bring relief to farmers in the central part of the country, but instead things just keep getting worse and worse.

At this point, close to half of all corn being grown in the U.S. is either in “poor” or “very poor” condition.

For ranchers, the outlook is even more dismal.  The following is from a recent CNN article….

Nearly three-quarters of the nation’s cattle acreage is now inside a drought-stricken area, as is about two-thirds of the country’s hay acreage, the agency reported.

What that means is that a lot of animals are being slaughtered now and the price of meat is going to be moving substantially higher later in the year.

The following is what the CEO of Smithfield Foods, Larry Pope, recently told the Financial Times….

He also told the Financial Times that he expects meat prices to rise by “significant double digits”.

Those are very frightening statements.

The CEO of a major food company says that beef is going to “be too expensive to eat”?

That doesn’t sound good at all.

Meanwhile, this drought is absolutely devastating farmers and ranchers all over the United States….

“When I was a kid in the ’50s … it got real dry, but nothing like this,” said Marvin Helms, a 70-year-old farmer and rancher in central Arkansas who was compelled to sell his beef cattle after being short on feed.

His thousand acres of farmland near Arkadelphia include corn and soybeans, which Helms says is normally sufficient to sustain his family and provide for his cattle.

“We’ve got some insurance on the crops, but it’s not enough,” he said. “It will help, but it won’t pay the bills.”

It is hard to describe how oppressive the heat and the drought have been in the middle part of the nation this year.  We have seen some unprecedented things happen.

For example, it got so hot in Oklahoma recently that it started melting the street lights.

Of course the main problem in Oklahoma right now is the horrible wildfires that are ravaging the state.  The following is from a recentChicago Tribune article about those fires.

Wildfires burned out of control on Friday in Oklahoma, destroying homes and shutting down highways in a state that has suffered 18 straight days of 100-plus degree temperatures and persistent drought.

Emergency officials counted 11 different wildfires around the state, with at least 65 homes destroyed in parched areas north and south of Oklahoma City and south of Tulsa.

Oklahoma joins several states that have been plagued by wildfires this summer, including Colorado, Arkansas and Nebraska. Fires are being fed by a widespread drought.

But these fires in Oklahoma are only part of a very distressing long-term trend.  As I have written about previously, 6 of the 10 worst years for wildfires ever recorded in the United States have all come since the year 2000.

Another major change that we have seen is that massive dust storms called “haboobs” are becoming much more frequent in the southwest part of the country.

Just the other day, a dust storm that was approximately 2,000 feet high and nearly 100 kilometers wide ripped through the city of Phoenix, Arizona at 35 miles an hour.

Such events were once very rare in Phoenix.

Meanwhile, much of the central and western United States is rapidly running out of water.

And I am not just talking about surface water.

A lot of the key aquifers that have allowed us to build cities and irrigate crops in the western half of the United States are being drained completely dry.  The following is from a recent San Diego Union-Tribune article about what is happening in California….

Few places in Southern California is that more evident than the desert sands of Borrego Springs, where residents, farmers and golf course operators are sucking about four times as much water from the ground each year as nature replaces.

They’ve been pumping so hard for so long that the community’s main aquifer could essentially run dry after a few more decades. That’s a dire possibility: A recent study showed it would be prohibitively expensive to build a pipeline to an outside source.

Did you catch that last part?

The truth is that someday entire cities may have to be abandoned because it will be “prohibitively expensive” to build water pipelines stretching hundreds of miles to bring them water.

Sadly, this is not just happening in California.  This kind of thing is going on all over the nation….

Similar concerns are bubbling up along San Diego County’s backcountry and across the nation — particularly in places such as the Central Valley and the Great Plains, where residents have dug deep to withstand a drought that has squeezed the nation’s midsection dry.

“It took Mother Nature in some cases thousands of years to accumulate the water in the aquifers, but we are pumping it out in mere decades,” said Robert Glennon, a law professor and water expert at the University of Arizona. “It’s a huge national and international problem. … It is utterly unsustainable and scary.”

So even when this summer ends our problems will be far, far from over.

But right now the most immediate concern is the condition of our corn and our soybeans.

Corn is found in about 74 percent of the products we buy in the supermarket, and it is used to feed livestock all over the country.

In addition, the United States exports more food to the rest of the world than anyone else does.

So if our crops fail that is a very big deal.

Right now, it is being reported that this drought “will likely cost the U.S. food export industry billions in lost revenue.”

Considering the fact that the “employment rate” in the United States is lower than it was during the last recession and that the U.S. economy is in the midst of a horrible long-term economic decline, this is the last thing that we need.

And what happens to all of the countries that are depending on us for food?

A recent Wired article had this startling headline….

“U.S. Drought Could Cause Global Unrest”

When people cannot feed their families, they tend to lose it.

According to a recent article in the Guardian, some scientists say that the drought has been so bad this year that it is going to take a “freak event” to avoid catastrophic damage to next year’s corn crops….

What matters now is whether there will be enough rain to get next year’s crops off to a good start.

“This drought isn’t going anywhere,” he said. “The damage is already done. What you are looking for is enough moisture to avert a second year of drought,” he said.

However, Svoboda conceded that might require a freak event, especially in the mid-west which has already passed its rain season. “In the entire corn belt, from Indiana to Nebraska to the Dakotas, we have already reached the maximum precipitation periods for year. From here on in, it’s all downhill,” Svoboda said.

“As far as widespread general relief for the whole region it would take a really freakish dramatic change to make that happen. That doesn’t appear to be in the cards, given the time of year we are in.”

The skies are dry and our fields are scorched.

Our crops our failing and millions of acres are burning.

Our groundwater supplies are being rapidly depleted and giant dust storms are sweeping across some of our major cities.

Welcome to the new normal.

It isn’t going to be pleasant. 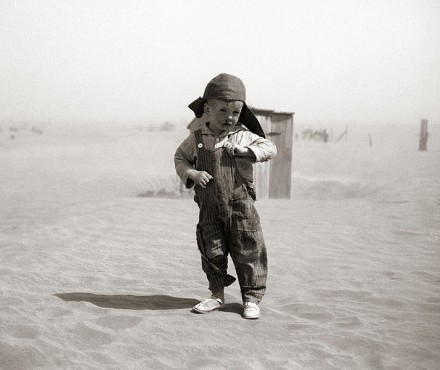