If you needed another reason to avoid taking your children down the cereal aisle at the grocery store, here it is: insidious cereal box characters seem to be trying to make eye contact with your kiddos.

While it’s no surprise that marketing techniques like product package design and placement in stores are used to attract buyers, some methods are more exploitative than others. Directing advertising to adults who understand marketing tactics and have the ability to make informed decisions is quite different than employing psychology-based tricks designed to lure innocent kids into brand loyalty.

According to the American Psychological Association:

Most children under age 6 cannot distinguish between programming and advertising and children under age 8 do not understand the persuasive intent of advertising. Advertising directed at children this young is by its very nature exploitative. Children have a remarkable ability to recall content from the ads to which they have been exposed. Product preference has been shown to occur with as little as a single commercial exposure and to strengthen with repeated exposures. Product preferences affect children’s product purchase requests and these requests influence parents’ purchasing decisions.

Cereal companies know this, and they have long exploited that vulnerability through the use of charming and engaging cartoon characters in their commercials and on their packaging. They are the third biggest food marketer to children – and they spend millions trying to entice children to buy their products, according to a 2012 report by The Yale Rudd Center for Food Policy & Obesity:

Companies spent $264 million in measured media on kid-targeted cereals last year, up 34% from 2008, according to the report, which analyzes the nutritional content and advertising habits of 16 brands the center determined to be aimed directly at children. General Mills, which accounted for eight brands in the report such as Lucky Charms and Trix, spent the most at $142 million, a 27% increase from 2008, according to the report. Kellogg Co. hiked spending by 47%, shoveling $108 million into five kid-targeted brands, including Frosted Flakes and Froot Loops. Post Holdings increased spending by 17% to $13.8 million on its two child-targeted brands, Pebbles and Honeycomb.

Researchers at the Cornell University Food and Brand Lab conducted a study to examine the influence of cereal box spokes-characters. The results of that study were published earlier this week, and the findings were interesting.

From the researchers’ report, Eyes in the Aisles: Why is Cap’n Crunch Looking Down at My Child?:

In a study of 65 cereals in 10 different grocery stores, Cornell researchers found that cereals marketed to kids are placed half as high on supermarket shelves as adult cereals—the average height for children’s cereal boxes is 23 inches verses 48 inches for adult cereal. A second key finding from the same study is that the average angle of the gaze of cereal spokes-characters on cereal boxes marketed to kids is downward at a 9.6 degree angle whereas spokes-characters on adult cereal look almost straight ahead.

The researchers wanted to know if the characters really do make eye contact with children, so they studied the angles. Here’s what they found:

In a two-part study, researchers confirmed that the cereals targeting children are placed about 23 inches off the ground and those aimed at adults 48 inches high. After studying 65 cereals and 86 “spokes-characters” they found the cereals on the top shelves have characters staring straight ahead or slightly up to make eye contact with adults. For the lower boxes with cartoon characters with large inviting eyes, the gaze is focused slightly downward, to create eye contact with children.

Then the researchers examined how much the eye contact with cereal box spokes-characters influences feelings of trust and connection with a brand:

63 individuals from a private northeastern university participated. They were asked to view a Trix box and rate their feelings of trust and connection to the brand. Participants were randomly shown one of two versions of the box, in one version the rabbit was looking straight at the viewer and in the other the rabbit looked down. 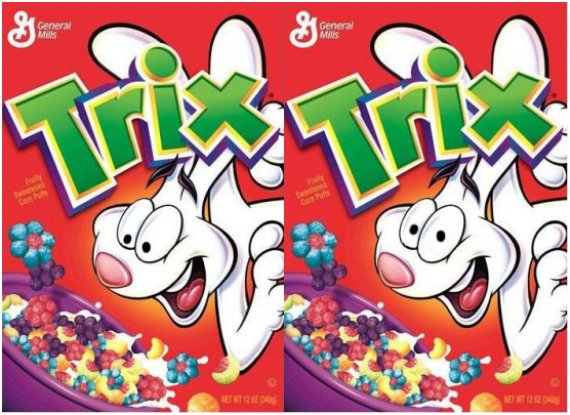 Whether or not the eye positioning on the boxes is deliberate has not been determined:

When contacted for comment, Kellogg’s did not directly address the study, but noted that it follows industry guidelines on marketing food to children.

“Personally, I don’t think it’s a deliberate strategy.” Aner Tal, a post-doctoral research associate at Cornell, told The Huffington Post on Wednesday. “I think it’s incidental… But the finding could be used for good.”

One way? The findings could help companies market healthier cereals to younger kids, Tal suggested. For now, Tal recommends some basic advice for those who want to make conscious, smart decisions at the grocery store: “Stick to the shopping list.” (source)

Dr. Brian Wansink, one of the researchers, summarized the findings and offered two key take-aways from the study: