Antarctica has long been surrounded in mystery, intrigue, secrets, and controversy.

In December 2016, NASA reported that a huge crack in the massive continent appeared on satellite imagery. At the time, it was reportedly 300 feet wide and stretched for 70 miles.

The massive crack is in Larsen C, a shelf floating off the Antarctic Peninsula.

Ice shelves are the floating parts of ice streams and glaciers, and they buttress the grounded ice behind them; when ice shelves collapse, the ice behind accelerates toward the ocean, where it then adds to sea level rise. Larsen C neighbors a smaller ice shelf that disintegrated in 2002 after developing a rift similar to the one now growing in Larsen C.

Experts warned that when the crack eventually spreads across the entire ice shelf, it will create an iceberg the size of the state of Delaware:

Larsen C is Antarctica’s fourth-largest ice shelf, and it holds back the land-based glaciers just behind it: Once the ice shelf goes, those slow-flowing glaciers have one less barrier in their journey toward the sea.

It looks like that prediction is being proven correct.

But radar mapping shows that a second crack has split off from the main rupture like a snake’s forked tongue, members of the Antarctic research group Project MIDAS reported May 1. That second branch, which stretches around 15 kilometers, didn’t exist on radar maps taken six days earlier, the scientists say.

If either branch makes it to Larsen C’s edge, the shelf could calve off a 5,000-square-kilometer hunk of ice, creating one of the largest icebergs ever recorded, says glaciologist Adrian Luckman of Swansea University in Wales. “The new branch is heading off more toward the ice front, so it’s more dangerous and more likely to cause this calving event to occur” than the existing branch, he says.

All that is currently keeping the nearly 2,000 square mile piece of ice from floating way is 12 miles of ice, and it isn’t likely to hold for much longer. 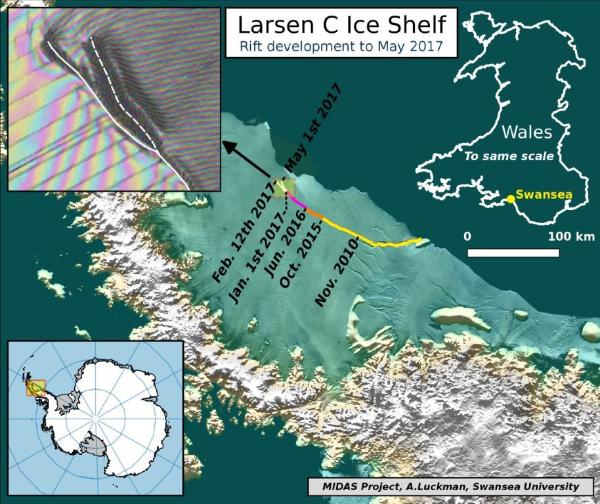 The current location of the rift on Larsen C, as of May 1 2017. Labels highlight significant jumps. Image credit: Swansea University