July 26, 2012 – The Washington Post has just published an article with the very misleading titled, “Turkey a hub for Syria revolution as illegal border crossing points abound,” in which it describes “Salafi Muslims,” who have “come to offer help from the countries of the Persian Gulf region” arming and joining the so-called “Free Syrian Army.” The article also claims “weapons are ferried into Syria, delivered by Turkish military trucks and picked up by fighters on the other side in the dead of night.”A more apt title would be, “Turkey hosts invading Saudi and Qatari mercenary army.”This confirms earlier reports featured in the New York Times and the Washington Post, that not only are the Gulf States of Saudi Arabia and Qatar funding and arming militants via Turkey, but that the US is coordinating the logistical aspects of the operation as well.

Likewise, CNN has attempted to spin concessions made by its own Ivan Watson, traveling with sectarian extremists into Syria, where it was admitted:

Meanwhile, residents of the village where the Syrian Falcons were headquartered said there were fighters of several North African nationalities also serving with the brigade’s ranks.
A volunteer Libyan fighter has also told CNN he intends to travel from Turkey to Syria within days to add a “platoon” of Libyan fighters to armed movement.

On Wednesday, CNN’s crew met a Libyan fighter who had crossed into Syria from Turkey with four other Libyans. The fighter wore full camouflage and was carrying a Kalashnikov rifle. He said more Libyan fighters were on the way.

The foreign fighters, some of them are clearly drawn because they see this as … a jihad. So this is a magnet for jihadists who see this as a fight for Sunni Muslims.

CNN then attempts to claim the “real” Syrian “revolutionaries” “do not want an Islamist political agenda to be mixed in with their revolution.” 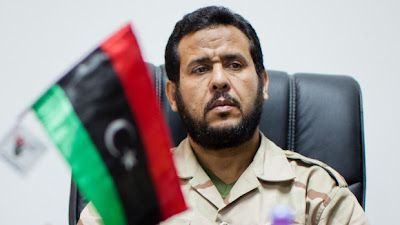 Photo: The face of Libya’s “revolution” was literally Al Qaeda. Abdul Hakim Belhaj, commander of the Libyan Islamic Fighting Group (LIFG) listed by the US State Department as a “Foreign Terrorists Organization,” was armed and backed by NATO (including the US) in his efforts to topple the government of Libya. Belhaj more recently pledged (NATO) weapons, cash, and Libyan militants to the “Free Syrian Army.”

Unfortunately for CNN, despite its best efforts, it cannot qualify its claim that these foreign fighters are “unwanted,” – for the so-called “Free Syrian Army” (FSA) has long since exposed itself as a sectarian extremist front infiltrated with foreign fighters and foreign weapons,stretching back as far as 2007.

Perhaps as a sign the Gulf States of Saudi Arabia and Qatar are stretched to the limits of their ability to covertly undermine Syria, they have announced plans to seek “UN General Assembly action” for a “political transition and establishment of a democratic government in Syria.” For the despotic, unelected, grandiose nepotism of Saudi Arabia and Qatar to call for a “democratic government in Syria” is truly a move made as much out of desperation as it is one of farcical hypocrisy. 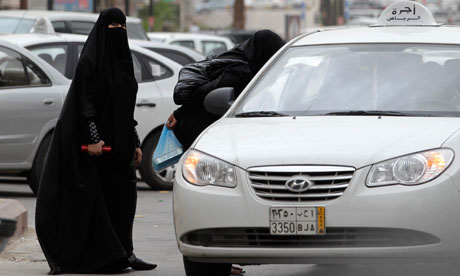 Image: In “progressive” Saudi Arabia, who is calling for a “democratic transition” in Syria, women are not even allowed to drive, let alone vote for their leaders – who with Qatar, are amongst the few remaining absolute monarchies on Earth.

Both Gulf State nations are run by absolute monarchies – some of the only kind still left in the world. In Saudi Arabia, not only are elections out of the question, but women are in fact, prohibited from even driving. How the Saudis themselves are not subject to UN resolutions, open condemnations, sanctions of all kinds, and ultimatums over their own dictatorship is a true indication of the bankrupted, hypocritical, self-serving dysfunction that punctuates a Western corporate-financier dominated “international order.” It is an “international community” that creates the illusion of urgency and injustice when it seeks to expand its interests into one nation, but conveniently ignores real injustice when it jeopardizes their interests elsewhere.


Turkey Supports Subversion of Syria, While Crushing Dissent at Home

Turkey itself has been waging a decades-long bloody campaign against its own armed uprising in predominately Kurdish areas bordering Syria, Iraq, and Iran. In fact, at one point, the US allowed Turkish tanks to cross into American-occupied Iraq to attack villages suspected of harboring armed Kurdish separatists in 2008, mirroring the very tactics Turkish PM Recep Tayyip Erdoğan is now condemning Syria for. The Guardian reported in their 2008 article, “Iraq demands Turkey withdraw from border conflict with Kurds,” that the conflict had been raging since 1984 and had cost the lives of 40,000 people.

Turkey has in recent weeks, violated Iraq’s airspace in order to strafe and bomb Kurdish villages inside Iraqi territory. Iraq has lodged a complaint with the UN Security Council – a complaint likely to go unnoticed.

One can only imagine the “threat” Syria would be portrayed as if it were to likewise strafe and bomb targets beyond its borders in pursuit of now admittedly foreign-armed, foreign fighters invading its country via Turkey. Turkey, a NATO member since 1952, would most likely invoke “Chapter V” of NATO’s treaty, a mutual defense clause that makes an attack on one alliance member an attack on all members – thus opening up the door for more direct foreign military intervention.

Turkey’s ruling government led by PM Recep Tayyip Erdoğan is in fact undermining its own national security by running errands for NATO versus Syria. By supporting foreign terrorists invading neighboring Syria, it undermines the legitimacy of its own campaign against Kurdish rebels within its borders, not to mention beyond them. Turkey’s current stance vis-a-vis Syria is not shared by all members of Turkey’s government, and at this critical stage, now more than ever they need to make their voices heard both to the Turkish people and to the people of the world.

Carving Out “Safe Havens” for the US State Department’s SNC

The ultimate goal of inundating Syria with foreign fighters and weapons while Saudi Arabia and Qatar farcically call for a “democratic transition” in Syria is to create a “safe haven” from which the US State Department coached and directed “Syrian National Council” (SNC) can rule from – further dividing and undermining the Syrian nation-state.

The US foreign-policy think-tank, Brookings Institution blueprinted designs for regime change in Libya as well as both Syria and Iran. In their report, “Assessing Options for Regime Change” it is specifically stated (emphasis added):

“An alternative is for diplomatic efforts to focus first on how to end the violence and how to gain humanitarian access, as is being done under Annan’s leadership.This may lead to the creation of safe-havens and humanitarian corridors, which would have to be backed by limited military power. This would, of course, fall short of U.S. goals for Syria and could preserve Asad in power. From that starting point, however, it is possible that a broad coalition with the appropriate international mandate could add further coercive action to its efforts.” –page 4, Assessing Options for Regime Change, Brookings Institution. 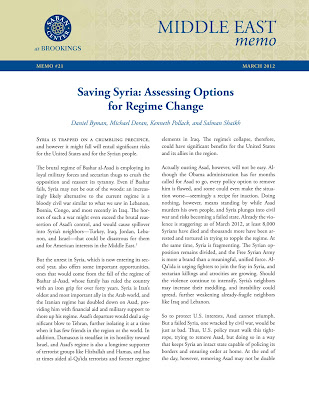 Image: Also out of the Brookings Institution, Middle East Memo #21 “Assessing Options for Regime Change (.pdf),” makes no secret that the humanitarian “responsibility to protect” is but a pretext for long-planned regime change.

The Brookings Institution’s “safe havens” and “humanitarian corridors” are meant to be established by NATO-member Turkey, who had been threatening to partially invade Syria in order to accomplish this. And while Turkey claims this is based on “humanitarian concerns,”examining Turkey’s abysmal human rights record in addition to its own ongoing armed campaign against the Kurdish people both within and beyond its borders, it is clear they are simply fulfilling the agenda established by their Western patrons on Wall Street and in the city of London.

There is still extreme danger that with Aleppo still under threat by foreign fighters and the so-called “Free Syrian Army,” NATO is preparing cross-border provocations to justify the “limited military power” Brookings calls for in establishing its prescribed “safe havens.” Fabricated “massacres,” “humanitarian crisis,” and false flag attacks involving chemical weapons are also pretexts the West might use for a limited military incursions into Syria in an attempt to cripple its military and lend its militant proxies a “safe haven” in Syria to rule over.