North Korean dictator Kim Jong Un’s rhetoric over nuclear weapons and the possibility of war with the United States and its allies makes almost no plausible sense considering that their long range missile capabilities are lacking and their military hardware is reportedly outdated when compared to the militaries of developed western nations. While the communist regime does have millions of soldiers at their disposal, the notion that North Korea will start and win a war against the U.S. seems outlandish.

So, either Kim Jong Un’s recent actions are a part of internal posturing to keep the North Korean populace compliant through propaganda, or the young leader has been empowered by an ace up his sleeve that the North’s enemies do not yet fully understand.

The idea that the Democratic People’s Republic of Korea may have a secret weapon of sorts may sound far-fetched, but not everyone considers it an impossibility. With the U.S. deploying naval assets to the region and Chinese troops mobilizing en masse at the border, there is a distinct possibility that a military clash of some type is in the works.

In December of last year, the DPRK launched an orbital satellite, which left many wondering about its payload. Could it be that this ‘space launch vehicle’ is carrying a star wars type nuclear weapons package?

Some U.S. officials seem to think so, and they’re sounding the alarm:

U.S. officials quietly are expressing concern that North Korea could use its “space launch vehicle” to explode a high-altitude nuclear device over the United States, creating an electromagnetic pulse that would destroy major portions of the U.S. electrical grid system as well as the nation’s critical infrastructures.

The concern is so great that U.S. officials who watch North Korea closely are continually monitoring the status of the North Korean “space launch vehicle,” whose status could suggest a pre-emptive nuclear strike against the United States.

They are aware of the three-stage missile North Korea launched last December that also orbited a “package,” which experts say could be a test to orbit a nuclear weapon that then would be deorbited on command anywhere over the U.S. and exploded at a high altitude, creating an EMP effect.

This concern recently has been reinforced by a little-publicized study by the U.S. Army War College that said a nuclear detonation at altitude above a U.S. city could wipe out the electrical grid for hundreds, possibly thousands of miles around.

The impact would be catastrophic.

“Preparing for months without a commercial source of clean water (city water pressure is often dependent on electric pumping to storage towers) and stoppage of sewage treatment facilities will require net methods of survival particularly in populated areas,” the military study said.

The May 2011 study, titled, “In the Dark: Military Planning for a Catastrophic Critical Infrastructure Event,” concluded that there is “very little” in the way of backup capability to the electric grid upon which the communications infrastructure is vitally dependent.

Two years ago the North Koreans detonated a nuclear weapon that experts claimed had such a low-yield it posed no significant threat. However, EMPact President Dr. Peter Vincent Pry has a different assessment. He suggests that, while the blast may have been weak, if detonated at high altitude over the United States, the gamma rays emitted are powerful enough to disable the national power grid across the lower 48 states.

According to experts, a blast of this nature detonated 300 miles above the state of Nebraska would be a life-as-we-know-it ending event:

“Within a year of that attack, nine out of 10 Americans would be dead, because we can’t support a population of the present size in urban centers and the like without electricity.” 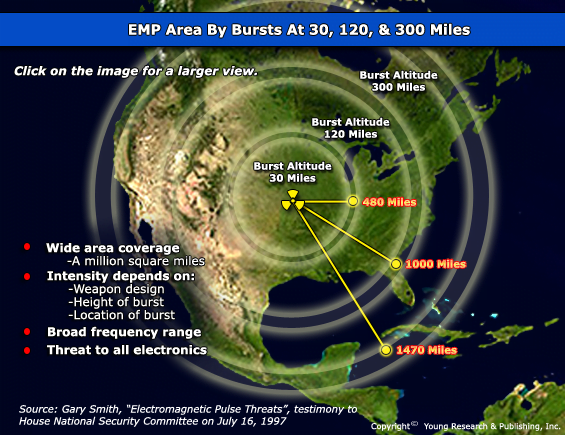 This begs the question: Is it possible that the payload on North Korea’s ‘space launch vehicle’ was actually a Super EMP, or electro-magnetic pulse weapon, that is now awaiting a ‘go’ signal from Kim Jong Un?

His arrogance certainly suggests he knows something we don’t. And with fellow North Korean rogue ally Iran recently claiming that 2013 will be the fall of the American empire, maybe this time North Korea isn’t just talking.

Super EMP weapons exist, and in all likelihood North Korea has such a weapon. They also have a space-based delivery system that may be capable of deploying it directly over the central United States.

Such a scenario is an outlier, but certainly not an impossibility.

Nuclear attack and electro -magnetic pulse weapons are two of the most dangerous man-made threats we face. Preparing for such an event is possible, but should it come to pass it would render all of our technological advancements over the last hundred years useless and would leave the United States no better off than a third-world nation.

An expert panel that Congress created to study such an attack says it would halt banking, transportation, food, water and emergency services and “might result in defeat of our military forces.”

“The consequences would be catastrophic,” said Joseph McClelland, director of the energy commission’s Office of Electric Reliability.

“It would bring down the whole grid and cost between $1 trillion and $2 trillion” to repair, said Rep. Roscoe Bartlett, R-Md. Full recovery could take up to 10 years, he said.

It only takes one madman with his finger on the trigger to change the world.

One of these days someone’s gonna’ push the button.