First a couple of definitions:

Fire: Combustion of materials in which substances combine chemically with oxygen to give off smoke, heat and light.

Smog: A combination of smoke and fog that is heavier than air and noxious.

The air over Beijing, China, is thick with an acrid, eye-watering haze that tastes bitter when you breathe it. For a month now, the noxious cloud has hung over the city. Its caused by the reliance China has on the burning of coal in its power stations and the massive amount it uses in industry.

Dulwich College, which sounds like it would be more at home in the London borough of the same name, is in Beijing’s Shunyi District. The fee-paying school has invested in a huge dome, essentially a large tent that will shield its well heeled pupils from the pollution outside. The Harrow International school has also gone further than most to protect the children that study there. They have installed a new air filtration system to keep the pollution at bay.

China has never been overly forthcoming about the level of pollutants in the air its citizens breathe. Only now is international pressure mounting enough that they are starting to admit to the horrendous levels of airborne pollutants getting into peoples lungs on a daily basis. Even so, some international observers doubt that the figures are as low as those sometimes quoted.

To understand why smog is so dangerous you only have to look back at the experiences of the UK some 50 years ago, all the while bearing in mind the vast scale of the pollution in China, in relation to that of the UK.

In 1956 the UK clean air act was passed. It had taken four years to propose, compile and pass and was introduced in response to the ‘Great Smog’ of 1952. That year the winter was cold and snowy and to keep warm people burnt far more coal than usual. This added to the huge amounts of smoke put out by coal fuelled power stations and industry.On December 5th 1952 an area of high pressure moved in over London and fog formed. These areas exert a downward force trapping anything underneath them, in this case fog and the copious amounts of smoke from the chimneys, both industrial and domestic. This dark smoke mixed with the fog forming smog. An almost complete lack of wind kept London blanketed for four days in this noxious mix. So bad was it that some reported that they could not see their feet. Just over 4000 deaths were attributed to the poor air quality during a two week period. 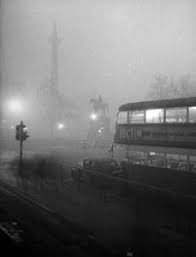 The legislation passed decreed that no dark smoke could be emitted from industrial or domestic chimneys, both would have to burn smokeless fuel from that point on. Further amendments to the act saw domestic open fires becoming a thing of the past, so much so that from 1960 most new homes were built without a chimney, such was the drive to cleanup the air. In industry dark smoke is measured on the Ringelmann scale (BS2742c) These acts have increased dependency on gas and electric for both domestic and industrial usage. At the time they were introduced  gas and electric were cheap and plentiful as well as being clean environmentally and within the home, no messy ash to clear up everyday and no problems with storage of fuel. Fuel insecurity had not even been considered, supply well exceeded demand and everyone was happy.

Industry cleaned up its act and the winter smogs so routine in my city childhood became a thing of the past. So, has it worked? Are less people dying from respiratory illness caused by air pollution? Well, no, actually more are. Each year it’s estimated that 29,000 people a year die from problems caused by air pollution, 4,300 of them in London based on DEFRA (Department of Environment,Food and Rural Affairs) figures. It should however be noted that measurements of particulate matter have increased in efficiency and accuracy and the levels have changed since 1952 so a truly direct comparison is very difficult to make

Of course they are blaming cars, and to be fair they have a point. A connection has been proved many times over between the volume of traffic and air pollution. The Los Angeles ‘carmageddon’ highway closure in 2011 positively impacted air pollution during and immediately after the closure. Having said that the congestion charging and low emission tariffs in place in London have thus far done little to improve air quality. EU regulations state that air quality must not exceed daily pollution levels more than 35 times in a year, London managed 36 times in the first 12 weeks of 2012.

What nobody is mentioning is that a huge number of people are re-opening their fireplaces and returning to the use of solid fuel. Most cities have quietly acknowledged this by introducing a list of solid fuel stoves that support 100% or as near as damn it 100% combustion of the fuels used. These appliances are government approved, and you can have one even in the heart of  the city if you have ￡2000 to buy one. Needless to say many are not bothering, actually, almost no one is bothering. In addition to the cost, once you have your approved registered appliance they can come and check to make sure you are burning approved registered fuel in it, yes there’s a list of approved fuel, from approved registered suppliers as well.

The result of this is very simple. Fireplaces are being opened up, chimneys swept and coal, smokeless and otherwise is being burnt, as is wood, paper and anything else that puts out heat. How do I know? Because the smell of it is in the air, and it’s getting stronger every winter. I would be doing the exact same thing if I had a chimney. Massively increasing domestic fuel costs are leading people back to solid fuel.

The manager of one of the largest estate agents in the UK said:

” Older houses with fireplaces are selling in less than half the time of newer properties. People know that at least they can heat one room if all else fails”

Domestic fuel costs continue to rise steeply. Heat or eat is a choice many make on a daily basis. I live literally yards away from hundreds of acres of conservation land, a lovely oasis that is managed by a handful of rangers on behalf of the city council. Dangerous trees are cut down but the logs left within the woods for small animals and insects to nest in, and to allow the wood to decay naturally. Well, that’s the theory, and that’s how it used to work. Now, within days, sometimes hours of the tree coming down the chainsawed lumps of wood are gone, people literally carry them away (you can’t get a vehicle in there). Leaving the wood in much larger chunks has had little effect, it gets attached to a skateboard, or put in a child’s stroller to be cut up when it arrives at its final destination.

With many coal fired power stations due to close, some as early as 2013 more and more people will return to using solid fuel to heat their homes, or even one room in their homes, rather than be without heat when the rolling blackouts start. The UK is barely balancing energy supply and demand as it is but taking power stations off line will put the nation in a position where demand outstrips supply and blackouts are therefore a foregone conclusion. Particulate matter will build in the air. Coal, smokeless fuel and wood all disperse these particles, particularly coal, but it is cheaper than both smokeless fuel and seasoned wood making it economically attractive.  If large numbers of people continue to move towards solid fuel the smogs will to some get worse in cities such as London and Los Angeles and may even appear in areas that have previously not been affected.

Smog or not people will do whatever they have to in order to keep warm, its human instinct. The smogs will have to be dealt with as and when they happen. In my opinion, its just another reason added to an ever increasing list of why we should vacate the cities as soon as humanly possible.
Take Care
Lizzie