In a rare and recently unearthed interview from 1965, the actor who preceded William Shatner as first captain of the Enterprise, stated that the series was based on the RAND Corporation’s “projection of things to come”.

Actor Jeffrey Hunter, who played captain Christopher Pike in the Star Trek pilot “The Cage” told a Hollywood columnist in January of ’65 that he hoped the pilot-episode would be picked up as a series because he was intrigued by the fact that the series was based on the RAND corporation’s “projection of things to come.”

“We should know within several weeks whether the show has been sold.”, Hunter stated almost half a century ago.

“It will be an hour long, in color, with a regular cast of a half-dozen or so and an important guest star each week.”, he stated hopefully.

“The things that intrigues me the most”, Hunter said, “is that it is actually based on the Rand Corporation’s projection of things to come. Except for the fictional characters, it will be like getting a look into the future and some of the predictions will surely come true in our lifetime.”

Trekweb, the first Star Trek website ever to appear on the internet, republished part of the recently discovered interview with Hunter in the context of celebrations around the historic pilot-episode- considered by many “Trekkies” to be the blueprint of the entire Star Trek project. As Trekweb notes, the character of Captain Pike “remains a popular character with Trek fans.” 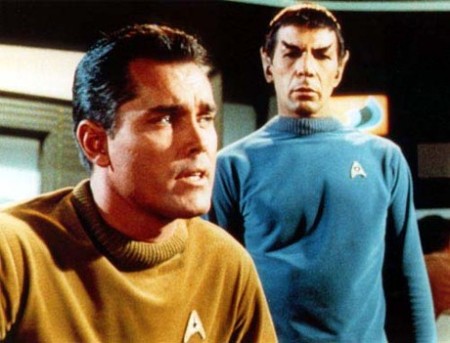 According to one Star Trek-dedicated website, the involvement of the RAND corporation in the series was limited to “technical advice” by RAND researcher Harvey P. Lynn Jr. As Trekplace points out, Lynn “provided Star Trek’s original series creator Gene Roddenberry with scientific and technical advice during preproduction of the series.”

According to Lynn’s son (Harvey P. Lynn Jr. died in 1987) in response to a question from Trekplace’s Greg Tyler in 2002, his father “worked at RAND as a liaison Officer between RAND and Project Airforce.”

In RAND’s own FAQ the question whether a RAND researcher designed the initial bridge of the Enterprise, is irritatingly anwered with the statement that Harvey Lynn was indeed “consulted, but as a private citizen, not as part of a RAND project.”

This is clearly at odds with the spontaneous statement made by Hunter, namely that the entire Star Trek series was based on RAND’s “projection of things to come”. Furthermore, a 2002 MSNBC article (Cached version) titled Is Star Trek in our future? noted that Lynn was not merely consulting on the pilot episode of the series, but was intimately involved in the creation of several aspects of Star Trek which have become part of our cultural nomenclature. The article also expands on the relationship between the series creator Gene Roddenberry and “Liaison officer” Harvey P. Lynn Jr:

“Lynn, it turns out, was an invaluable resource. He had been referred to Gene through Colonel Donald I. Prickett, an old Air Force buddy from his days as a pilot during World War II. “I am going to forward a copy of Star Trek to a physicist at Rand,” Prickett wrote Gene after he had read an early summary of the series. “He’s a retired AF type and I can count on him to keep it to himself – he is a creative, scientific thinker and will appreciate your concepts.”

Despite of RAND’s own statement that Lynn was consulted as a “private citizen”, the article goes on to say that “At first Lynn worked informally on the series. Later he was paid a whopping $50 per show for the use of his brain and expertise. He contributed indispensable insights that helped shape ideas like the ship’s computer (he suggested that it talk, in a woman’s voice), the sickbay (he suggested that beds be outfitted with “electrical pickups” that monitor the body) and teleportation.”

Predictive programming as a way to introduce certain “possible” technologies is an aspect highlighted in great detail by researcher Alan Watt. Watt, naively described on Wikipedia as a “conspiracy theorist”, is the first to accurately and thoroughly communicate the concept of predictive programming:

“A subtle form of psychological conditioning provided by the media to acquaint the public with planned societal changes to be implemented by our leaders.

If and when these changes are put through, the public will already be familiarized with them and will accept them as ‘natural progressions’; thus lessening any possible public resistance and commotion.”

Societal changes can range from premonitions of “possible technologies” to desired political and/or economic objectives. One might say that Star Trek is a predictive programming parade, as anyone who studies the series finds an abundance of examples. On the technological aspects, foreshadowed in Star Trek, the following clip gives a good summing up:

Harvey Lynn’s role as a “technical adviser” is only part of this story. Notions such as “world government”, and a “federation of planets” are of course embedded within the series, as Gene Roddenberry’s vision was oriented towards a global society striving for “peace”. Of course to get his project launched, Roddenberry had to tolerate certain alterations and adjustments on the insistence of his benefactors. In retrospect it’s perfectly understandable that intelligence agencies had a more than average interest in the series. What better way to gradually introduce people to the concept of world government as a natural step in the evolution of things than through science-fiction. After all, the genre provides screenwriters a key to imaginative Valhalla- at the same time allowing RAND’s social engineers the perfect format for weaving its desired world government patterns into.

As Daniel Brandt wrote in his article Philanthropists at War, the interlocking system of “foundations” and think tanks after WWII were part of the push by central banks to establish, by stealth, a one world government. And this global system of control, as Carroll Quigley brought to light in his Tragedy and Hope, would not be some idealized “let’s all come together in peace” sort of political utopia. Rather this thousand-headed creature was forced into being and controlled by the major central banks on the planet acting in concert. Quigley, by the way, described the RAND corporation as “a private research and development firm, under contract to the United States Air Force.” Brandt wrote:

“Covert foreign policy became the standard mode of operation after World War II, which was also when Ford Foundation became a major player for the first time. The institute most involved in classified research was Rand Corporation, set up by the Air Force in 1948. The interlocks between the trustees at Rand, and the Ford, Rockefeller, and Carnegie foundations were so numerous that the Reece Committee listed them in its report (two each for Carnegie and Rockefeller, and three for Ford). Ford gave one million dollars to Rand in 1952 alone, at a time when the chairman of Rand was simultaneously the president of Ford Foundation.”

The involvement of RAND in Star Trek is presumably far from an isolated experiment. In a July 26 2011 article by Daniel Taylor of Oldthinkernews, the author writes about a trailer for the video game Deus Ex: Human Revolution, getting the people ready for a transhumanist future in which man merges with machine. Taylor points to a report prepared by RAND for the National Intelligence Council titled The Global Technology Revolution. In this 2001 report these themes are outlined as “possibilities”. These “possibilities” then magically find their way into fictional formats such as movies and video-games.

Being sort of a Star Trek fan myself, it is not with pleasure that I’m writing about these matters. But it’s exactly the familiar lust to escape from the present (and straight into some idealized vision of future society) which the elite adds to its arsenal to get the public to go along with its banker-controlled world government, albeit under the guise of a benevolent one.

Contributed by Jurriaan Maessen of ExplosiveReports.Com.