The brutal reality is that most Americans are not prepared for the next economic downturn or recession. The government shutdown is highlighting just how much Americans rely on others as opposed to themselves, and how little they have saved for an emergency.

According to the newest op-ed article by Market Watch, the government shutdown is perfectly proving that Americans are not prepared for a financial disaster of any kind, let alone an economic recession. Many have long assumed that the government (which as we all know is almost $22 trillion in debt) will be using their money (stolen funds aka, taxation) to bail out those who get themselves into trouble. But the shutdown is proving just how little the government actually does and just how financially illiterate many Americans have allowed themselves to become.

Almost 60% of Americans have less than $1000 in savings for a rainy day fund or an immediate emergency. It’s been ten years since the Great Recession left many Americans jobless with no money, and it appears most have learned nothing. The government shutdown serves as a painful warning and preview for what will happen once unemployment rises from 50-year lows.  Americans are far too dependent on others, including the government, for their survival.

Most Americans live paycheck to paycheck, including those who work for the government.  Many won’t live below their means in order to save and it certainly seems that most citizens have picked up the government’s spending habits. They have also stopped saving for themselves. According to a recent GoBankingRates survey, only 21% of Americans have more than $10,000 in savings, with nearly 60% having less than $1,000 in savings. Almost 32% of Americans have nothing saved up at all.

And something most don’t want to hear is that every economic cycle will end and hit a low again despite the rosy attestations of those who wish to keep confidence high. There is nothing in history that suggests that extremely low unemployment can be maintained for an extended period of time. Indeed, it is precisely at the end of an economic cycle that low unemployment rates tend to reverse rather suddenly. 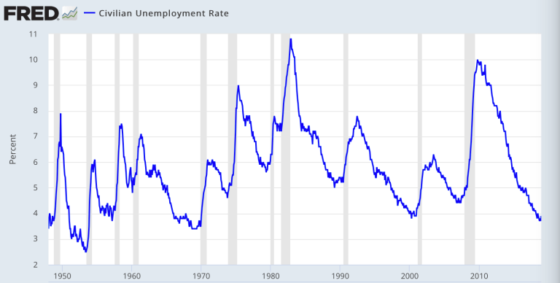 There is one way to prepare for a recession and it’s to end dependence on debt and save some money for an emergency. Without the shackles of credit card debt, student loan debt, and car payments, Americans could not only save more, but their money would go much further as no one has already claimed it in the form of debt repayment.

How Prepare For An Economic Downturn: Go Debt-Free In 2019