For the second time during recent anti-regime protests, a mass mobilization is planned to begin this Monday, December 9, 2013 at 9:39am at Democracy Monument. Universities across Bangkok are setting times and locations for pre-rally staging. Protesters who individually attended the last mobilization, the largest in modern history, are better organized for this coming Monday – gathering their own smaller groups to join larger staging areas for a mass march across the city. 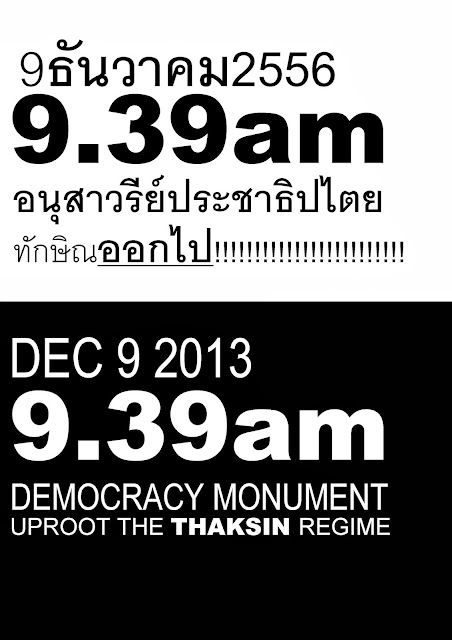 According to even the Western press, who has thus far attempted to shelter the Wall Street-backed regime, at least 200,000 protesters filled the streets last month, dwarfing entirely anything the regime has ever accomplished even at the height of its popularity. Since then, the regime has used excessive force, made draconian threats, and even unleashed armed militants to create bloodshed – further alienating itself, and galvanizing the Thai people.

Many of the individual pre-mobilizations will be as large as a typical pro-regime rally. These will then march across the city and merge. The last mass mobilization was peaceful, even festive.

This Monday, the message is a non-violent one, for the regime to see and hear the voices of the people who reject it wholly and will no longer comply with its entrenched, abusive power.

Video: While the regime uses camera tricks to “fill” even a single stadium, this was taken overhead of last November’s mass-mobilization, near Bangkok, Thailand’s Democracy Monument using a camera drone. The protesters can be seen stretching out in all directions. Other roads were similarly filled. This Monday, December 9, 2013, Thais will have another chance to participate in a similarly unprecedented gathering.