Last week we commented that based on TIC data, while “Belgium’s” unprecedented Treasury buying spree continues, one country has been dumping US bonds at an unprecedented rate, and in March alone Russia sold a record $26 billion, or 20% of its holdings.

So as Russia is selling record amount of US paper, what is it buying? For the answer we go to Goldcore which tells us that…

The Russian central bank has again increased its gold reserves by another 900,000 ounces worth $1.17 billion in April.

The following is a summary from Bloomberg of the April data template on international reserves and foreign currency liquidity from the Central Bank of Russia in Moscow: 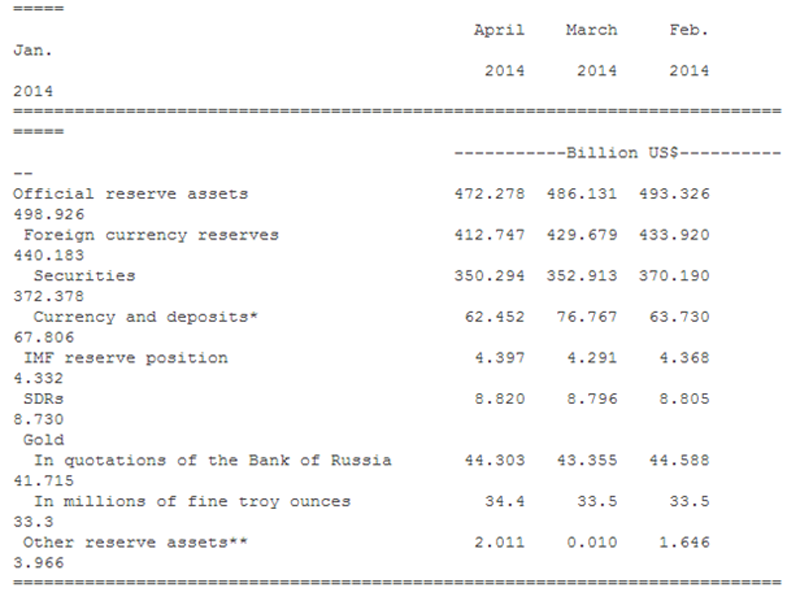 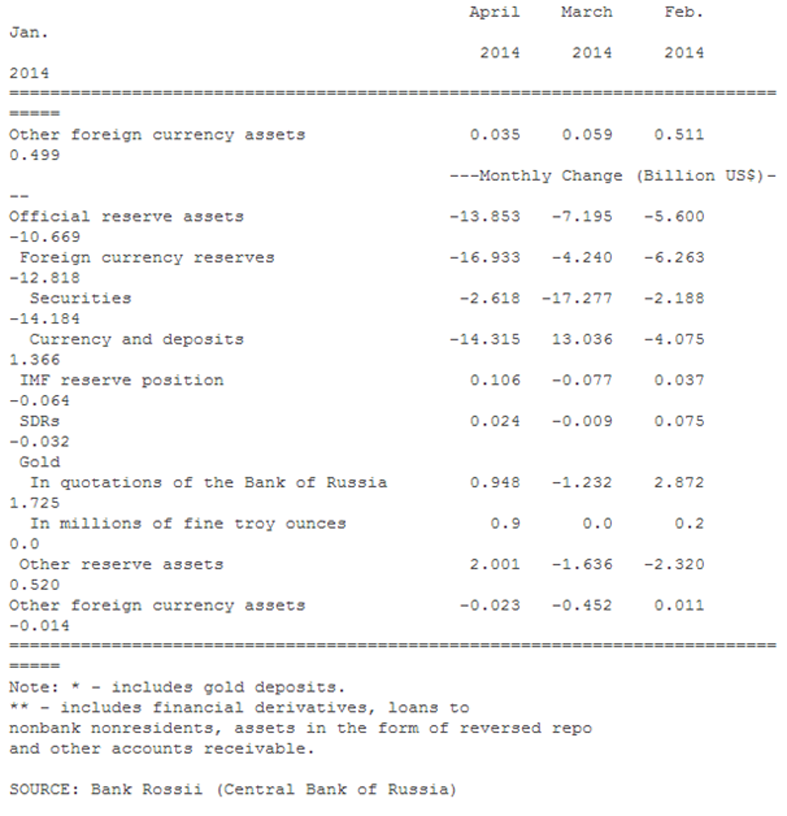 The 900,000 ounce purchase is a lot of physical gold in ounce or tonnage terms but as a percentage of Russian foreign exchange reserves it is a very small 0.24%.

Gold as a percentage of the overall Russian reserves is now nearly 10%. This remains well below the average gold holding as a percentage of foreign exchange reserves of major central banks such as the Bundesbank, Bank of France and the Federal Reserve which is over 65%.

The Russian central bank has been gradually increasing the Russian reserves since 2006 (see chart above). On average they have been accumulating 0.5 million troy ounces every month. Therefore, the near 1 million ounce purchase in April is a definite increase in demand.

This was to be expected given the very pronounced geopolitical tension with the U.S. and west over Ukraine. Indeed the TIC data shows that Russia has been aggressively divesting themselves of U.S. Treasuries.

Russian holdings of U.S. Treasuries fell very sharp, by nearly $50 billion, between October and March 2014 or nearly a third of Russia’s total holdings. Over half of the plunge came in March, when $26 billion was liquidated as western sanctions were imposed. TIC Data for April won’t be available until June and will make for very interesting reading.

Especially given the mysterious huge U.S. Treasury buying that is being done by little Belgium. This has analysts scratching their heads and has aroused suspicions that the Fed and or the ECB may be behind the huge Belgian purchases.

Russia has already made their intentions regarding gold very clear. Numerous high ranking officials have affirmed how they view gold as an important monetary asset and Putin himself has had many publicised photos in which he very enthusiastically holds large gold bars.

On May 25th 2012, the deputy chairman of Russia’s central bank, Sergey Shvetsov, said that the Bank of Russia plans to keep buying gold in order to diversify their foreign exchange reserves.

“Last year we bought about 100 tonnes. This year it will be less but still a considerable figure,” Shvetsov told Reuters at the time.

The World Gold Council reported yesterday that central bank purchases were 70% above their 5-year quarterly average, led by Iraq and Russia. The Eurozone actually became a net buyer thanks to Latvia joining the single currency union, adding its gold to the Eurozone reserves as part of the Euro treaty.

Russia may be planning to give the ruble some form of gold backing in order to protect the ruble from devaluations and protect Russia from an international monetary crisis and the soon to return currency wars.

Russian central bank demand and indeed global central banks demand is set to continue as macroeconomic, monetary and geopolitical uncertainty is unlikely to abate any time soon. Indeed, it may escalate substantially in the coming months as we move into the next phase of the global debt crisis.