While completing a recent purchase on Amazon.com, I was hit with a Prilosec ad served up on the Amazon.com shopping cart. The ad screams, “ONE PILL EACH MORNING. 24 HOURS. ZERO HEARTBURN*.” (See ad image, below.)

The * character, by the way, refers you to the bottom of the ad where it says, literally:

Huh? It’s “possible” to have zero heartburn when taking their drug? Since when did “it’s possible” meet the “gold standard of evidence-based medicine” we’re told these drug companies adhere to?

“It’s possible” means “maybe.” As in, “ZERO HEARTBURN… MAYBE.” That would be a more accurate headline. And that’s no more scientific that just wishing and hoping for zero heartburn. (Placebo may, in fact, work better than the drug.)

Promoting drugs as if they were nutrients

But there’s more to this deceptive ad being run by Amazon.com to sell these dubious pills. The headline also blares, “ONE PILL EACH MORNING,” implying that you can pop these like vitamins. The drug is actually positioned as an essential nutrient, as if you need one each and every day just to stay healthy.

Yet in the small print at the bottom of the ad, consumers are hit with this ominous warning:

Do not take for more than 14 days or more often than every 4 months unless directed by a doctor.

This statement directly contradicts the headline claim of “ONE PILL EACH MORNING.”

And then, to top it off, the fine print concludes with, “Not for immediate relief.”

That’s because Prilosec is actually a drug that interferes with digestion. It leaves many food elements undigested where they can go on to cause food allergies, digestive tract inflammation, weird skin reactions and all sorts of other problems. While the ad claims “Larry the Cable Guy” is an “actual user” of Prilosec, I don’t think any rational person would look up to Larry the Cable Guy as an example of optimum human health. Larry the Cable Guy also has probably near-zero knowledge of nutrition, pharmaceuticals, side effects and the deceptive behavior of modern-day drug companies.

In summary, the Prilosec ad being run by Amazon.com is highly deceptive. The two primary claims made in the headline — “ZERO HEARTBURN” and “ONE PILL EACH MORNING” — turn it to be utter lies. By running this ad, Amazon.com is peddling these lies on its own customers while contributing to the epidemic of toxic drug side effects now ravaging the U.S. population and causing widespread chronic health problems.

Look to the right to see the Prilosec ad running on Amazon.com. [edited for formatting – see photo below] 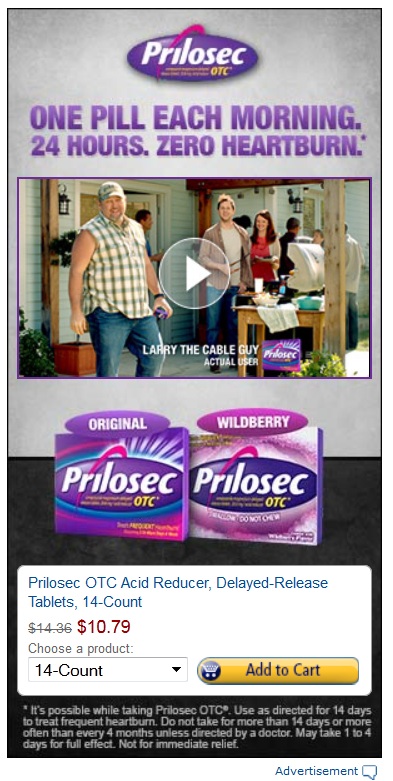 I get that Amazon.com has a legal right to run different ads, but doesn’t the company also have a moral responsibility to make sure its ads aren’t deceptively peddling a potentially toxic product that had already been documented to cause serious harm to many people?

Prilosec is made by none other than Procter & Gamble, a company steeped in animal cruelty, questionable research, and whose board of directors have deep ties to weapons manufacturers.

P&G was caught in 2003 conducting laboratory experiments on dogs via the Sinclair Research Center which was contracted to produce test results for IAMS pet food (owned by P&G). As Sourcewatch.org reports:

The investigation found dogs had gone crazy from intense confinement in barren steel cages and cement cells. Dogs were left piled on a filthy paint-chipped floor after chunks of muscle had been hacked from their thighs. They had also been surgically debarked. Severely ill dogs and cats were languished in cages without veterinary care. Iams representatives toured the facility and witnessed dogs circling their cells and sweltering in the summer heat, yet did nothing about it. The USDA investigated PETA’s complaint and cited the laboratory for failure to provide veterinary care and pain relief; adequate space; and employee training; along with almost 40 other violations of the Animal Welfare Act.

According to a website called “Uncaged”, P&G’s animal torture protocols have also included forcing hamsters to inhale large amounts of “nano-sized” particles; forcing mice to consume synthetic musk and other fragrances; and even forcing dogs to eat large amounts of a cleaning chemical by pumping it directly into their stomachs.

“It’s hard to think of anything more vicious than poisoning and killing animals for the sake of tinkering with cosmetics and washing power formulas,” writes Uncaged. “P&G are responsible for relentless cruelty its most calculating.”

P&G has also been a member of the American Legislative Exchange Council, a “corporate bill mill” that pressures state and federal legislators to pass laws that accomplish things like whitewashing the dangers of synthetic chemicals.

None of this seems to bother Amazon.com which happily pushes P&G drug products to its customers through the use of extremely deceptive advertising headlines (which unquestionably violate FTC regulations on making false claims).

Read more about the atrocities committed by P&G at:
http://www.naturalnews.com/
http://www.sourcewatch.org/
http://www.corporatewatch.org.uk/?lid=247

Watch this playlist of videos exposing the cruelty of P&G:
http://www.youtube.com/playlist?list=PLA272951C9B9B2D12

The dangers of proton pump inhibitors

Prilosec is a “proton pump inhibitor” (PPI) drug. It’s side effects include:

Here are just some of the adverse reactions that have been reported in users taking Prilosec: (SOURCE)

Bottom line: Shame on Amazon.com for being a drug-pushing retail front for P&G

These days, we expect drug companies to behave like mafia criminals. After all, many of the world’s largest drug companies are openly engaged in bribery of doctors, felony crimes of corruption, price fixing, payoffs, fraudulent drug research and much more.

But we don’t expect a company like Amazon.com to push the Big Pharma agenda to its own innocent customers. That’s a violation of code of ethics for Amazon.com, a company that otherwise goes out of its way to practice many forms of corporate responsibility. If Amazon.com is going to run ads promoting dangerous drugs that harm people, who doesn’t it also sell books with titles like, “How to kill people with chemicals?”

That’s what the drug companies are doing, of course, and Amazon.com seems to be helping them accomplish the task. Shame on you, Amazon. We expect better from you.

Continue Reading
You may also like...
Related Topics:advertisements, Amazon, prilosec